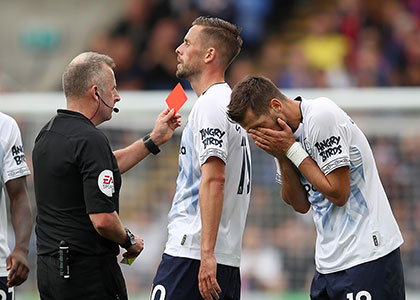 Everton and Crystal Palace ground out their second goalless encounter at Selhurst Park of the calendar year and the Blues will be ruing another two points that got away despite Morgan Schneiderlin's dismissal.

The Frenchman was already on a yellow card when he caught Luka Milivojevic and referee Jon Moss gave him his marching orders, capping a hugely frustrating afternoon for Marco Silva who lost André Gomes to injury late in the first half.

Vicente Guaita made a vital save in the first half after Gylfi Sigurdsson had missed an early sitter while Patrick van Aanholt came to Palace's rescue in the second when he cleared the ball off his goal line with his keeper beaten, while Jordan Pickford made two fine stops to preserve a clean sheet at the other end.

Just as they did in this fixture in late April, Everton dominated proceedings but too often lacked the guile and penetration to break down a stubborn and physical Palace side determined to do everything to break up the visitors' rhythm.

Yet Everton, starting with a familiar starting XI on the pitch — only Yerry Mina and Gomes weren't in the team that faced Palace three and a half months ago — and three of their new signings on the bench, should have broken the deadlock with just two minutes gone.

Lucas Digne picked Sigurdsson with a cross from the left but with the whole goal to aim at, the Iceland international bobbled a poor shot wide.

A tricky corner routine then almost caught Roy Hodgson's defence just before the quarter-hour mark but Richarlison's shot was charged down.

Everton were enjoying plenty of space down the right flank during the first half but a swirling wind made conditions difficult and it wasn't until late in the period that their next clear chance arrived.

Digne's shot deflected into the path of Coleman who looked to have broken the deadlock popping up at the back post but Guaita got a crucial hand to the shot to keep it out and Bernard's clipped cross as the move continued was glanced wide of goal by Dominic Calvert-Lewin.

Everton were almost caught napping as half-time approached and Hodgson's men finally started to make some inroads into the visitors' defence. Max Meyer was put in but Coleman recovered to deflect his shot over the crossbar and Scott Dann wasted a good chance with a header from the resulting corner.

Silva was forced into an unwanted change minutes later, though. Involved in a full-blooded tackle a few minutes earlier that left him hobbling on his ankle, the Portuguese had to be substituted which handed a debut to new signing Jean-Philippe Gbamin.

The Ivorian enjoyed some positive early touches as Everton carried their ascendency into the early stages of the second half and Sigurdsson no doubt thought he had scored when he guided Digne's volleyed centre on target but Van Aanholt hacked it off the line.

Schneiderlin was then booked for clipping Jordan Ayew and pounding the air in frustration with the referee and was booked for his troubles at a time when Palace were starting to come more into the game.

Twice Pickford was called upon in the space of two minutes to deny Ayew after Gbamin had been caught in possession and then Meyer who had been played in by Townsend in the 57th minute.

Sigurdsson tested Guiata with a low shot and Richarlison curled an effort a couple of feet wide when he might have done better before Silva introduced his second debutant of the afternoon in the form of Moise Kean.

The Italian came on for the industrious Calvert-Lewin with 20 minutes to go but his hopes of making an instant impact were undermined to a degree by Schneiderlin was shown his second yellow card seven minutes later. The No.18 needlessly followed through with a tackle on Milivojevic, forcing his manager to withdraw Sigurdsson and put Tom Davies on to help shore up midfielder.

With Wilfried Zaha on as a substitute, Palace occasionally threatened in the closing stages but their overall lack of quality told, leaving the game to peter out to a disappointing 0-0 draw.