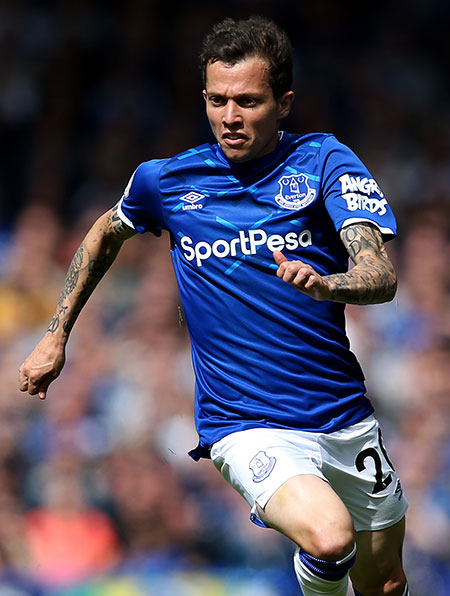 Everton ground out an important victory in their first home game of the 2019-20 season thanks to Bernard's early strike.

The Brazilian latched onto Lucas Digne's long pass to drive into the box and fire home with 10 minutes on the clock to give the Blues the lead, one that proved to be uncomfortably narrow, particularly over the final hour of the contest.

Richarlison missed two good chances to at least work Ben Foster in the Watford goal and substitute Moise Kean came within inches of opening his account for his new club in the closing stages while, at the other end, Craig Dawson hit the woodwork and Jordan Pickford made a vital save to deny Troy Deeney an equaliser.

André Gomes was passed fit to start despite withdrawn with an injury at Crystal Palace last week and new signing Jean-Pierre Gbamin was given the nod over Tom Davies alongside him as Marco Silva made just one change from the opening day. Kean and Alex Iwobi were named on the bench.

Everton began the stronger of the two sides and Digne had the first sight of goal with an effort from distance that sailed wide before he drove a direct free-kick off the top of the defensive wall after Gylfi Sigurdsson had been fouled in a dangerous area.

The breakthrough came seconds later as Everton successfully repelled a Hornets attack and Digne sent Bernard away down the left flank. The diminutive winger cut inside his man and drilled a low shot through his legs past the unsighted Foster to make it 1-0.

While they would carve the home defence open a couple of times over the course of the game, Watford's greatest threat came from aerial balls and set-pieces and when they won back to back corners midway through the first period, Dawson popped up at the back post to head goalwards but saw his effort come off the post with Pickford beaten.

Yerry Mina escaped a strong penalty claim by Gerard Deulofeu 10 minutes before the break and Pickford had to pull off a save to keep the visitors at bay but Silva's men could have doubled their lead a few minutes later. Sigurdsson picked Richarlison out with a free-kick delivery but the Brazilian planted a free header over the crossbar.

The second half was uncomfortably even from the Everton perspective but the Blues had chances to put the match to bed even as Watford looked capable of wiping out their advantage.

Richarlison was put into the clear by Pickford's excellent ball in the 57th minute but wasted the opportunity with a poor pass and two minutes later, the No.7 despatched another uncontested header over when he had to at least hit the target.

In between, Watford had counter-attacked effectively and fashioned a gilt-edged chance for Deeney when Deulofeu played him in but Pickford was off his line quickly to block the striker's shot with his face.

Roberto Pereyra headed over from close range and Abdoulaye Doucouré fluffed his lines after the ball had ricocheted favourably into his path in front of goal but after Digne had been forced off through injury, the closing stages almost belonged to Kean who made a hugely encouraging cameo off the bench.

The Italian raced into space down the channel before turning inside and lashing a shot high and wide of goal in the 88th minute. Then, with a minute of injury time played, Kean profited from determined work by Bernard to collect the ball just inside the area, touch it wide of his marker but screwed his shot the wrong side of the post.

Everton held out the remaining moments to claim their first win of the new campaign and prolonged Watford's winless sequence at Goodison Park, condemning Javi Gracia to his second successive defeat of 2019-20.

On the back of a strong display by Mina and Michael Keane in central defence, the result also extended to six games the Toffees' run of clean sheets that stretches back to February.