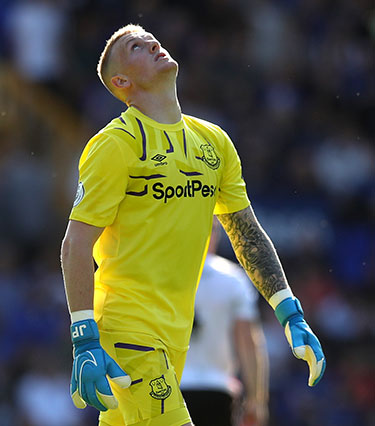 Everton slumped to their their third defeat in four games, their first at home since March, on the back of a dreadful performance against newly-promoted Sheffield United.

The Blues fell behind to another poorly-defended set-piece late in the first half and could find no way back into a game that manager Marco Silva desperately tried to salvage with three attacking substitutions in the second half.

His side were picked off on the counter-attack with 11 minutes to go when Lys Mousset scored his first Blades goal, sparking an exodus of frustrated Everton fans from the stands at Goodison Park in the closing stages.

In an attempt to bounce back from last Sunday's damaging defeat at Bournemouth, Silva made two changes to his starting XI, bringing Moise Kean in for Dominic Calvert-Lewin and Bernard for Alex Iwobi but the hosts toiled to create chances in what became an increasingly frustrating first half.

Richarlison whipped an early shot narrowly over the bar and Morgan Schneiderlin saw an effort deflected wide before Lucas Digne forced a parrying save from Dean Henderson.

Everton's most reliable avenue to goal came from a succession of corners won as attempted crosses were blocked behind but they failed to cause Sheffield any problems from any of them before they were undone by a dead-ball situation at the other end.

United won a corner on their left in the 40th minute that was swung in dangerously to the near post where Jordan Pickford missed his punch amid slight interference from Callum Robinson and the ball bounced in off the hapless Yerry Mina. The Blades were ahead without having had a single shot on goal.

Everton could and should have pulled themselves level within three minutes when excellent work by Kean ended with the teenager chipping a perfect ball across for Richarlison but his header in front of goal lacked power and Henderson was able to save.

Silva waited just nine minutes after half-time to make two substitutions, withdrawing Bernard and Schneiderlin and introducing Iwobi and Cenk Tosun and Kean had a chance shortly afterwards that was blocked by the advancing keeper at the expense of another corner that failed to beat the first man.

Seamus Coleman was sacrificed at the back in favour of Theo Walcott but apart from successive blocked shots from Iwobi and Tosun, Everton were struggling to make inroads into the Sheffield defence.

Then, as they were still pushing for an equaliser, they were carved open by Everton Academy product John Lundstram who fed Mousset with a perfectly-weighted pass that put the forward in behind the defence and he slotted past Pickford to make it 2-0.

The defeat leaves the Blues in the wrong half of the table with just seven points from six games and mounting question marks over how the team can regroup and rediscover the form that saw them win six home games in a row prior to today.