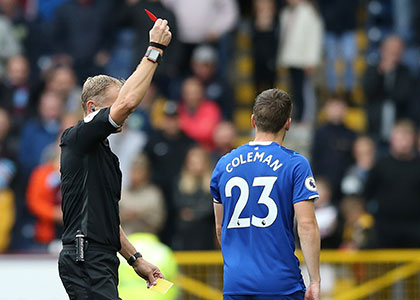 Everton and Marco Silva lurched further towards a state of crisis with a fourth successive defeat as they lost narrowly to Burnley at Turf Moor.

The Blues had to play the majority of the second half with 10 men after Seamus Coleman was sent off for two clumsy fouls; they then conceded from yet another set-piece without offering much at the other end even with a full complement of players.

With the pressure on his shoulders increasing following a poor start to the season, Silva eschewed calls for change to the 4-2-3-1 system he has consistently deployed but restored Alex Iwobi to the starting XI after the Nigerian international began last week's loss to Manchester City on the bench.

André Gomes, available again after recovering from a rib injury, was on the bench, with Morgan Schneiderlin deployed again alongside Fabian Delph.

Operating in the nominal No 10 role, Gylfi Sigurdsson had an early opportunity to test Nick Pope in the Burnley goal with a free-kick that the keeper pushed away for a corner while Aron Gudmondsson headed straight at Jordan Pickford for the Clarets but, on the whole, it was uninspiring stuff from both sides.

In what was a warning siren that would go unheeded by the visitors, Burnley came close to opening the scoring shortly before the half-hour mark. A corner from the Clarets' left was swung over everyone in the six-yard box to Jeff Hendrick at the far post but Pickford kicked his shot away to safety.

Burnley then survived a scare off a corner of their own when Yerry Mina and Michael Keane went up for the ball, it bounced goal-wards off a defender and Dwight McNeil hacked it off the line.

Everton's brightest moment of the game almost created the breakthrough five minutes before half-time. Coleman evaded his man smartly in the box, Sigurdsson prodded his cut-back on and Iwobi swivelled and shot but his goal-bound effort was blocked by Matthew Lowton.

Then, just before half-time, Coleman overran the ball and caught Erik Pieters with an unintended but ugly-looking late challenge, leaving the fullback in visible pain that would eventually force him off early in the second half.

Not long after Richarlison had fired at Pope and Pieters had been substituted, Coleman exited the game when he caught McNeil in the head with his shoulder following through in an aerial challenge. That left referee Graham Scott with little option but to brandish a second yellow card.

Silva sacrificed Sigurdsson for Djibril Sidibé but a re-run of Burnley's first-half corner routine badly exposed Everton's zonal marking flaws. Hendrick again popped up completely unmarked at the back post and this time he rattled his first-time finish past Pickford to score what would prove to be the winner.

Silva threw Moise Kean on for Dominic Calvert-Lewin and later gave Gomes some minutes towards the end but the destiny of the points seemed inevitable by that point.

Keane put a corner wide when it came off his shoulder with 12 minutes left and Jay Rodriguez forced a later save from Pickford but ultimately Everton's challenge petered out and they were left to rue another demoralising defeat, one that leaves them hovering one place above the relegation zone heading into the international break.