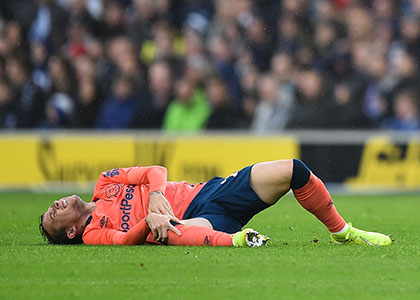 Everton's attacking midfield star Bernard has been diagnosed with a grade 2 medial knee ligament tear, the club have announced.

The Brazilian slipped awkwardly in yesterday's 3-2 defeat at Brighton and had to be withdrawn with just 30 minutes on the clock.

The 27-year-old left the American Express Community Stadium on crutches and now faces an as-yet undetermined spell on the sidelines, with recovery times for the injury anywhere between 6 and 12 weeks.

A statement from Everton read: "Medical staff will speak with the Club's knee consultant in the coming days to ensure the fastest possible return to play".


Phil Greenough
1 Posted 27/10/2019 at 16:44:47
It's hard to rationalise the amount of injuries and bad luck, Everton have suffered over the past few months.
Bill Watson
2 Posted 27/10/2019 at 16:51:06
Really bad news for the player and the club. Best wishes to him for a speedy recovery.
On a more positive note it may open up an opportunity for Moise Kean to show what he can do but with the current manager I'm not holding my breath.

Grade 2, with proper rehab/physical therapy, can be overcome in as little as 4 weeks. Though I'd prefer they go at least 6 so we don't get another Gbamin situation.

Only positive I can think of is that maybe now Marco Dope-o will be forced to play Kean, even putting Richy back out left where he loves to play. Of course it can be equally negative in that Silva will probably just move Iwobi left and stick the Icelandic statue in the middle of the field again.

[edit] Bill @2 didn't see that you wrote the same thing re: Kean. One can pray, mate, one can pray.

Paul Jeronovich
6 Posted 27/10/2019 at 17:22:44
We are a cursed club. It’s weird because if you look at Liverpool, the amount of pressing they get through in games plus champions league campaigns their injuries are minimal.
Derek Knox
7 Posted 27/10/2019 at 17:23:12
Ironic, one of our best sources of creativity will be missing for best part of what is left of the season. I know players do get injuries but it does seem to strike us worse than most other Clubs.

Can anything get any worse?

With what I can only trust will be a very disciplined, regimented rehab program, 4-6 weeks is by no means out of the question. Then again, this is the same medical staff that was behind Gbamin's rehab as well, so

Jim Bennings
11 Posted 27/10/2019 at 17:46:00
I’ve gone past the point of having feeling now, everything Everton related never brings any good news does it?
Dan Parker
12 Posted 27/10/2019 at 17:50:28
This is rapidly turning into a season from hell. Hard to see any positives.
Andy Crooks
13 Posted 27/10/2019 at 18:06:49
Really, what next? We have no luck. No luck, fearful players, fearful coach, players hiding, poor vastly overrated goalkeeper. No leaders, no guts, no heart, no passion. Relegation. Our coach and our players stink of it. Silva has got all that is needed to relegate us. Previous form, Martinez like stubborness, arrogance and the comfort blanket of a big pay day.

Silva will never get another job in the Premier League. No other club will touch him. Why we ever hired him defies belief. His goose is cooked. If he is not sacked he will relegate us. In my view we are in a worse position than when we sent for the fat man. Give it to Unsworth, then search the world for a winner.

I can't see where our next win will come from at the minute.

Joe McMahon
21 Posted 27/10/2019 at 18:50:52
The Hex on Everton continues. Strange how Liverpool's main players never get injured. A bit like they are guaranteed at least one penalty per game.

This is not going to be Everton's season in any shape or form. We are in shit creek, while you know who wins the title.

Wonder if he'll move Iwobi out left and start playing Sigurdsson in the 10 again. Wouldn't mind him trying Richarlison left, Iwobi central, Walcott on the right and Calvert-Lewin up top...

Let's home Bernard makes a full recovery, and best wishes to him.

Andrew Dempsey
27 Posted 27/10/2019 at 20:30:38
Fraser #25
It’s a really sad indictment of where we are, that, of the five players you mentioned in your post, 80% of them are no where near top-six standard.
Although, Iwobi does looks much better in the middle instead of Sigurdsson.
And Richarlison goes missing in plenty of games, but is also clearly our biggest goal-threat.
The biggest mistake Silva made on Saturday (as I’m sure many have already said, I’ve not looked at TW since the game)
is bringing Sigurdsson on.
Kean or DCL should have come on for Bernard, put up front, with Richarlison moving to the left. Simple, eh, Marco?
Keep the trio of Gomes, Davies and Iwobi together in the middle that had looked more effective than any line-up he’s tried this season.
But, no, he disrupts it to bring our record signing on.
It was kind of a chaotic game, and I can’t lay all the blame on Silva for this one mistake, but as the game wore on, the folly of this substitution became more evident, as there was no way he would have had the balls to sub Sigurdsson back off the pitch.

Really annoying and frustrating to be a blue at the moment.
Please don’t replace Bernard with Siggo in the next couple of months.

Mark Guglielmo
28 Posted 27/10/2019 at 20:49:33
Even while Bernard is out injured, Andrew, am I right? :-)
Jay Tee
29 Posted 27/10/2019 at 20:54:02
Paul at 6, " a cursed club". Perhaps Silva needs to go and pee on each corner flag to get rid of the curse. Like Barry Fry did at Birmingham.
Bill Gall
30 Posted 27/10/2019 at 21:21:57
You will have a better chance of winning the lotto than guessing the team that Silva will put out. There has been comments on here that in the sub appearances Kean has had he didn't look great, but he should be given a good run in the team as being able to score in a defensive type league, that is in Italy, he must have something to offer a team that can't score.
Simon Smith
31 Posted 27/10/2019 at 22:07:36
Feel for Bernard as he was looking the one positive recently.
Don’t worry though, one of the first team will come out and tell us that everything is in hand and that we are an ambitious club going in the right direction... blah blah blah blah f***ing blah
Steavey Buckley
32 Posted 27/10/2019 at 22:52:34
Bernard is an important player for Everton because he takes the ball forward having the skill. Bernard's replacement yesterday Sigurdsson lacking the skill to take the ball forward slowed the play down. To make matters worse, Everton have no ready alternative. Walcott is badly out of form and Kean is just learning his trade. Footballing matters at Everton are just going from bad to worse, yet, it is still a long ways to wait for the next transfer window to open, if there any players available who have the necessary skill.
Rob Marsh
33 Posted 28/10/2019 at 00:45:34
Bernard missing from selection will do us much harm, he's a tricky little scamp and can turn games.
Jim Wilson
34 Posted 28/10/2019 at 09:38:39
It might be an idea for Everton to stop buying injury prone players.

Everyone became Moshiri fans because he can pull a bigger loan in than Kenwright. Some were delighted to have a photo with Dan Meis.

Now look at us, another stage of Turmoil under Marvelous Moshiri.

Gbamin out, Bernard out, Gomes in and out, Mina in and out. Now you can see what the manager and the next manager are up against.

Where Everton is concerned, though, we can usually take some comfort from the fact that – just when we think things can't get any worse – well then they usually do... with big feckin' bells on.

But I agree Jim's comment is a bit silly.

I'm guessing he'll be back around Christmas time but hopefully not rushed back to help out a desperate manager which could ruin his and our season.

I believe he could play the No 10 role, a quick brain and quick get who sadly lacks the shooting ability of Siggy. I do understand why his strengths including work rate are being utilised on the left but, if Kean wants to play, he has to learn work rate, intensity, defending and link-up play is a part of the role of all modern-day forwards.