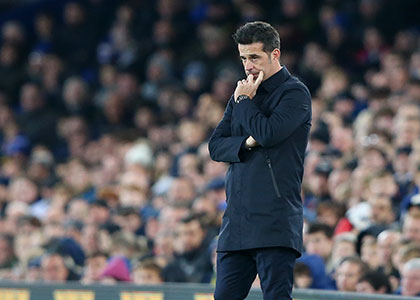 Everton collapsed to another damaging defeat on the back of a horrendous showing as bottom club Norwich recorded their first away win of the season.

Todd Cantwell's second-half strike kindled memories of Sheffield United's shock victory at Goodison Park earlier this season and after Marco Silva's side had laboured unproductively to try and force an equaliser, Dennis Srbeny slotted home in stoppage time to complete the sense of deja-vu.

The Blues left the pitch to loud boos that had begun when the Canaries, rock bottom of the table coming into the weekend, scored their second and they could have no complaints after turning in the latest in a number of dreadful displays.

Everton had started sluggishly and Norwich had had two fairly routine efforts on target before the home side's attack slowly started to make a few inroads. Cenk Tosun, starting in an unchanged team from the one that had lined up against Southampton a fortnight ago, lashed a shot wide after a one-two with Gylfi Sigurdsson and Theo Walcott came close to setting Richarlison up but his fizzed ball across goal just eluded the Brazilian.

Tom Davies had a looping header caught by Tim Krul at one end but the best chance of the half would fall to Onel Hernandez who was put in behind a lead-footed defence only to be foiled by Jordan Pickford's one-handed save.

Later in the first period, Cantwell popped up with a half-volleyed attempt that may well have flown in had it not taken a deflection off Morgan Schneiderlin and gone over the crossbar.

No doubt aware of the poverty of their performance in the first half, Everton became more dangerous early in the second, although they had to survive another scare when Lucas Digne had to come across smartly to close down, Teemu Pukki after the Finn had capitalised on acres of space behind Djibril Sidibé.

Three successive shots were blocked by the Norwich defence as Everton tried to press home a brief period of superiority but they were picked apart too easily at the other end in the 55th minute.

Yerry Mina and Mason Holgate got in each other's way as they tried to dispossess Pukki, he prodded the ball into Cantwell's path and the young midfielder advanced to place a shot wide of Pickford and inside the post to make it 1-0.

Silva responded immediately by withdrawing Schneiderlin in favour of Alex Iwobi but before the Nigerian could make an impact, Everton almost found themselves two down. Horrible defending left Sam Byram all alone in the box to meet a cross but he made a mess of a free header and planted it well wide.

Walcott and Sidibé were removed next as Dominic Calvert-Lewin and Seamus Coleman were thrown on and the Blues managed to fashion a few half chances with Calvert-Lewin almost getting his toe to a ball at the far post and Sigurdsson firing a couple of shots at the goalkeeper from the edge of the penalty area.

Iwobi created perhaps the best chance for Silva's men with a nicely-weighted pass that Tosun took early and fired towards the far corner but the goalkeeper palmed it away to safety.

Tom Davies tried his luck from 25 yards with another shot that was too close to Krul before the game entered stoppage time with Everton showing few signs of salvaging anything from the contest.

The nail was hammered in their — and perhaps Silva's — proverbial coffin with time running out when Sigurdsson inadvertently played the ball straight to Srbeny in the Everton box and he held off a challenge to eventually drag the ball past PIckford and into the corner of the goal to underscore an awful afternoon from the Toffees' perspective.

The defeat, Everton's seventh in 13 games, leaves Silva's tenure as manager seemingly hanging by a slender thread, with the discontent from the stands at the final whistle — both sets of fans sang "you're getting sacked in the morning!" — leaving Farhad Moshiri and the Board watching on from the Directors' Box in no doubt of the supporters' feelings.