Everton cling on to record another narrow win 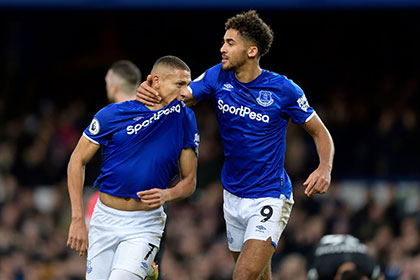 Everton survived an unnecessarily nervy final 10 minutes to hold out for their third win in four Premier League games thanks to Richarlison's fine goal.

Featuring three changes from the team that was embarrassed at Anfield last Sunday, Carlo Ancelotti's men needed to produce a visible response for their home fans and they initially did that with an accomplished first-half display.

With Bernard pulling the strings in midfield and Richarlison, Dominic Calvert-Lewin and Theo Walcott willing runners in forward areas, they carved out some promising openings in the first 45 minutes.

They should probably have had a penalty as early as the fourth minute when Walcott was played in superbly by Richarlison and was pulled back on the shoulder by Lewis Dunk but neither the on-field David Coote nor Video Assistant Referee Michael Oliver deemed it a penalty before Mat Ryan saved the winger's eventual shot.

Calvert-Lewin was denied by the keeper from a very tight angle after a quarter of an hour and went close after 25 minutes when his attempted cross curled inches wide of the far post before Ryan pushed Richarlison's low shot away.

The Australian could do nothing about the Brazilian's winner, however, in the 38th minute. Another slick Everton passing move ended with Lucas Digne crossing to Richarlison who took one touch past one defender, controlled impressively to wrong-foot another and then whipped a shot in off the far post.

Brighton had been unusually subdued in the first half but they came out from the interval intent on causing their hosts more problems and when Tom Davies was caught in possession just outside his own area, he was saved by the offside flag which took away a gilt-edged chance for Leandro Trossard who just had to beat Jordan Pickford.

That came moments after the Belgian had engineered an opportunity of his own but he had shot wide and it was followed by a chance for Neal Maupay but his effort was blocked by Michael Keane who had come into the side for Yerry Mina.

After another penalty appeal was waved away at one end when Martin Montoya barged Mason Holgate over in the box, Goodison's collective heart was in its mouth in the 53rd minute at the other as Trossard took advantage of the space afforded him and tried to curl a shot over Pickford but his shot came back off the crossbar.

Everton settled again and forced a save from Ryan when Calvert-Lewin prodded Bernard's cut-back into his chest from close range and the striker was denied again by the keeper after he had raced onto a ball over the top and held off the recovering defender long enough to get an accurate shot away.

Holgate almost diverted Trossard's cross into his own net but was relieved to see the ball fly over the crossbar before Richarlison powered onto another ball over the top but was denied by Dunk.

Everton thought they had sealed the points with 13 minutes left when Keane headed Lucas Digne's corner off the underside of the bar and Calvert-Lewin bundled it home on the goal-line but his goal was disallowed for handball following a check by VAR.

With Ancelotti having progressively introduced a more defensive posture by bringing on Fabian Delph, Seamus Coleman and Yerry Mina for Bernard, Walcott and Digne, Everton backed off in the closing stages and almost paid for it when Glenn Murray forced a good, one-handed save from Pickford.

The veteran striker looked certain to grab a point for the visitors in the 88th minute when Maupay's ball forward deflected into his path in front of Pickford but he poked the ball wrong side of the upright from Brighton's perspective.

The win means that Everton have collected 14 points from a possible 21 since Marco Silva was sacked on 5th December and have kept clean sheets in each of their last three home games.

It wasn't enough to lift the Toffees into the top half of the table but they remain six points off fifth place, four points off fifth and could have an eight-point cushion between themselves and the relegation zone depending on how the Sunday results go.

Quotes or other material sourced from ToffeeWeb Match Report page