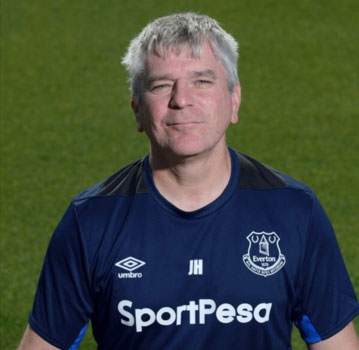 Club doctor John Hollingsworth, who only joined Everton last summer when he replaced Dr Aboul Shaheir, is credited with smart and quick actions in the immediate aftermath of Gomes's injury
André Gomes says that the speed of his recovery from a fracture dislocation of his ankle could be down in large part to the actions of John Hollingsworth in the immediate aftermath of the incident.

The Portuguese was left stricken on the Goodison Park pitch with his foot pointing 90 degrees in the wrong direction following Son Hueng-Min's impetuous lunge during Everton's home game against Tottenham last November but the club doctor's quick decision to reset his ankle might have been crucial.

Gomes feels that the decision to set his bone back in place without delay enabled him to undergo surgery in short order and that is why he was able to make his return to action just 112 days later when he came on as a substitute at Arsenal last weekend.

The former Barcelona midfielder is in line to make his first start since he feared his season might be over when Manchester United come to Goodison on Sunday and he spoke with the club's online channel about the injury, the support he as received from everyone connected to Everton and his gratitude to Hollingsworth and the rest of the medical staff at Finch Farm.

"I work with really, really good professionals and they were there from the first moment," Gomes told evertontv. "They helped me with everything, they helped my family as well, because it's not easy.

“[The doctors] were really, really important.

"I knew that he wanted to put my foot in the right place. Obviously I had adrenaline, I was upset, but I knew what was supposed to [happen] with these types of injuries, or at least [to act] as fast as you can.

"The doctor, he put my foot in the right place so it was really easy to mobilise my ankle and go to the hospital. It was really massive work, great. And maybe that helped a lot on my recovery and maybe to be able to have surgery straight away the next day.

Gomes was a little more colourful with his descriptions to the media in interviews he gave yesterday. He told The Guardian:

“I rejected the oxygen because with the adrenalin I was mad, I was angry. [The doctor] rotated my ankle twice, which I can tell you was painful. I was screaming and I could see people in the stand holding their hands to their faces and telling their kids not to look. I think I actually punched Luís Boa Morte [then Everton assistant coach] at some point because he was standing nearby.

“I knew my ankle was pointing in the wrong direction and I didn't want that image haunting me for the rest of my life. To this day I have refused to watch the videos or look at any of the pictures. I was already in pain before I fell, before Aurier tried to get the ball again.

“I knew instantly that something was badly wrong and I just tried to avoid everything. I'm glad I did that, because you rerun the whole incident in your mind hundreds of times afterwards; you can't help it.

"You keep thinking: ‘Why me?' Or: ‘I might have been all right if I had done something differently.' It's like a flashback that won't stop happening, so I really don't need the picture of my foot in my memory.”

Just as he did last weekend, manager Carlo Ancelotti says that while he feels Gomes is physically fit enough to start, it will be down to the player to make the decision as to whether he is mentally ready.

Gomes slotted into the team like he had never been away when he replaced Morgan Schneiderlin against the Gunners and the expectation is that he will be in the starting XI to face the Red Devils, especially as Schneiderlin will be missing following surgery of his own to repair a torn meniscus in one of his knees.

"If I play, I think it will be unbelievable," Gomes said. "It will be good to be back at home.

"I was there already to watch the games from the stand but it's not the same. I'm looking forward to being back with my family - with all Evertonians - and I want the three points.

"And to say thank you to everyone who was there to help me."

Let's hope that finally disposes of the widespread belief here that the Everton medical staff doesn't know its business.

I still can't believe he is back playing already.

Peter Warren
3 Posted 29/02/2020 at 07:50:49
Wow - fair play Gomes and our doctors. Shows how strong Gomes is physically and mentally. He also spoke previously about how down he got with the Barcelona move, to be able to do that also shows strength.

I was made up we signed him, love watching him play and hope he can improve his consistency as he is potentially one of the best midfielders in the business.

How fantastic it will be to see him tomorrow.

Good on everyone involved.

Colin Glassar
5 Posted 29/02/2020 at 08:47:52
I still feel queasy recalling the incident. Kudos to André and everyone involved for this amazing recovery.
Niall McIlhone
6 Posted 29/02/2020 at 10:28:02
Very revealing article, thanks Lyndon. What strikes me about Gomes is his clear will to succeed as a player, and his enjoyment of the game. We know it did not work for him at Barcelona, but he is not alone in that regard – look at Coutinho – but I am enthused by his positivity, and cannot wait to see a fully fit Gbarmin and Gomes next season.

Some are too quick to presume everything and everyone at the club is crap.

Dr. John Hollingsworth not only did exactly the right thing, he did so in public, in a high-pressure situation in front of 40,000 people.

I've already posted the following elsewhere, but it really is worth a watch. A compilation video of every touch of André's in the 30 minutes he played v Arsenal:

It is possibly Andre's finest 30 minutes in an Everton shirt. It made me recall the absurdly outstanding game Seamus played on his return following his own horrific leg break.

But I know from experience how difficult it is when your injured to do all the right mundane exercises to get you back to fitness. it's much easier to just sit back, switch on Netflix and open a bottle of wine.

From what I've read from Gomes, he was dedicated enough to get to the training facilities and hit the gym 2 hours before the physios arrived which is testament to the man's mental strength.

Hope he starts on Sunday and puts Man Utd to the sword.

Welcome back, André – go give it to the Manure today!

Hurray for André and his mental and physical strength.