Everton's hopes of forcing their way into the upper echelons of the Premier League could be hindered by the ongoing impact of playing games behind closed doors.

That is the view of football finance expert, Kieran Maguire, who believes top flight clubs may face huge financial difficulties if fans continue to be barred from attending matches.

According to recent research conducted by Betway Football, matchday revenue is worth £677 million per year to Premier League clubs.

The Toffees generate £14m on matchdays, a figure that represents approximately seven percent of their annual turnover of £188m.

Maguire, who authored The Price of Football, highlighted Bournemouth's situation as an example of the financial impact that being forced to play behind closed doors could have.

They rake in just £5m in matchday revenue out of a yearly turnover of £131m, but Maguire insists that losing the money could be hugely problematical. 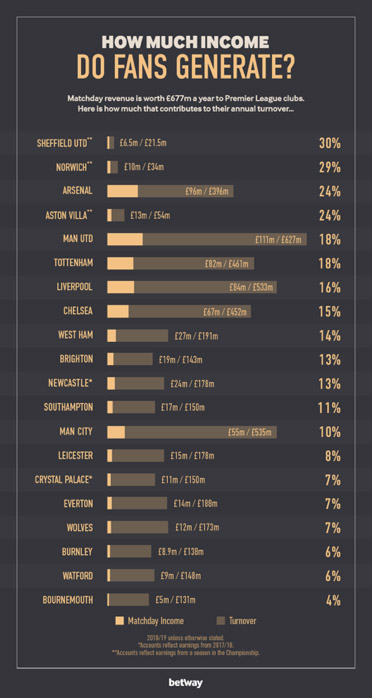 “£5m is still £5m - over the course of a season for Bournemouth, the money from a matchday will pay for the wages of two players,” he said.

“You can't keep on writing a cheque for £5m a month, even if you have got a decent amount of money in the bank to begin with.

“But Bournemouth lost £27m last season, so you add the loss of matchday income to that and it can only make the situation worse.”

With Everton's current finances dwarfed by the Premier League's biggest clubs, losing any amount of income would make it difficult for them to bridge the gap in the future.

Their £188m turnover is the eighth highest in the Premier League, just £3m behind West Ham United, but more than £200m adrift of Arsenal who are sixth in the standings.

Losing millions of pounds in revenue would certainly be damaging to Everton and Maguire believes they must quickly find other ways to make up the deficit.

He says that replacing lost matchday income will be vital to every club's hopes of not only remaining stable, but also growing in the future.

“They will be trying to claw that back in some shape or form,” added Maguire. “I think football might have to reinvent its relationship with fans in terms of its ability to offer an experience.

“Those clubs with good lines of communication to their fans will be successful, they will work hard to engage with them. The industry is big, but it's got to innovate.”