Stekelenburg to join Ajax next season 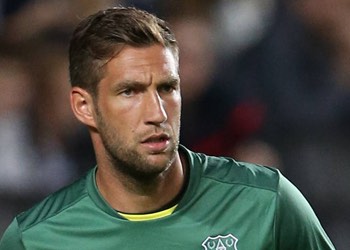 Maarten Stekelenburg has agreed a short-term contract extension to cover the remainder of the disrupted 2019-20 season but will join Ajax when the current campaign ends.

The Dutchman, who sighed for the Blues when his compatriot Ronald Koeman joined the club in 2016, had reached the end of his contract at Goodison Park and was going to be released this summer.

Everton have confirmed that the 37-year-old will leave after the final match of the season on 26 July.


Jack Convery
1 Posted 22/06/2020 at 16:47:46
Good luck to him. Will be best remembered I suspect for his heroics at the Etihad when he save two penalties. Need a back up keeper now, as Virginia might not be quite ready given his Reading outings.
Mike Gaynes
2 Posted 22/06/2020 at 17:56:54
It's been nice, Stek. Thanks especially for that memorable day. Certainly De Bruyne and Aguero will never forget you:

What exactly do you expect from a backup keeper? He's been a decent player for us.

Steve Ferns
6 Posted 23/06/2020 at 08:50:52
10 years ago this summer, 27-year-old Stekelenburg played in a World Cup final. He stuck around at Ajax for one more season, before a big move to Roma. He was in Rome for 2 seasons before losing his place in the starting XI at the end of the second season, and so he was sold to Fulham.

In his first season, they were relegated and there was a succession of managers and he lost his place as Felix McGrath oversaw the confirmation of relegation.

Due to his big wages, he was loaned out and so began the rest of his career as the “backupâ€. A swift fall from grace for the man who had only played in a World Cup final just 3 years before.

As a backup, he was great, particularly under Koeman where he played 36 games in successive seasons for Southampton and Everton. At Saints, he was on loan and deputised well for the injured Fraser Foster. With us, he was brought in as backup to someone who presumably never arrived and then stole the starting slot off Robles. The next season, a big money keeper did arrive and he's been back to dependable backup ever since.

Fulham sold him to us for an undisclosed amount. We can only assume it was small potatoes as they were desperate to get his wages off their books and Stekelenburg was eager to go to whoever would pay him to play in the top flight.

All in all, we got our monies worth. He was one of the best backups we've ever had, more than reliable when needed, and able to push the first choice keeper more than most backups. He also didn't sulk; he clearly trained hard. This was evident every home game where he warmed Pickford up like he was the keeper coach, and he seemed to be a natural to move into the position still held by a “tempâ€ in Alan Kelly, brought in by Unsworth in his first caretaker spell, and under Silva, he was with the U23s.

Cheers, Stek, all the best at Ajax.

Sam Hoare
7 Posted 23/06/2020 at 09:33:56
He's been solid though never quite good enough to really challenge Pickford. I guess it's very unusual for clubs to have 2 goalkeepers of supposedly similar ability, though I remember when Chelsea had Cech and Cudicini.

Presumably this will mean LÃ¶ssl getting promoted to full-time deputy. I guess Virginia will be looking for another (hopefully more successful) loan move.

Ajay Gopal
8 Posted 23/06/2020 at 10:17:36
The life of a backup keeper is very strange. You almost never get to play, but you are expected to train as though you are playing the next match. Stekelenburg has been a good backup keeper, and did not let us down whenever called upon. That is not a bad thing to say about a 2nd choice goalkeeper. Good luck to him in the future.
Martin Reppion
9 Posted 25/06/2020 at 13:25:58
Goalkeepers are like bass players. Each band only needs one but, if he becomes unavailable, the band can't play without a replacement. They are also, often, as mad as a box of frogs and a law unto themselves. They also have a tendency to believe (some with good cause) that they could do everyone else's job just as well.

Having a reliable replacement getting woodworm from sitting on the bench is a matter of luck. Usually the best ones are in their mid-thirties and arrive as an emergency signing covering an injury. They stick around when the Number One man returns to form and fitness, eking out a pension before going into coaching.

We'd like to have 2 top-flight keepers. But it isn't always going to happen. Stekelenburg never let us down. I hope the move works well for him.