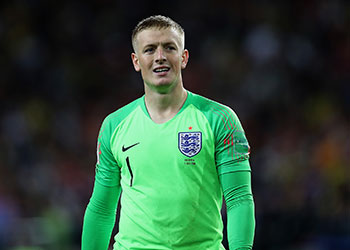 Jordan Pickford started and Michael Keane was on the bench as England narrowly beat Iceland in the Uefa Nations League this evening.

The Everton goalkeeper's status as first-choice goalkeeper for his country has been a source of speculation following his dip in form at the end of last season but Gareth Southgate has kept faith with him.

Keane, meanwhile, had to be content with a place among the substitutes with Joe Gomez Eric Dier preferred at centre-half.

And in a game of late drama, two dismissals and two penalties, Pickford kept a clean sheet. Raheem Sterling had put 10-man England ahead from the spot after Kyle Walker had been sent off.

Then when Gomez conceded a penalty at the death, Birkir Bjarnason put his spot-kick into the stands.

Let's see how he plays, and if he's improved his concentration and positioning etc.

I'd still start with Lössl for Everton, if we don't get another goalkeeper in.

Every player should be in the Everton starting line-up on merit.

Anyway, it's been a good day and let's hope this weekend gets better for Everton and Evertonians.

I think this wipes Jordan’s slate clean and gives him an opportunity to prove himself reliable next season. There’s Pope and Henderson who will be deserving of an opportunity if Jordan continues to struggle for Everton.

For what it’s worth I think he will have a much better season with a proper organised midfield unit shielding the defence.

Frank Crewe
4 Posted 05/09/2020 at 17:49:10
Pope needs to move to a bigger club than Burnley if he wants to shift Pickford. How about Everton? I hear they are in the market for a new keeper.
Michael O'Malley
5 Posted 05/09/2020 at 17:53:10
Who's bothered as long as his Everton No 1 spot isn't guaranteed this season. We definitely need some competition for him as he was woeful last season.
Patrick McFarlane
6 Posted 05/09/2020 at 17:56:53
If Pickford can take a leaf out of young Tryers's book, he'll be fine, everything the kid did today was quietly assured, no histrionics, no 'look at me' type behaviour, and the lad made some good saves too. If Jordan can manage to play with a level head most of the time, he'll prove an asset to the team.

Good for Southgate because it would have been very easy for the England manager to bow to the 'public' – or should that be media – pressure to rest him.

Andy Crooks
7 Posted 05/09/2020 at 18:25:25
Pickford passing the ball out. Taking it back from Keane. Then, knocking it out to Coleman. The transferring it to Digne, who passes it to Mina. Mina is pressed, knocks it to Tom, Tom knocks it to Seamus. Seamus gives away a corner.

Kean comes back, not having touched the ball in his 15-minute cameo, and heads it to the edge of the penalty area. The new West Brom striker fires a hit-and-hope shot. Pickford palms it out. The new West Brom left-back, Northern Ireland international by the way, taps it in. Pickford tears strips of defenders who look at each other and lament the fact that they have behind them the most utterly overrated goalkeeper in the history of football.

I imagine that the subscription for Sky/BT plus eleven days is pretty expensive. Did you watch next week's game at Tottenham, or has it not been on yet?

The last 2 seasons, all considered, it’s the serious issue, of his performances for EFC.

Get the club form to standard and good, but this hasn’t been the case.

I’f Jordan could mentally improve in terms of his approach and composure, then he’d have a chance, but for me, it’s almost time out, bar a miracle.

Time has flown, and he’s no longer a youth, and for EFC, there’s been too many bad messes on crosses, soft goals, crowd issues, and far too many kamikaze passes in front and across our defence, which to me shows, a lack of respect for the EFC, team.

The team, hopefully will improve and if so, if all the proposed signings, come through.

I’d employ Neville Southall, to help him improve, as I think it would be a help for him in his match approach planning.

Still, Carlo, will no better, but we’ll done, on an exceptional performance by Harry Tryer, and good signs, but hopefully, better signs all around for EFC.

First season, Pickford looked like a really good prospect; last season, it was almost like watching Joe Hart when he was on a decline... We definitely need this addressed. I don't think he's good enough, unfortunately!

Might be a confidence thing with the defence in front of him, I don't know, but for me, as well as a prolific striker to go with our newly formed midfield is definitely a must and fast!

If we get these “whispers” done, I think a very good season is ahead of us! Fingers crossed... 🤞🏻