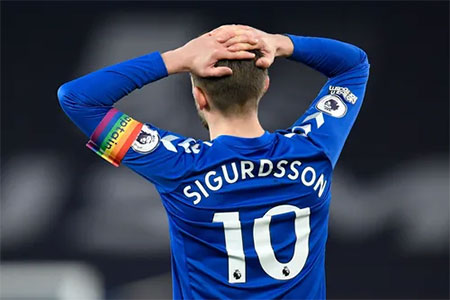 Everton's League Cup dreams died at the same stage as last season with a quarter-final defeat, this time to Manchester United who ultimately had the wherewithal in the final third that the Toffees lacked.

The final score may have been representative of the pattern of the first 20 minutes in which Everton were all at sea and United were slicing through them at will but it wasn't until the 88th minute that they finally breached Robin Olsen's goal from a player who, had VAR been in operation, probably wouldn't have still been on the pitch.

That was because Carlo Ancelotti's side managed to find their feet midway through the first half and looked at times as though they might be able to drag themselves over the line if they could grab a goal but that seemed less likely after a dazed Richarlison departed the fray following a collision with Eric Bailly in the 56th minute.

A late diving header by Gylfi Sigurdsson was as close as the Blues came to carving out a chance capable of winning the tie and, instead, it was Edinson Cavani who produced a moment of lethal finishing to win it before Anthony Martial rubbed salt into the wounds with a second as Everton were caught on the counter pushing for a stoppage-time equaliser.

With Seamus Coleman fit enough to start, the Irishman came into the side at the expense of Mason Holgate while Robin Olsen rotated back in for Jordan Pickford and André Gomes replaced Tom Davies in midfield.

That final decision from Ancelotti would prove to be a mis-step as the game passed the Portuguese by for almost an hour until he was replaced by Davies. Everton's midfield chased shadows in the opening quarter of the contest and United had forced five corners and gone close when Donny van der Beek's shot was deflected over by Coleman inside the first 10 minutes.

Olsen's error almost gifted the opener to Cavani in the 12th minute but the Swede made amends a couple of minutes later by saving at the Uruguayan's feet and then foiling him twice with a double save in the 16th minute.

Everton didn't mount an attack worthy of the name until the 21st minute when Sigurdsson jinked his way past two players but saw his shot blocked by Harry Maguire. Back at the other end, Bruno Fernandes picked Mason Greenwood out with a cross but the striker's header brushed the far post.

Paul Pogba headed a corner straight at Olsen shortly before the half-hour mark and Dominic Calvert-Lewin did the same at the Park End giving Dean Henderson a routine save to make before Sigurdsson forced a better stop from the visiting keeper. Michael Keane's marauding run from deep forced a foul by Bailly just outside the box and Henderson had to push Sigurdsson's direct free-kick behind with both gloves.

Back at the Gwladys Street End Olsen's handling was examined by a dipping Fernandes free-kick as Everton made it to the halfway stage with the score somehow goalless.

Though United began the second period with more probing attacks and another close call when Cavani's shot deflected into the side-netting, albeit amid more than a suspicion of handball, the game eventually lapsed into something more akin to a war of attrition and it wasn't clear how or from whom a winner might come.

United were handed an advantage when Richarlison was barged cynically by Fernandes and pole-axed by Bailly and, mouth bloodied and glassy-eyed, it was determined he couldn't continue. The Brazilian was replaced by his compatriot Bernard and Davies replaced Gomes shortly afterwards and were it not for some sloppy distribution at crucial moments in the final third, the Blues might have sneaked a goal.

As it was, it was a slick passing move straight through their midfield that would prove to be Everton's undoing as Maguire found Martial with a ball from defence, the Frenchman then laid it on to Cavani who engineered space from 20 yards before rapping an unstoppable shot into the far corner. That the Uruguayan had escaped so much as a booking for choking Yerry Mina and throwing him to the ground earlier in the half made it all the more galling.

Ancelotti threw Cenk Tosun on in a desperate attempt to salvage something during five minutes added for stoppages but despite having a couple of set-piece opportunities in dangerous areas, they couldn't fashion an opening and after Fernandes had clipped the bar with one shot, the Blues were picked off on the counter again in the final few seconds where Martial easily beat Olsen to seal Everton's fate.