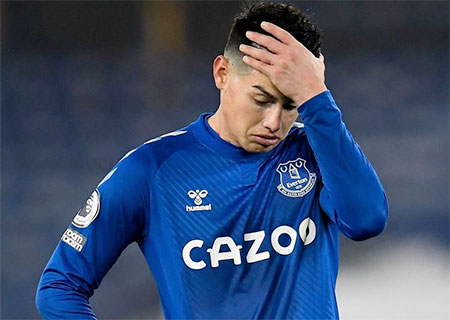 Everton once more made a mockery of talk that Champions League qualification might be an option for them in this unpredictable season, slumping to a dreadful home defeat to Newcastle United.

The Magpies came into the game without a win in 11 matches and with serious questions about Steve Bruce's future as manager but they left Goodison Park with three well-deserved points having done the double over the Toffees for the first time in two decades.

Callum Wilson scored both goals and might have had four as Everton flattered to deceive, generally struggled to impose themselves on their supposedly inferior opponents all game and hardly troubled Karl Darlow in the Newcastle goal.

Alex Iwobi returned to the starting XI wide on the right and Lucas Digne dropped back to left-back but neither player had effective afternoons, that despite the Frenchman being afforded plenty of space in the early stages.

Yerry Mina had an early headed chance from a James Rodriguez free-kick and Richarlison tested Darlow with a decent effort after 22 minutes but in the face of some overt physicality from Bruce's side, much of it aimed at James and unevenly addressed by referee Stuart Atwell, the home side generally lacked fluidity and imagination going forward.

Wilson's 12th-minute effort that deflected wide off Mina and Jonjo Shelvey's shot that also took a nick off a defender on its way past the post were warning signs for Everton but the most glaring was a free header afforded to Wilson on the half hour, one that Jordan Pickford had to acrobatically palm over the crossbar.

The Blues' best moment of the first half was a delightful back-heel by Dominic Calvert-Lewin into the path of Rodriguez but his prodded left-foot shot was beaten away by the goalkeeper while Richarlison blazed a chance well over in stoppage time.

Everton began the second period with a higher tempo and more purpose but it yielded precious little in the way of opportunities and soon dissipated. And it was Newcastle who should have taken the lead eight minutes after the restart when they counter-attacked and Ryan Fraser played Wilson in but the striker rolled his shot past the post.

Darlow did well to turn a Calvert-Lewin shot around the post at one end but with 17 minutes to go, the deadlock as broken. Once again, Wilson was allowed to rise unchecked to meet a corner and this time he guided his header across goal and into the far corner.

Carlo Ancelotti had already brought André Gomes on in place of Iwobi in an attempt to change the pattern of the game and Everton tried briefly to put pressure on the visitors but they failed to test Darlow further while Wilson hit the post for Newcastle when he might have put the game to bed three minutes from the end of the regulation 90.

The former Bournemouth man did get his second in injury time, however, as Everton poured forward in search of an equaliser and the Magpies caught them on the break as Jamal Lewis centred to Wilson and he had time to set himself and fire past Pickford to set the seal on a miserable afternoon for Ancelotti's side.