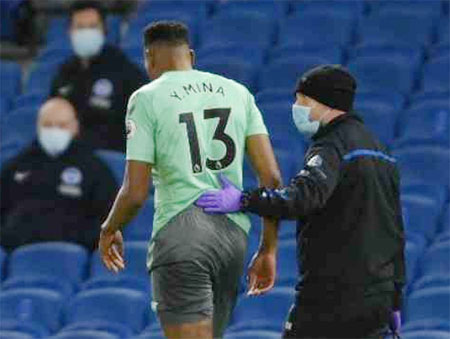 Depleted Everton meandered their way to another draw that does very little for their almost extinguished top-four dreams, playing out a tediously goalless encounter against Brighton.

Playing with a makeshift line-up due to injury to Dominic Calvert-Lewin and Allan, the Toffees fared well enough from a defensive point of view, even if Brighton carved out enough chances to have won the match handily, but Carlo Ancelotti's men were, once again, hugely disappointing at the other end.

An otherwise subdued James Rodriguez had the best chance for the visitors inside the regulation 90 minutes when he forced the only save of the match that Robin Sanchez had to make but substitute Alex Iwobi wasted a gilt-edged chance to win it in stoppage time when he blazed a clear chance over the bar.

With André Gomes ruled out through injury and Jean-Philippe Gbamin back on the treatment table, Ancelotti was forced to field Mason Holgate in defensive midfield alongside Tom Davies while Gylfi Sigurdsson was nominally deployed in a forward role to support Richarlison but to little practical effect.

Brighton had more of the ball throughout and started the brighter of the two sides but it was Everton who had the first sight of goal when Ben Godfrey lashed a wild shot over and Rodriguez had an opportunity with a direct free-kick but sailed his effort well off target.

Robin Olsen was the first of the two goalkeepers to be engaged when he fisted away Danny Welbeck's mis-hit half-volley before Jakub Moder's first-time effort flashed wide.

The Blues' best chance of the half came from an excellent pass down the right flank for Seamus Coleman but when he clipped a cross back for the arriving Davies, the midfielder planted a tame header wide of goal.

For the hosts, Neil Maupay popped up in front of goal to collect Leandro Trossard's centre but his shot deflected behind off Yerry Mina while Yves Bissouma's improvised over-head kick dropped onto the roof of Olsen's net.

While dull and uninspiring, Everton's first-half performance had at least set the stage for one of those games away from home where they were able to plunder a second-half goal and then protect the lead through to the final whistle.

Unfortunately, they lost one of the more likely options in that regard when they lost Mina to injury a little over 10 minutes after the restart. The Colombian appeared to strain a muscle stretching to hook the ball out of play by the touchline and his departure forced a reshuffle that saw Iwobi come on and Holgate drop into the left side of a central-defensive three beside Michael Keane and Godfrey.

Brighton had still been looking the more dangerous, having gone close through Maupay's shot which took a deflection and dribbled past the post and with 20 minutes left, Coleman did well to block Adam Lallana's shot from another Trossard cut-back.

For Everton, the one moment where James came alive in the box came a minute later, the former Real Madrid star collecting a pass from Coleman, jinking past the last defender and cutting a shot towards the near post that Sanchez had covered and batted the ball behind.

Brighton then seemed to temporarily find another gear as Welbeck was played into space but Godfrey accelerated back to make a saving tackle, Trossard saw an effort deflected behind for yet another Seagulls corner while Lewis Dunk prompted Olsen to palm his header over after the set-piece was lumped back into the Everton box.

Davies hammered a rising shot over when a cushioned pass through to Richarlison was the better option before he went off to be replaced by Nathan Broadhead but the one chance Ancelott's side needed fell to Iwobi as things opened up in front him but just when it called for the ball to be kept on target he, too, smashed over rather than work the goalkeeper and another chance to gain precious ground on the top four sputtered away.

Ultimately, this was another match that goal-shy Brighton will feel they should have won based on the pattern of play as Everton, desperately poor going forward for the most part, mustered just the one shot on target all night. The Champions League, already looking fanciful before this evening, is now a non-starter and Ancelotti is going to have to find a way to squeeze something out of this miserably unproductive team over the final eight games if European football of any description is to be a reality for them in 2021-22.