Coleman: 'Times like these make you so proud to be part of Everton' 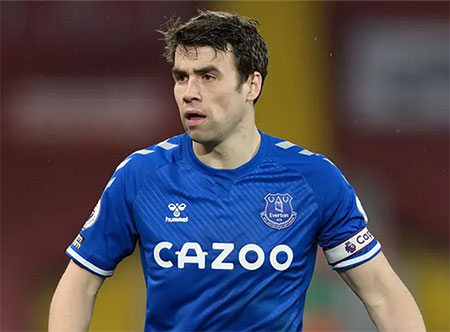 Seamus Coleman has expressed his pride at Everton's response to the announcement of breakaway Super League by six rebel Premier League clubs and a half dozen other co-conspirators in Spain and Italy.

The ill-considered and amateurish launch of a 12-team, virtually closed shop league by the likes of Liverpool, the two Manchester clubs, the North London duo and Chelsea rocked the football world on Sunday evening and triggered a stunningly unified and ultimately effective reaction, particularly in England.

By last night, the venture had collapsed when the six protagonists from the Premier League withdrew but not before Everton had led the way with an impressive statement ahead of a meeting with the Premier League chief executive Richard Masters and the 14 “left-behinds” of England's top flight.

Not surprisingly, Coleman voiced his dismay at the Super League farce but also commended his club.

“It's been a very interesting week,” he told the Liverpool Echo. “I think we've seen the good and the bad of football.

“The football world united to let everyone know what we thought of the proposals. I think the feelings were unanimous amongst players, managers and fans so we got to the right conclusion in the end.

“When I saw the statement from my own football club condemning the plans, how strong they were and how they spoke from the heart, it gave me massive pride to be part of this football club. We are known as The People's Club and that showed.

“Times like this make you so proud to be part of Everton because we are about the fans — and we always have been. We all understand football is a business but that's only to a certain degree.

“For me, Everton means everything to me. It's a club that took a chance on me all those years ago and ever since then I've tried to repay them. It's a family club and ever so close to my heart.”

As for the other. Its all okay now, cuz they apologised.

You would be made up if your daughter brought this lad into the family.

Dale Self
3 Posted 21/04/2021 at 19:51:00
Yes, yes, those are good words Seamus! The response of the club, players and supporters makes clear that those who love football itself will prevail. The others can do one.
Christy Ring
4 Posted 21/04/2021 at 20:49:34
A brilliant person, Captain and Evertonian, and I agree with Thomas @2 would be a huge asset to the coaching staff.
Phil Parker
5 Posted 21/04/2021 at 22:36:51
Some of my favourite moments as an Evertonian were Seamus, last seconds versus Leicester in his comeback game from his horrendous injury, running with the ball down the Paddock side towards the Gwladys Street, being roared on by an emotional Goodison crowd. We love you and always will Seamus. You are a special Evertonian.
Frank Wade
6 Posted 21/04/2021 at 23:55:10
So Proud of the stance that the Everton board took and the statement they made but equally proud to have a man like Seamus at the club. What a pity he is coming to the end of his career, still 'playing football the Everton way'.
Would love to see Everton play Sligo in Sligo in a preview to his testimonial. What a night that would be ?
Bob Parrington
7 Posted 22/04/2021 at 00:24:07
Good on ya Seamus.
Mike Gaynes
8 Posted 22/04/2021 at 01:31:44
We've never had a more worthy captain.
Darren Hind
9 Posted 22/04/2021 at 04:20:38
Even Carlo says he is up there with any of his former captains.

Neil Lawson
10 Posted 22/04/2021 at 10:42:32
If we had 9 more Seamus's on the field (can't expect him to play in goal), we would have been invited to join the ESL.
David Connor
11 Posted 22/04/2021 at 13:15:43
One of the very few players of recent seasons who I believe genuinely loves the club. How many can you say that about? Jags and Baines spring to mind. Going back a bit further, Big Dunc and Tim Howard. I wish we could have them play for us now at their peak. Too many players now (and not just at our club) are simply there for the money... pure and simple. They have little affection for their clubs. As with most owners, their love for the fans and club is minimal.
Ajay Gopal
12 Posted 22/04/2021 at 15:22:25
David (11), I was thinking of exactly those 3 players - Coleman, Jagielka and Baines! It is such a shame that they never won silverware with Everton. Can the rest of the players give a big push next season so that Coleman goes out with a trophy?
Paul A Smith
13 Posted 22/04/2021 at 17:43:45
Times like these make me realise we have put up with this shit forever.

The rats across the park have cost us legacy twice and we lay down for them.

I do love Coleman, though; he is a true Eveton fighter.

Remember sixty grand. Remember comments like this. Remember the leg snap and recovery. Remember the way he's conducted himself every single minute while wearing the uniform.

And don't bitch. This man should be with Everton as long as his two legs work and he wants to be here. If he doesn't retire a Blue, it's a crime.