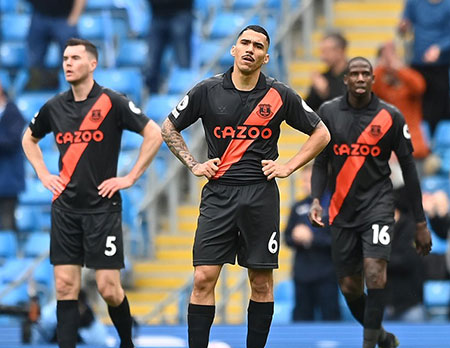 Everton's dramatic descent from the heady heights of second place on Boxing Day culminated in a comprehensive thrashing by the Champions at the Etihad Stadium that condemned the Blues to a desperately disappointing 10th-place finish.

Awful defending from Carlo Ancelotti's men in the first quarter of an hour meant that the contest was effectively over before it had really got going as Kevin de Bruyne and Gabriel Jesus struck to get Manchester City's title celebrations into full swing.

Phil Foden added a third early in the second half before Sergio Agüero stepped off the bench for what was almost certainly his Premier League swan song to grab a brace that inflicted on Everton their heaviest defeat of the campaign.

The Toffees hadn't lost by more than two goals all season, a hallmark of the defensive solidity on which Ancelotti has concentrated, particularly away from home. The Italian's back line was torn apart by City, however, on an afternoon that cruelly illustrated the yawning chasm between the two clubs in almost all departments.

While Seamus Coleman was deemed fit enough to make the substitutes' bench, Yerry Mina was a surprise absentee from a defence that lined up with Mason Holgate, Ben Godfrey, Michael Keane and Lucas Digne.

Tom Davies returned in midfield alongside Allan and Abdoulaye Doucouré, with Gylfi Sigurdsson the nominal source of creativity behind Richarlison and Dominic Calvert-Lewin in what was another defensive posture from Everton.

And yet the visitors had some bright moments in the early exchanges and Calvert-Lewin forced the first save of the game from Ederson when he was put in the clear by Sigurdsson but his shot from the angle was foiled by the Brazilian.

Jordan Pickford made a similar stop at the other end to deny Gabriel Jesus but the floodgates opened in the 11th minute when De Bruyne's run into an ocean of space in front of Everton's defence went untracked and he had the time to pick his spot with a typically excellent finish inside the far post.

Three minutes later, Keane was caught trying to dribble through a clutch of City players near the halfway line and the hosts pounced, with De Bruyne picking out Jesus who easily turned Holgate and fired home to make it 2-0.

A potential route back into the game for the Toffees arrived 10 minutes before the break, though, in a moment of controversy where Everton felt that Ruben Dias should have been sent off for denying Richarlison a goalscoring opportunity.

The Brazilian raced onto a through-ball and was caught by the Portuguese defender's slide-tackle and then clattered by Ederson, with referee Michael Oliver electing to only yellow-card Dias.

Gylfi Sigurdsson stepped up to take the penalty but placed his shot at the idea height for the goalkeeper and Ederson pushed it away while Richarlison's shot from the rebound was charged down by a recovering defender.

Another claim for a spot-kick, this time for a possible foul on Calvert-Lewin, was waved away before Riyad Mahrez rattled Pickford's crossbar from 25 yards out as City finished the first half on top.

Sigurdsson's wayward shot from distance a few minutes into the second half largely summed up Everton's diminishing attacking impetus and Foden made it 3-0 eight minutes after half-time with another impressive finish. Doucouré's loose pass was cut out on in the centre-circle and City attacked quickly with Jesus finding Raheem Sterling who then passed for Foden to sidestep Holgate in the box and tuck home his shot.

Ancelotti sent on Alex Iwobi for Doucouré and then Bernard for Sigurdsson but neither player made much impact. Instead it became the Agüero send-off party as Davies became the latest player to be dispossessed cheaply in his own half and Agüero navigated his way around Holgate before guiding the ball into the far corner with the outside of his boot with 20 minutes left.

Six minutes after that, Everton's misery was complete. Fernandinho crossed from the right for Agüero who had positioned himself inside the 10 yards of space between Godfrey and Keane and the Argentine steered a header beyond Pickford's reach to make it five.

Pickford denied the striker a hat-trick with strong hands to push away his fierce shot from the angle and then turned aside a header from a corner before saving well once more from Sterling in stoppage time.

The heavy defeat dropped Everton to their lowest position of the season, behind “crisis club” Arsenal and newly-promoted Leeds, a drop of two places that will cost the club at least £5m in merit payments from the Premier League.

More worrying is the alarming drop-off in the team's performances since the turn of the year and the manager's inability to reverse the decline, especially at home. It leaves Evertonians looking anxiously ahead to yet another summer of potential transfer business but on this evidence it looks to be a Herculean task to get this squad competing in the top six next season.