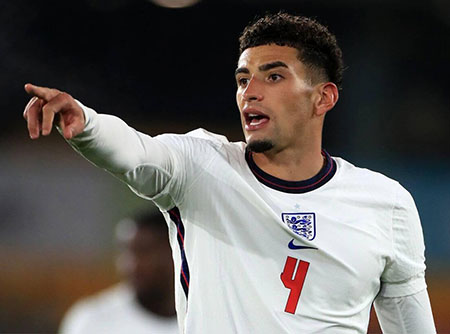 England played Austria tonight in a warm-up for the upcoming European Championships and it afforded Gareth Southgate the opportunity to hand Ben Godfrey his first England cap.

The Everton defender came on with half an hour to go to replace Tyrone Mings and was swiftly followed onto the pitch by his club-mate, Dominic Calvert-Lewin. Jordan Pickford, the Blues' other representative, had started the friendly.

Godfrey has already been informed by Southgate that he won't be among the final squad of 26 that will participate in Euro 2020 for England but used the occasion to get his first taste of senior international action.

Calvert-Lewin has just come on as well. Come on DCL!

Andy Finigan
8 Posted 02/06/2021 at 23:26:26
Here here Jack and I think although he is a bit raw if England had a norther pacey back as well then they could play a higher back line and have more possesion in midfield but becuase we haven't Southgate is now looking at at back 5 or sitting deeper with a back 4.i wish he had picked Godfrey coss I think his attitude is infectious. And I love him.
Colin Glassar
9 Posted 02/06/2021 at 23:30:08
Ben looked nervous and almost scored an oggie with his first touch of the ball.
Pickers looked safe until the last 10 minutes when his bipolar took over.
DCL made no impression whatsoever.
John Atkins
10 Posted 02/06/2021 at 23:40:23
Why bother with England - as bad as watching us. The fact that we had 3 players on display is an indication

Rob shame on you for being happy about a player getting injured, you’ve obviously never played the game, probably picked last or went in goal

Kim Vivian
11 Posted 03/06/2021 at 08:54:25
England ---- football ---- Yaaawwn
Charles Brewer
12 Posted 03/06/2021 at 10:18:48
A pretty dreadful match. Poor Ben Godfrey should certainly be buying Jordan Pickford a pint for saving his "Everton, that" "don't bother to look first" passback and I think DCL was booked for jumping incredibly (and I mean that in its original sense, not the modern sense of something bang average) high such that one of the remarkably dirty Austrian team ran into his feet.

Alexander-Arnold's game improved after he went off, he was terrible.

Wanna come round and see my medal collection!!

Do you wanna sign TAA's get well card by the way? 😉

Justin Doone
18 Posted 03/06/2021 at 23:23:04
Really pleased for Godfrey after a good season but he still has a lot to learn. I'm not sure a first international cap is warrented but I hope it helps him develop and understand how much he still needs to work on.

Let's start with stopping the passing backwards and look to take a touch and move the ball forward quickly. It was a very Everton moment, get ball, take time deciding what to do with ball, play an awful back pass and encourage the opposition to move forward and press after an error.

I can try and understand Dom giving a few kick away for jumping so high he endangers another player, high foot to face, but it should not be a yellow card. The defender didn't make an effort and turned away. I thought he did OK but at the end a 'real out and out striker' would take the shot. Not dribble backwards and try and pass to a team mate. Again, learn to go forward, be positive and shoot. Stop passing backwards!

England do remind me of Everton, own fans over rate their chances believing their better than they are. Some good players but defensively suspect and hit and miss going forwards.