Mina on target for Colombia in World Cup qualifying 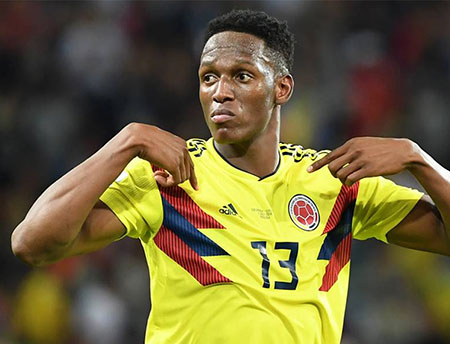 Yerry Mina scored his first international goal since the 2018 World Cup to set Colombia on their way to an important 3-0 win over Peru in the CONMEBOL region tonight.

The Everton defender headed home from a set-piece in the 40th minute before Peru's problems mounted when Miguel Trauco was sent off for a second bookable offence on the stroke of half-time.

Mateus Uribe doubled Los Cafeteros' lead four minutes into the second half when he headed home John Medina's cross and Luis Díaz increased the visitors' advantage to 3-0 six minutes after that.

An action-packed encounter took another turn just short of the hour mark when Daniel Muñoz had a yellow card upgraded to a straight red following a check by the Video Assistant Referee which levelled things up at 10-a-side.

Peru pressed in the final half hour but couldn't make the breakthrough, ensuring that Colombia boosted their goal difference from -5 to -2.

Colombia, who are without James Rodriguez who was omitted from the squad until after the Copa America at the earliest, came into the evening lying eighth in the CONMEBOL region qualifying table with just one win and four points from their first four games and badly needed a victory to boost their hopes of making it to next year's finals in Qatar.

The victory lifts them up two places to sixth, behind Uruguay on goal difference ahead of a date with Argentina on Tuesday back in Colombia.


David Pearl
1 Posted 04/06/2021 at 08:42:10
Good for him for scoring a goooooaal goal goal goal gooooaaal. Now l hope to see him doing that for us next season. Hard to say how our players are currently feeling but l wouldn't be happy. Big summer coming up both in recruitment and squad moral.
Mark Ryan
2 Posted 04/06/2021 at 09:12:52
I'll have whatever he's drinking I want to hear Carragher or Neville let out one of these goooooaaalllll chants when Mina rises to score at Mordor next season
Tony Everan
3 Posted 04/06/2021 at 10:22:53
Well done to Yerry! It feels like a tonic to hear it with everything’s else that’s going on.
Mark Ryan
4 Posted 04/06/2021 at 12:40:40
Agreed Tony, simple football and not manager angst.
Bill Rodgers
5 Posted 04/06/2021 at 13:27:05
This could be an important week of progress for EFC. We were fortunate to offload a manager who was costing shedloads but was only here for the money. He looks likely to raid us for at least one player who doesn't want to be here. Good. Then we may also gain a board and owner who finally realise that commitment is vital and money-grabbing is the opposite. Let's now hope that there is a massive clear-out at Finch Farm and we say goodbye to nostalgic dinosaurs who have obviously failed to produce motivated players for years. Then let's hope that the owner and his genius advisers manage to construct a managerial contract that motivates performance rather than simply rewarding the reputation. How about a decent basic salary which quadruples for a top 6 finish ?
Pat Kelly
6 Posted 04/06/2021 at 15:12:12
What's an action packed encounter ?
Jack Convery
7 Posted 04/06/2021 at 20:52:23
An employee of EFC actually doing their job !!!!!!!!!!!!!!
Mike Gaynes
8 Posted 04/06/2021 at 23:01:02
Well in Big Yerry!

Save about four of those for us next term.