Everton duo feature as England begin Euro 2020 with a win 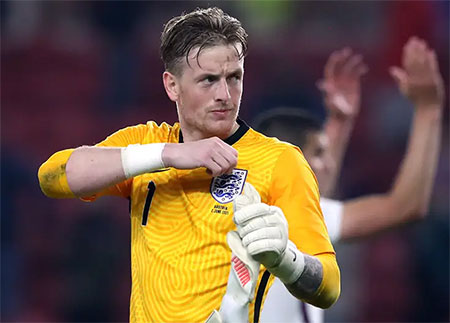 Jordan Pickford was in goal and Dominic Calvert-Lewin made a brief entrance as a late substitute as England edged Croatia in their Group D opener at Wembley.

Raheem Sterling scored the only goal of the game, latching onto Kalvin Phillips's smart pass to sweep the ball past Dominik Livaković in the 57th minute.

Croatia introduced ex-Everton midfielder Nikola Vlašić with 20 minutes to go as they chased the game while Gareth Southgate turned to teenager Jude Bellingham for this first attacking change rather than Calvert-Lewin.

However, the Blues' striker did eventually make his European Championships bow when he replaced Harry Kane in the first minute of stoppage time.

Having won a group opener in the competition for the first time in their history, England face Scotland in their next game on Friday.


Danny Broderick
1 Posted 13/06/2021 at 17:47:52
I’ve been very critical of Jordan in the past, but I’ve always believed his failings were psychological, not technical. He clearly has all the tools to be a very good keeper. But he needed to get his head right, to avoid rushes of blood to the head and to keep his concentration, avoid silly mistakes.

He has admitted to seeing someone to help him with the mental side of his game, and he now appears much calmer. He ended the season really well, and he did well for England today. He’s been looking like a proper keeper again for the last 2/3 months, well done to him.

Alan Johnson
2 Posted 13/06/2021 at 18:15:05
Spot on Danny. He seems to have buried his demons.
David Pearl
3 Posted 13/06/2021 at 19:10:02
Yep, probably the best shot stopper in the league. I'm sure he still has a couple mistakes in him but all keepers do.
David Hayes
4 Posted 13/06/2021 at 19:33:59
What was the point of bringing DCL on for the totally ineffective Kane after 91 mins? From DCL sitting on the bench watching Kane doing nothing for 91 mins to be brought on as a timewasting pointless substitute, shows Southgates lack of confidence in DCL and his ability to do an effective job for the team. Get ready for splinters in the arse Dominic you are 4th in line in Southgates plans.
Damien Coleman
5 Posted 13/06/2021 at 20:26:39
Always good to see Everton players play in international tournaments, especially for England. I personally think DCL will have a big part to play later in the tournament; Kane looked slow and leggy today, and if England have already qualified I can see DCL starting the third group game. If not, he’ll certainly have a part to play in the knockout stages as defences tire and extra time looms.

I’m backing him to have a ‘Pickford v Colombia’ moment and be the match winner somewhere down the line. That will hopefully boost Everton’s profile a bit to attract players this summer, or at the very least add a few million to his value.

On the occasions the England defence did put him into situations, he was alert, proactive and commanding of his box.

Although he won't get the plaudits, one of England's best performers today.

Si Cooper
7 Posted 14/06/2021 at 01:35:05
Raheem Sterling is the current David Platt. A crucial goal wipes away a generally mixed performance and suddenly you had an outstanding game. Helps when commentators/ pundits credit you with bits of play you haven’t done. After an occasion where the receiving man had cleverly dummied putting a foot on it and allowed the balls momentum to beat the defender for them, up pipes Jermaine Jenas to commend Sterling for having done it a couple of times in the match before then when he’d done no such thing.
Calvin Phillips clear MotM, most alright, Croatia generally well contained to the point that even Kyle Walker passing the ball to no one three times when not even under pressure didn’t really cause any problems.
Kieran Kinsella
8 Posted 14/06/2021 at 01:43:16
Si

Fair point. I had Phillips as MOTM even with having stepped outside and missed his assist for the goal. Old Platt. Never really got found out until he went to Arsenal. Not prolific enough to be a striker, not all around talented enough to be a midfielder. Kind of like Tim Cahill without the heart.

Yeah I was thinking about Stones but the same applies to Pickford: comfortable. Neither one was greatly tested but they did what they needed to do with ease. I guess for the manager that’s ideal, your center halves and goalie aren’t forced to do the spectacular because everyone else did their job so well. Of course The Mirror had to turn a positive into a negative with a David James article praising Pickford in the context that he has matured SINCE he maimed VVD.

One tactical observation I made was how he very much sat back in defence compared to the way he plays for City.

Manager tactics, but interesting to see the difference.

Tony Abrahams
11 Posted 14/06/2021 at 07:42:14
I think it’s the middle of the defence that might eventually be England’s undoing, but I hope I’m wrong. Stones is a fantastic footballer, so I understand why he’s sitting deep, but I prefer the defender with the fastest recovery sitting the deepest, and although I also like Mings, I’m just not sure if these two are going to compliment each other, against the better teams?
Kev Jones
12 Posted 14/06/2021 at 13:34:06
I thought that was the best England performance for a while. Patchy but some great stuff particularly first half. Croatia subdued and disappointing. Could not understand Kane dropping back all the time and getting no service in the centre. Puzzled that Calvert-Lewin put on and again no service.

Graham Mockford
13 Posted 14/06/2021 at 17:50:39
I’ve said on a number of occasions Philips is the best player I saw against us last season. In the Goodison game he gave a complete midfield performance. Oh to have a player of that quality in a blue shirt.
Andrew Ellams
14 Posted 14/06/2021 at 17:53:28
I've been a fan of Kalvin Phillips for a while now but yesterday was the closest I've seen to a complete midfield performance from him.

I think he might be out of our reach now.

There is certainly no chance of him now leaving his boyhood club for a lower placed team - especially since he's now a starter for England. If he leaves Leeds it'll be for City, Chelsea, the RS or (much less likely given the rivalry) Man Utd. The most likely thing is that he stays put at the core of a well run club.

You are being ironic right?