A tremendous win on the road underlines Everton's improving form 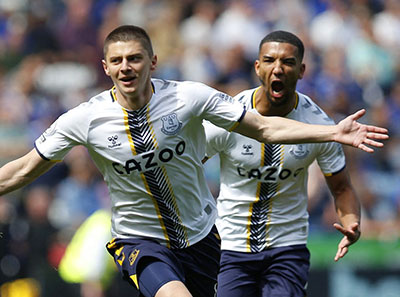 Vitalii Mykolenko's first Premier League goal was a peach, a wonderful left-foot volley that put Everton ahead after just 5 minutes

The travelling Blues fans helped Everton to secure only their second win on the road this season as Frank Lampard's gameplans are finally having the desired effect.

Everton took to the field unchanged from last week's victory over Chelsea last weekend and got things going at the King Power Stadium, with 3,339 Everton fans making plenty of noise.

Iheanacho was allowed to run through the Everton defence and play in Daka but Pickford was out like greased lightning to smother his shot at the expense of a corner that was cleared.

Iheanacho then got behind the Everton defence and forced another good save from Pickford before the flag finally went up for offside.

Good Everton pressure forced a couple of throw-ins and Iwobi crossed nicely from the second for Vitalliy Mykolenko to volley it beautifully past Schmeichel into the far corner for a fantastic start, his first goal for Everton.

Another Foxes ball in from Dewsbury-Hall could have easily been diverted past Pickford but he gathered the ball confidently. Doucoure broke out from the back and played a good pass to Gray who crossed in back to him and Doucoure's first-time shot seemed to beat Schmeichel somehow but then bobbled on the line and off the post for him to grasp.

However, on the clearance, a nothing ball fooled Mina and Coleman, who together conspired to mess up completely by both trying to head the high bouncing ball, letting Daka in behind to score a soft stupid giveaway goal that rather spoiled things.

Amartey was then granted acres of space to have a crack, which he did, inches over Pickford's bar. Mina had some problem that saw the game halted and Keane switched on after just 17 minutes.

15 minutes of uneventful midfield stalemate followed until Gordon forced a corner off Fofana. Gray's ball in was good, Richarlison heading it goalwards; that was parried into the ground by Schmeichel and bounced up nicely for Holgate to head into the net.

Everton had to be alert in their defending, Keane making a number of key interceptions, but Ihenacho nevertheless getting a shot off that was easy for Pickford to stop.

More confusion in the Everton defence between Keane and Holgate almost let in Dewsbury-Hall but his shot screwed wide of the post. Gordon had a good chance to release Iwobi for a run down the wing but his pass was poor and easily intercepted.

Everton continued to resist the home side's attempts to break through, assisted by every one of those Blues fans present, singing non-stop Spirit of the Blues as a continuous accompaniment, forcing some home boos in response at the break.

Play resumed with The Foxes pushing hard for another equalizer while Everton looked to tighten their defence to hold firm against the persistent attacks. Richarlison got free but Evans stod on his foot, causing intense pain and anguish that the Brazilian would soon recover from.

In defence, Iwobi was remarkable in his determination, while Everton continued to fashion some attacks, Gordon breaking right but taking too long to shoot and seeing his effort blocked.

Everton had a good spell of possession but Gordon was playing far too deep and eventually Gray wasted the build-up, wellying a shot over the bar.

Another very mature spell of midfield possession ended with Gordon's poor attempt at a return ball that was very easily intercepted. He tried another clever pass that was also intercepted as the Blues otherwise denied The Foxes any real chances until Mendy launched an excellent strike that Pickford watched all the way and tipped around the post.

Gray did well until taken out by Castagne as Vardy replaced Mendy. From the free-kick, Holgate sent a looping header over the bar.

Leicester should have scored but for a brilliant save by Pickford to deny a very good strike from Barnes after a great cross from Ihenacho was headed back in by Daka. From the second corner, Vardy lashed one well off target across goal.

Barnes worked space for himself and struck another fine shot that Pickford pushed expertly away from his goal.

Everton appeared to have created a great chance when Gordon overlapped on the right but Richarlison could not convert the low cutback. Allan replaced Gray as Evans fouled Gordon again.

Gordon's free-kick was all-too-easily defended away. The kid is still not producing very much by way of end-product. At the other end, Everton kept their shape and discipline well to deny the home side any clear chances. Ademola Lookman replaced the lively Daka from Dakar.

Inheacho resorted to a long strike that was an easy take of Pickford. Barnes then had a free header he placed just wide of the Everton goal. Gordon worked his way forward and crossed toward Rondon, but the ball was not high enough to avoid an intervening defender.

The Blues fans kept up their tremendous singing all the way through the second half, and it resounded around the King Power Stadium as they sensed a tremendous win approaching on the road.

Richarlison relieved the pressure, drawing a silly foul and a yellow card for Amartey as the not-so-faithful Leicester fans left in droves to another fantastic rendition of Spirit of the Blues.

Into added time and Gordon was fouled by Tielemans. At the other end, a Vardy header was gathered well by Pickford, with the seconds ticking away to a massively celebrated final whistle from Craig Pawson.


Paul Kossoff
1 Posted 10/05/2022 at 23:41:53
Tremendous hard fought win for us, let's hope we repeat it against Watford. I can see Leeds winning at weekend but Burnley have a hard task getting anything against Spurs. Coyb.