No repeat heroics from Mina as Colombia exit on penalties 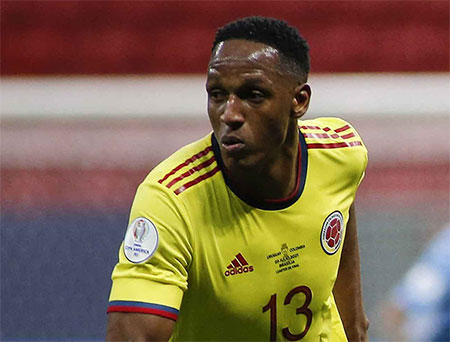 Yerry Mina was foiled from the penalty spot by Emiliano Martinez as Colombia were beaten by Argentina in a shootout that decided the second of the semi-finals of the Copa America, one of the games of the tournament.

The Everton defender had scored an emphatic spot-kick against Uruguay in the quarter-finals three days ago but he went the same way again this time and Martinez was equal to it.

That gave Argentina the edge on penalties when Leandro Paredes netted to make it 2-1 and when Martinez dived to save Edwin Cardona's crucial kick at 3-2, the Albicilesti booked their place in the final, which will pit Neymar of Brazil against Lionel Messi.

The match itself was a rip-roaring, end-to-end affair, particularly in a mad-cap second half that saw the fouls and yellow cards mount up while the woodwork was rattled three times and Argentina somehow failed to score with the goalkeeper AWOL.

Argentina led at half-time thanks to Lautaro Martínez's seventh-minute opener that was created by Messi's footwork that enabled him to shrug off Mina and lay up his team-mate for a simple finish.

Mina hit the crossbar with a thumping header and Cardona saw a deflected effort bounce off the base of the post but Colombia caught their opponents cold with a deep free-kick that sent Luis Diaz away and he held off his marker to toe a shot past Martinez and inside the far post.

Martinez somehow fired into Davidson Sanchez on the line after Angel Di Maria had rounded David Ospina who was yards outside his box and Messi later hammered an effort off the post as neither team proved able to find a winner in 90 minutes so it went to penalties.

Our big guy actually did a nice job of stopping Messi's run for goal, but he couldn't stop him from passing off to Martinez for the score.

Yerry Mina is playing well. Passing out nicely from the back plus he rattled the crossbar with a header from a corner and he also rattled Messi. Let's hope that Colombia can equalize and make for an exciting finish.

Same technique and direction as the quarterfinals, and the keeper obviously had him scouted.

Do yourself a big, big favor and find a replay of Columbia v Argentina and watch it.

The beautiful game on display

Happy for my man Messi. Chance to win a national team trophy.

Jamie's right, this game was more fun than a frog in a glass of milk (to quote Bob Weir).

Pity that Yerry missed his penalty kick, he had played well. I was most impressed by Juan Cuadrado. I would take him as our new right-wingback.

Lyndon Lloyd
9 Posted 07/07/2021 at 05:32:46
Ed, that is how your pronounce it in Colombia/Spanish, apparently. I know, we've been living a lie. If you watch the Colombia commentary on YouTube of the World Cup semi-final against England you can hear them pronounce it with a soft "J" sound... that's after they've yelled "Goooooooooool" for 2 minutes straight!

But what a brilliantly manic game that was tonight. I hope the final is as good. Let's just say the application of the rules of the game is very different in South America than it is in the Premier League!

In the Paisa region of Medellin (or 'Medejin') they pronounce the double-l and y sounds as a soft j. They do the same in Argentina. But the rest of Colombia doesn't to my knowledge.

Yerry is from Guachene in the east of the country, so I've no idea how Mrs Mina would have called him in for his tea.

Mina strokes the ball to Martinez’s left and he saves it.

All mind games, but isn’t it ungentlemanly conduct, especially as Martinez is even talking to Mina as he strokes his penalty. All good fun anyway.

Shite penner from a nervous and somewhat naive Mina who should have the experience. I get he was nervous but don't rise to a gobshite of a goalie.

I can't see Jordan Pickford doing that against the Danes, can you?

"Why aye man, the balls not on the spot, you've nee chance of beat'n us" or something like that… ha ha!

When we beat Man Utd in the Cup semi-final was like winning the trophy. Shame when we scored early in the FA Cup Final, Moyes reverted to his usual predictable tactics.