Calvert-Lewin set for extended spell on the sidelines 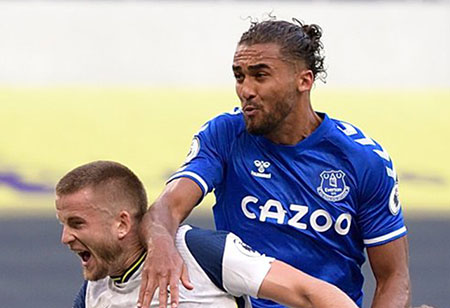 Everton could be without Dominic Calvert-Lewin until after the next international break as he continues to struggle with a thigh injury and his broken toe.

The striker was withdrawn from the England squad for the most recent round of World Cup qualifiers but, having trained at Finch Farm this week, he was expected to be in the line-up to face Burnley this evening.

However, Calvert-Lewin's name was missing from the matchday squad and manager, Rafael Benitez, explained that it was both injuries that were keeping him out and that he may be sidelined for as long as three weeks, suggesting that he might miss as many as the next five matches.

"He has broken his toe,” Benitez said before tonight's game. “He was training with problems and playing with pain. He had an injury the other day to his quadriceps and we have to wait two-to-three weeks, maybe more."

Looking forward to his continued improvements and wish him a full recovery.

Where is Ellis Sims by the way?

And what about the kid that scored a tonne of goals pre season?

Are they fit/good enough to be on the bench alongside Rondon?

Robert Leigh
4 Posted 14/09/2021 at 08:53:19
Rondon looked off the pace yesterday, hopefully he is back to full fitness soon as he'll be needed through October by the sound of it.

We did look good as a fluid system yesterday, Gray and Richarlison pulling a (usually) very disciplined back four all over the place in the second half. Having those two up top with Townsend or Iwobi buzzing around them would be sufficient for most matches while Rondon gets up to speed.

Failing that, James in a false nine would be interesting. Means he doesn't have to do the hard yards, and will have runners going beyond him.

Mike Keating
5 Posted 14/09/2021 at 10:48:25
Robert @4 I thought Rondon looked too slow - reminded me of Stracqualursi. Mind you if he scores the winner against Chelsea this season, he’ll become a legend. Agree your comments about James but not sure Rafa shares them.
Robert Tressell
6 Posted 14/09/2021 at 11:07:09
Rondon hasn't played much football of late, I think, so may need some time to get up to speed.

Means Richarlison ploughing a lone furrow for the time being, but hopefully in a 4321 / 433 so he's not so isolated. He doesn't do what DCL does as a lone striker - but he can be effective as a lone striker with a different set up.

Otherwise transfermarkt makes no reference to Simms being injured and reckons Tosun could return in October. Bit dubious on both counts.

I watched the U23s game against Derby on YouTube on Friday night and the lads on commentary said that Ellis Simms was expected the be fit very shortly. Apparently he injured himself while practicing penalties before Blackpool's playoff game at Wembley and has been unavailable since.

The other lad you referred to I presume is Lewis Dobbin. He played on Friday before being substituted late on. He looked good at times showed some nice touches and made some clever runs but I think he's still only 18 and don't think he's ready for competitive first-team football yet. Putting him in now might do the lad more harm than good.

Just my opinion; others may think differently.