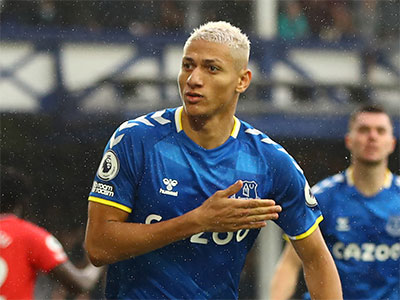 2-1 and up heading for victory over Watford, Everton went into stunning meltdown in the space of 13 second-half minutes and ended up being humiliated 5-2.

The Hornets won at Goodison Park for the first time in their history as Claudio Ranieri claimed his first victory as their manager, aided by shocking defending and the predatory instincts of Josh King, a player who failed to either start a game or score for the Toffees in the back half of last season before being let go.

In the eyes of shell-shocked supporters, the story of this horrendous reverse pivoted, perhaps, on manager Rafael Benitez's substitutions which saw Anthony Gordon, arguably Everton's best performer on the day to that point, withdrawn in favour of Richarlison while Salomon Rondon remained on the pitch.

The Venezuelan had been a visibly weak link in last Sunday's defeat to West Ham and offered next to nothing on this occasion as well but he would see the contest out until the final whistle while Demarai Gray was later replaced by Alex Iwobi with the score at 2-1.

While there seemed to be no case for keeping Rondon on, this ugly loss and the scale of it was more about calamitous defending than it was the lack of cutting edge up front. Coming into the day, half of the goals Everton had conceded this season had come from set-pieces and they demonstrated their weaknesses there once more as King plundered a first-half equaliser off a corner and Juraj Kucka powered home his first Watford goal from another dead-ball delivery to make it 2-2 in the 78th minute.

Benitez's defence then collapsed as they were caught completely cold and badly short-handed on the counter-attack and King swept the ball past Jordan Pickford to make it 3-2 with 10 minutes left, completed his hat-trick seven minutes after that and Emmanuel Dennis rounded off the scoring in stoppage time.

With Dominic Calvert-Lewin and Abdoulaye Doucouré sidelined for what looks likely to be weeks and Yerry Mina ruled out prior to the game, Everton would have been expecting a difficult assignment against the recently-promoted Hornets but they got off to the perfect start.

Flying down the left flank, Gordon fed Gray and when he crossed low into the six-yard box, Tom Davies arrived to slide home from close range to score his first goal in over two years in only the third minute.

Seven minutes later, Gordon was involved again, playing a smart one-two pass with Davies before playing in Andros Townsend whose snapshot was parried away by Ben Foster and Gordon could only head wide the resulting cross from Seamus Coleman.

The Toffees' good work was undone, however, by another failure to deal with a set-piece. A free-kick was whipped in from the right near the corner flag, the ball came off Ben Godfrey's head and dropped to King who was free to prod it into the gaping net. Though the goal was initially ruled out for offside, a check by Video Assistant Referee, Martin Atkinson, revealed that Gray's trailing foot had played King on.

Moussa Sissoko tried to punish a poor defensive header from Godfrey but smashed a 25-yard effort wide and Allan had a shot deflected behind at the other end before strong claims for an Everton penalty for a suspected foul on Gordon were waved away by referee, Graham Scott.

Just before the interval, Gray's cross ended at the feet of Gordon in front of goal but his shot was blocked while back at the Gwladys Street end, Kucka hammered a promising opportunity over the crossbar after Michael Keane had given the ball away cheaply.

If Everton needed further warning that Ranieri's side could be dangerous without alert defending, it came in the 58th minute when Ismaila Sarr got around Lucas Digne too easily and centred to King unmarked in the middle but he was foiled superbly by Pickford at point-blank range.

What should have been the turning point of the contest came shortly afterwards when Richarlison, absent for the past few games with a knee injury, came off the bench to score within three minutes of his introduction for the tiring Gordon. The Brazilian ghosted into space to connect with Keane's clipped ball into the box and launched himself to guide a header past Foster and send Goodison into rapture.

With 16 minutes left, Keane could have killed the contest but, crucially as it turned out, planted his header off a free-kick the wrong side of the post and just four minutes later, Watford were level again after Gray had been replaced by Alex Iwobi.

Sloppy play by Davies forced Keane to put the ball behind and the resulting delivery found Kucka who bulleted a header past Pickford.

King's second goal turned the game on its head at 3-2, Pickford kept it close after Allan's error was almost punished by Dennis and Kucka headed another good chance over while Digne wasted a good opportunity at the other end when he lashed a wild effort high into the stands off Richarlison's cross.

Any chance of Benitez's charges getting anything from the contest evaporated three minutes from the end of the regulation 90. Godfrey failed to clear his lines as three Everton defenders got in each other's way and the ball was poked through to King who side-stepped Keane and slotted past the keeper to make it 4-2.

And Everton's misery was complete in added time as Emmanuel took advantage of an AWOL defence to stroke home Watford's fifth in front of rapidly emptying seats.