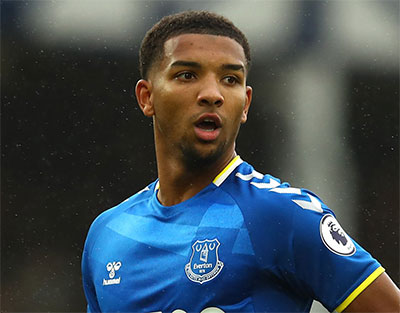 Everton produced the fire but didn't quite have the quality to break down an obdurate Spurs defence as it ended honours even following a fractious but goalless affair at Goodison Park.

The Blues thought they had a 63rd-minute penalty when Richarlison appeared to be tripped by Hugo Lloris but referee Chris Kavanagh reversed his decision to award a spot-kick before Demarai Gray narrowly missed the best chance of the game with eight minutes to go.

In the end, Tottenham came closest to grabbing the points before Mason Holgate was sent off in stoppage time for catching Pierre-Emile Højbjerg when Giovanni Lo Celso struck the post but a fourth straight defeat would have been very harsh on Rafael Benitez's men.

The Spaniard had recalled Anthony Gordon to the starting XI at the expense of Alex Iwobi and welcomed Lucas Digne back to the left side of defence, dropping Holgate to the substitutes' bench and moving Ben Godfrey back to the centre.

Having taken so much criticism for their performances against Watford in their previous home game and again at Wolves last Monday, Everton needed to show their fans that they have the spirit and determination to fight for the shirt and they delivered in spades this afternoon.

It helped them establish the upper hand for the opening quarter of an hour against a Spurs outfit that has been under similar pressure for their own form in recent weeks but who were looking to impress new manager Antonio Conte.

Godfrey tested Lloris with a low drive after a smart interception in the sixth minute and Michael Keane couldn't divert a back-post header on goal from a free-kick a minute later while Digne's lovely volleyed delivery across the face of goal found no takers in the middle.

Tottenham didn't really threaten Jordan Pickford's goal until mid-way through the second half when Emerson Royal's header went over the crossbar and their next opening wouldn't arrive until the stroke of half-time when Sergio Reguilon arrived to meet Harry Kane's cross but could only despatch it into the Gwladys Street end.

In between, Gray had seen a shot deflected behind but Everton in a first half that yielded few genuine opportunities for either team.

The second half was five minutes old when Gordon's chance for glory arrived from a Gray centre from the left flank but the teenager couldn't keep his volley down. At the other other end, Reguilon turned inside Gordon and curled an effort searching for the top corner but Godfrey got a head on it to divert it behind and Ben Davies sliced a fizzing drive wide a few minutes after that.

After Benitez had replaced the impressive Delph with Tom Davies on the hour mark, Everton almost made the breakthrough. A flighted ball forward was flicked on by Gordon into the Spurs penalty area and Richarlison appeared to toe it past Lloris before going down under the French keeper's challenge.

Kavanagh pointed to the spot but after advice from Video Assistant Referee, Jon Moss, the on-field official reviewed the incident himself on the pitch-side monitor and, presumably determining that Lloris had also got a hand to the ball, overturned the penalty to a chorus of boos from the home faithful and angry protests from the Everton players.

Tom Davies had one shot deflected behind and another saved by Lloris before Gray himself saw a shot blocked as the Toffees tried to capitalise on an increasingly raucous atmosphere but their best chance fell to the former Bayer Leverkusen winger.

Digne and Davies exchanged passes in a neat one-two and the French full-back delivered a crisp low cross but Gray's attempt to steer it into the far corner with his instep lacked purchase and it skidded wide.

That almost proved to be a costly miss when Holgate, on as an 82-minute sub for Allan, lost the ball in midfield, Højbjerg picked out Lo Celso and the Argentine lined up a shot from 25 yards that smacked off Pickford's right-hand post and back into play.

Holgate's cameo got worse four minutes later. Clearing the ball outside his own box, the defender planted his studs into the back of Hojbjerg's thigh and was shown a straight red after another visit to the monitor from Kavanagh.

Thankfully, his sending off came too late to unduly damage Everton's cause and the contest ended 0-0 shortly afterwards.

The draw arrests the Blues' three-match losing streak but extends their winless run to seven games and it means the club will go into the final international break of the year sitting in the bottom half of the table.