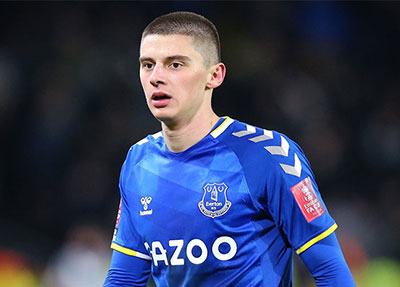 Vitalii Mykolenko has explained his absence from what would have been his first home game as an eligible Everton player as being down to a minor back problem.

The 22-year-old's £18m move from Dynamo Kiev was made official on 1st January but he was not registered in time to face Brighton at Goodison Park the next day.

Mykolenko's omission from Duncan Ferguson's matchday squad for the next home fixture against Aston Villa, which proved to be the first and only match of his second spell as caretaker manager, raised plenty of eyebrows, particularly given the fact Everton's other new full-back was also left out.

However, the young Ukrainian says that he had missed a few training sessions in the lead-up to the game after feeling discomfort in his back following his Premier League debut against Norwich the week before and wasn't sure he would make the squad for that reason.

Delph spoke in very positive terms about Everton's new recruit and backed him to be a success in the Premier League after joking that he spoke better English than Zinchenko did when he arrived in England.

“He's a prospect,” Delph said. “In training, he has a really high work ethic, always asking for the ball, and he has a great left foot. So, for me, I think he has a bright future at Everton Football Club.

“I think he's going to be fine. When you move to such a high-intensity league, you need time to adapt.”

Mykolenko spoke of the welcome he received at Everton and captain Seamus Coleman in particular.

"He texted me at night on New Year's Eve: 'Was great to meet you today. Happy you're part of the team. I get it's a difficult time for you but be strong and I'll be there to help you.'"

Keep him away from Delph! It's catching.

Comments like those from Delph don't fill me with confidence either.

He is considered to be one of Europe's brightest prospects at left-back. Give him time to settle down. It's not his fault that he's part of a dysfunctional defence or team; if Scheva rates him, then I'll give him the benefit of the doubt.

Tony Everan
4 Posted 01/02/2022 at 07:16:47
He’s 22, new country, new league, joining a club in turmoil that was just about to sack its manager. The lad will need plenty of support and a bit of time to find his feet.
Tony Abrahams
5 Posted 01/02/2022 at 07:27:07
He's now playing a totally different game of football from anything he will have ever played before, which means that he's going to need a little bit of time to hopefully adapt, to a very fast and physical league.

Good luck, Vitaliy, the name of the game is energy, and although it looks like you've got plenty of this, it's all about getting your second wind, which then gives you time to think!

Delph's been a professional footballer for 16 years and a Premier League player for 13. He served three seasons under one of the greatest managers to ever walk a touchline. And he was the starting left-back for a side that won 18 games in a row, the Premier League record.

If he says Mykolenko is going to make a fine Premier League left-back, I take his word.

Eddie Dunn
8 Posted 01/02/2022 at 15:25:56
Mike, Delph is also a member of the Flat Earth Society.
Kieran Kinsella
9 Posted 01/02/2022 at 15:39:44
Werner and Havaertz both came in from a tougher league than the Ukrainian one and spoke a lot about how difficult it was to adjust to the intensity in their first season. So it might take a while for this guy to adjust, a la Kanchelskis before him.

But he's 22 so has time on his side and Godfrey can do a job if needed in the interim.

There were two much shared stories on Twitter that contributed to this, plus his absence from the Villa game.

One was that Dunc told Moshiri he was crap. The second and even more fanciful was that Dunc met some Everton fans on the train on his way to his interview and told them that Mykolenko is complete crap, Patterson is not near ready, everyone is miserable at the club, and everyone hates Rafa.

Seems like a novel thing to share such info with strangers on the way to a job interview. But a lot of people took the bait and seem to believe this is all fact.

Glenn Hoddle believed in faith healing and heart touching, but it didn't affect his eye for talent.

He is also a rabid "Anti-vaxer". His take apparently is that the body's immune system is designed to deal with all these things on its own – and needs no help?

The body's ability to heal itself though is letting him down a bit with all the new and recurring injuries he suffers.

Give this lad a chance!!