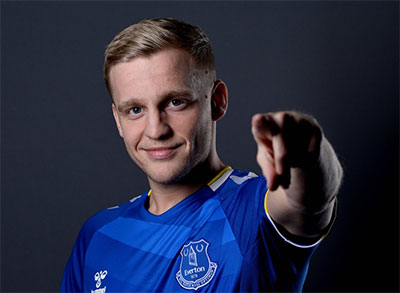 Donny van de Beek says that he is enjoying a new challenge at Everton whose desire for upward momentum mirrors his own.

The Dutchman has a new lease on life since joining the Blues on loan from Manchester United where he struggled for game time and hadn't started a Premier League game all season.

Speaking to Sky Sports, he said: “A new area, new teammates, a new coach it's a new start. This gives me a lot of new energy.

“If you see where the club is in the table, they also want to [move] up and I also as a player, I want to go again, show what I can do. I think this combination is good.”

His comments come amid an unsubstantiated report that he will seek a permanent switch to Goodison Park this summer if he helps keep the Blues avoid relegation this season.

The suggestions are that Van de Beek has no desire to return to Manchester United after his frustrating spell at Old Trafford where he failed to start a League game all season before moving to Goodison Park on loan.

He has been excellent for Frank Lampard on both of his appearances so far which has sparked hopes among Evertonians that the club might try and sign him permanently in the summer.

United bought him for £35m from Ajax 18 months ago but have barely used him.

Donny Van de Beek , as with the Leeds performance, brilliant but early days, every player and the team as a whole has to now find consistency, last weeks level of performance has to be a benchmark.

I am already thinking about next season with VDB signed permanently, important players we’ve missed like DCL & Doucoure fully fit and fired up and a couple of quality signings. Under Lampard and his coaching team, I am starting to believe that a top six challenge is achievable.

I think it should be illegal to print "according to reports" without quoting the source of said reports.

It's from The Mirror so it's Gospel of course!!

Let's see how the next few months go.

Dale Self
9 Posted 18/02/2022 at 16:56:57
Hell yeah he is...cue Jamie for some embellishment on that. That is an emphatic statement early on. He must be somewhat impressed with the staff and this one has been around a bit.

To be fair, I should let Jamie have a go before I go on but there are some decent players out there who have lost their love for superclubs and just want to get on with it.

Minik Hansen
10 Posted 18/02/2022 at 17:47:08
Maybe another loan spell and an option to buy. I don't even know how long his contract is with his parent club.
David Nicholls
11 Posted 18/02/2022 at 17:56:02
I don't think money is an issue. Just FFP. We need Moshiri to do some creative accounting. Problem is Man Utd will act like bellends as they have with Lingard. They can afford to pay players not to play. Proof FFP is a sham.
Kieran Kinsella
12 Posted 18/02/2022 at 17:56:36
Brazilian Jo scored two on his debut as a loanee and similar reports said it was a match made in Heaven and that he and the club wanted to make it permanent.

Moral of the story: don't rush to judgement after one game. Let's see what happens and how all parties feel come the summer.

If you think it's been frustrating for us Evertonians the last few decades. Imagine being a Dutch Evertonian. Only Heitinga was acceptable for one season, otherwise it was touch and go.

I won't go into the others, but to have Donny playing for us permanently would be wonderful, and a sign we're on the ascendency.

Also, maybe we should see how the rest of the season plays out (we all hailed Gomes as the next Arteta after his first appearance on loan).

Don't worry ,you can move on from Raymond Atteveld; it's been long enough... plus, he was probably secretly a Geordie.

At the moment, I would say there is a 10% chance that we will see VdB in a Blue shirt come the start of the season in August 22.

Of course, I hope to God that Everton sign him but I won’t get my hopes up too high.

It's not done so I'll keep my powder dry on the I TOLD YA!

I like the look of him but all we can do is make him feel wanted and see what happens at season's end.

Andy Wilkinson
22 Posted 18/02/2022 at 22:26:18
I think one forgets player power. Donny van de Beek is a class player who, for whatever reason, has not worked out at Man Utd. If he settles with us, why wouldn't he want to create a mutally agreeable transfer to our good selves?

Another mis-placement of a club would bugger him and his career. A happy and easy switch to us, if we turn this oil tanker of a club around, would suit all.

He's at his peak... he won't want to risk another failed placement when and if he's on the up with a forward-looking Top 6 Premier League club. If that's where we're heading... aren't we?

John Keating
23 Posted 18/02/2022 at 23:39:05
Let him just concentrate on his football and leave everything else until the end of the season. We have more than enough to worry about.

In a perfect world, it would be great if he's playing regularly for us and putting in MotM performances every game, coupled with scoring.

If, at the end of the season and us well clear of the Bottom 3, Lampard wants to keep him and Donny feels wanted and comfortable here, maybe something could be worked out.

Priority is everyone concentrating 100% on the remaining games this season.

Bottom line is, the bar isn't that high so yes, based solely on what little we've seen of him so far, he certainly looks a good fit but it's very early days and come hiring time for next season, he certainly won't be our only option if Man Utd try to hold us to ransom.

Kieran Kinsella
25 Posted 19/02/2022 at 00:53:21
Sources saying Everton are looking at toughening up the defense with the Iranian Hulk.
Brian Murray
26 Posted 19/02/2022 at 05:42:45
Most of the Sky / BBC kopite media and even some of our own fans have got our best players sold before it's even a discussion. Bad news is Richarlison for one says he wants big things in his career and wants to do that at Everton, so over to you, Frank and Co. So a bit of a creative savvy transfer summer may really push us up.
Steve Shave
27 Posted 19/02/2022 at 06:57:40
Too early to call this one, we have the rest of the season to cast a firm eye over him. He was absolutely superb at Ajax and has looked the part for us so far in two games.

I like him a lot already but I have my doubts Man Utd will offer him at a decent price and we have FFP to think about.

The £30M it will likely cost to get him will need to be spent carefully elsewhere I suspect. I think Richarlison and Mina will go in the summer.

Van de Beek is always being ignored by his teammates

Short but sweet way of saying Donny van de Beek was great at Man Utd, just that their players were not smart enough to see his movement on the pitch and use him properly. When they did, though, it often lead to productive outcomes!

I appreciate YouTube doesn't tell the whole story, yet given Van de Beek was a Ballon D'Or nominee from his Ajax performances, there may be some truth in this.

If VDB shows he's a legit top-league player while with us, I'd imagine ManU will team him with Fernandes in the middle with Pogba gone.