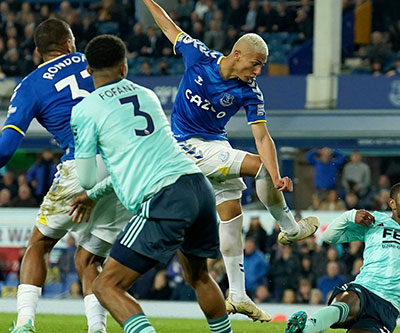 A dramatic stoppage-time equaliser by Richarlison salvaged what may yet prove to be a precious point for Everton just when it looked as though Leicester City were going to deal them another damaging defeat.

The Brazilian had wasted two gilt-edged opportunities to level the match, one in each half, but he atoned for his profligacy with time running out and the Blues increasingly desperate.

Leicester had led since as early as the fifth minute when Harvey Barnes found the net via the inside of the post and the visitors looked good value for their advantage until Anthony Gordon centred and Richarlison inexplicably miscued in front of goal in the 17th minute.

Seamus Coleman had already had to make a saving tackle to deny Kiernan Dewsbury-Hall in the first minute of the match and James Maddison tested Jordan Pickford with a shot in the 11th from Kelechi Iheanacho's lay-off but Everton gradually found their feet and eventually caused the visitors a couple of problems towards the end of the first half.

Demarai Gray, in the side in place of the injured Dominic Calvert-Lewin, ended a well-worked move down the left by whipping in a cross that Richarlison couldn't divert on target and the former Leicester winger missed by inches a couple of minutes later when a short corner routine came to him on the edge of the box but his curling shot bent wide.

The hosts came out for the second half determined to exert some pressure on the Foxes and Alex Iwobi saw a 25-yard attempt drift over while Gray despatched a more wild shot from similar distance into the Gwladys Street End.

Frank Lampard opted for a more attacking posture when he withdrew Allan in the 58th minute and introduced Dele Alli for a rare appearance and Salomon Rondon joined him eight minutes later as Gray made way and the Venezuelan almost made an immediate impact.

Rondon challenged for an aerial ball that dropped into the path of Richarlison and he unloaded Everton's first shot on target but Kasper Schmeichel parried it before gathering at the second attempt. And a near-post flick-on by the substitute later in the half almost fell to Dele at the far post but it flew over the former Spurs man's leap.

Leicester then tried to capitalise on the Blues' need to push forward as Maddison had a shot parried away by Pickford, Iheanacho saw an effort deflect over before Fabian Delph got enough on two goal-bound Maddison drives to deflect them behind to safety.

Meanwhile, Richarlison, having won a corner on the left for Gordon to take popped up unmarked around six-yards to meet the winger's dead-ball delivery but made a mess of the header and the ball bounced wide off his shoulder, to the anguish of the home crowd.

He would get one more chance, though, as an increasingly fractious contest wore into five minutes' worth of stoppage time. Coleman had a sight of goal but dallied and his shot was blocked but when Everton kept it, the ball was worked back to Dele out wide.

He crossed low, Rondon did enough to ensure it by-passed Wesley Fofana and Richarlison scuffed it in such a way that it bobbled past Schmeichel and spun into the far corner.

The Brazil international would win one last corner for Everton to try and snatch the points but it was no to be and Lampard's men had to be content with a hard-won draw.

It leaves them sitting four points above Burnley who are in action tomorrow evening against Southampton but it also increases the pressure to start grinding out results away from home while taking full advantage of the three home fixtures that remain.