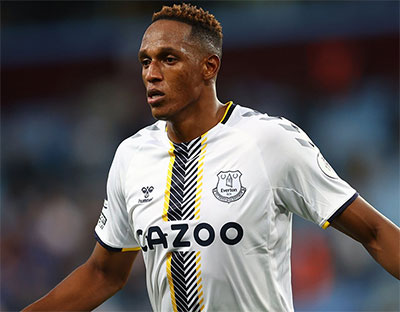 Frank Lampard says that Yerry Mina will have a scan on his calf after the Colombian was yet again forced to leave the field early due to injury today while Vitalii Mykolenko might merely have been suffering from cramp.

Mina had to come off after just 18 minutes of the 2-1 win at Leicester City after feeling a twinge in his calf. He was playing successive games for the first time since he had to be substituted after 35 minutes at Newcastle back in February with a thigh problem.

Lampard said yesterday that the club are hopeful Mina hasn't suffered a tear and that he will still be able to play a part in the final four games.

“Yerry had a small feeling in his calf,” the manager explained. "We don't know [the extent of it yet]. Hopefully it isn't a tear. He felt it in his calf, so he had to come off.

“We're hoping it's not a high-level injury and we can keep him involved in the next two weeks. He will have a scan tomorrow.

“With Myko, we hope it was just cramp. It would be a result if that is the case.”

We need to move him on even though he's great against top teams. He got into the face of Harvertz or Cavani and riled them up. But his injury record is poor.

Think about this: it's better sales value when the player is not injured. It makes me feel better when he's been taken off.

Alan J Thompson
5 Posted 10/05/2022 at 05:13:09
While the number of injuries Mina suffers seems quite high, some comments seem to be along the lines of "Never mind the quality, feel the width". Has this been the case throughout his career, as I seem to recall he had similar injuries in the World Cup Finals?

While I would like to keep him, as our defence seems so much better whenever he plays, you would think that his next contract would reflect the number of games he has had to miss.

Peter Neilson
6 Posted 10/05/2022 at 06:56:40
It's a shame about his injury record as he's our best centre-half but they are too frequent to rely on him. Maybe he thought that, if he played on, it would have resulted in a much worse injury. He's probably the best judge of the warning signs.

Percentage-wise he's missed as many internationals as domestic games. I don't think there's any reason to doubt him, he's just unfortunate in being susceptible to this sort of thing.

Derek Moore
7 Posted 10/05/2022 at 07:23:23
Best ability is availability, and this boy doesn't have enough of it for me. He's not going to take a "pay as you play" type deal – and this makes his cost per appearance figure far too high to be palatable.

He seems a good lad, and he's a boss defender when he plays. There's the rub. It's time to look elsewhere.

Paul Hewitt
8 Posted 10/05/2022 at 09:17:32
Being a Rugby League fan as well, I've know players carry on playing with broken jaws and fingers and other parts of the body. Modern footballers make me laugh.
Dave Abrahams
9 Posted 10/05/2022 at 10:05:24
Paul (8), I think Holgate didn’t travel with the first team because of illness on Saturday and made his own way to Leicester on Sunday, that is according to Everton FC’s website, but he put his hand up to play against Leicester and played his part in Everton’s win, that is the spirit we need from all the players, the fans have shown we have got it in abundance as we move forward to getting the points that will make us all happy.
Allen Rodgers
10 Posted 10/05/2022 at 14:45:39
Paul @8, I'm sure you know in 1958 Alan Prescott broke his arm in the 3rd minute of a test match but carried on to lead his side to victory. The magic sponge did its job that day!

Back on topic, looks like Mina is out for the season and should regrettably be moved on.