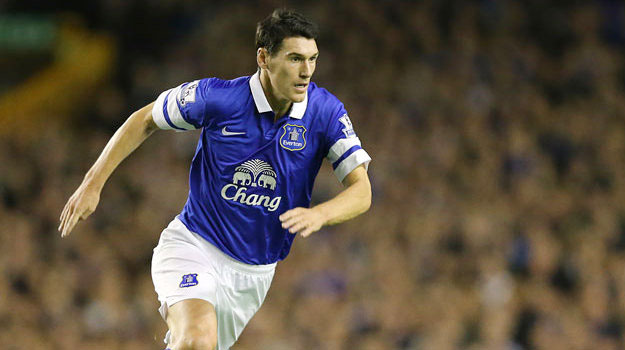 Gareth Barry was one of three players who arrived at the 11th hour on transfer deadline day in September 2013 as Roberto Martinez made good on his pledge to improve his squad before the window closed. The England international arrived on a season-long loan from Manchester City along with Romelu Lukaku from Chelsea, also a loanee, and James McCarthy who would become the Blues' most expensive acquisition since Marouane Fellaini who, coincidentally, left Goodison Park at the same time.

Born in Hastings, Barry began his career as in Brighton and Hove Albion's youth setup before transferring to Aston Villa in 1997 and making his debut playing as a centre-half in a back three in May the following year. Demonstrating his versatility, he moved to left midfield before eventually making his name as an enterprising central midfielder and team captain at Villa Park where he would make more than 400 appearances over the following 11 years.

He fell out with the club in the summer of 2008, though, when Liverpool came knocking with a series of bids for his services. Initially critical of then manager Martin O'Neill for not trying hard enough to keep him, Barry then expressed a desire to move to Anfield to play Champions League football but all of the Reds' offers were rejected by the Villa board. Barry was stripped of the captaincy, fined and banned from training as a result of his stance but he would remain in the Midlands for a further year.

In August 2009, he made a £12m move to City as part of the massive spending programme undertaken by owner Sheikh Mansour and would realise his dream of playing in the Champions League and lifting the Premier League title in his time at the Etihad Stadium.

At the age of 32 and with his first-team prospects diminished by the arrival at City of new manager Manuel Pelligrini, Barry was alerted to Everton's interest in his services in late August 2013. Martinez's first-team had been disrupted by injury to Darron Gibson on the eve of the 2013-14 season and, with Fellaini mooted to join ex-boss David Moyes at Manchester United, cover for central midfield had become one of the Spaniard's top priorities.

The move for Barry, reportedly initiated a few days before the deadline, was complicated by the fact that he was in the final year of his contract and City's preference, therefore, was to push through a permanent sale rather than a loan. An agreement was reached, however, late on the night of 2 September and Barry put pen to paper on a year's loan, with the option to make the move permanent in the summer of 2014.

Barry made his Everton debut in a crucial match for Roberto Martinez — his first real test against the big-monied boys in the shape of Chelsea and Jose Mourinho's return to the Premier League.  And the experienced midfielder slotted into the defensive midfield holding role vacated by Fellaini like he was part of the Goodison furniture. Indeed, one interception on Chelsea's own newcomer, Samuel Eto'o, prevented a certain goal and helped preserve a vital victory.

Barry went on to play a huge role in Everton's excellent first season for new manager Roberto Martinez, who said in December: "You always find it difficult to find a No 6, that defensive midfielder who is tactically aware in the English game. Gareth has developed a continental approach in that role, and that's quite unique. If he was a foreigner, then maybe he would be a bit more glamorous for everyone to highlight."

His value lies not just in his rarity as a left-footer and a tactically astute Englishman. Barry can drop into defence, sometimes splitting the central defenders and in effect fashioning a back three, while Leighton Baines and Seamus Coleman bomb forward. Everton's newly found attack-minded approach under Martinez required a midfielder who can stop counterattacks: Barry's total of 10 bookings shows he often resorts to cynical methods; the suspicion is Martinez tacitly condones them.

Rumours were rife that the midfielder's wage demands would be too expensive for Everton to sign him up full-time, with Arsenal mooted as the most likely suitors when he was released by Manchester City (along with Joleon Lescott) on 24 May 2014.   There followed more than a month of uncertainty and speculation before a deal was finally announced on 8 July 2014, with Barry signing permanently on a three-year deal which included a £1m payment to City as part of the original loan deal.

Martinez continued to use Barry as a pivotal member of his team in 2014-15, despite trying to introduce more squad rotation to deal with the rigours of European competition. However, playing two defensive midfielders was considered by some to be stunting what little creativity there was for a side that seemed to have forgotten the simple ethos of last season, and who were playing with too much fear of losing possession.

He was forced to change things when Barry's ankle was damaged in a poor tackle by Sunderland's Jordi Gomez.  But Barry ended up only missing one game through injury in 2014-15, although he missed a lot more through suspensions, for five, and eventually ten yellow cards, plus getting two yellows at Stamford Bridge.

Despite the inherent contradiction in supposedly playing bright attacking football while persisting with two defensive midfielders, Martinez's faith in Gareth Barry as the linchpin of the sputtering Everton side in 2015-16 was repaid by solid and reliable performances from the veteran.

Under the Spaniard's successor, Ronald Koeman, he would go on to cement a new and more effective defensive midfield partnership with Idrissa Gueye after the Senegalese player arrived from relegated Aston Villa, while Barry would celebrate his milestone 600th Premier League appearance with a very well-taken goal against Middlesbrough.

Barry would continue to top up his tally of top-flight appearances under Koeman, increasingly off the bench as a substitute over the latter half of the Dutchman's first season following the arrival of Morgan Schneiderlin from Manchester United and the emergence of Tom Davies from the U23s in January 2017.

The acquisition of Davy Klaassen in the following summer transfer window coupled with the return to fitness of Muhamed Besic further increased the competition for places in central midfield and, now aged 36, Barry felt that a move away from Everton would offer him a better chance of seeing regular action in the twilight of his career.

Although he had signed a one-year contract extension earlier in the year, Barry secured a move to West Bromwich Albion in August, bringing to an end four successful years at Goodison Park.

Barry would talk years later of Koeman making him feel unwanted at Everton: "I kept seeing my name linked with other teams and getting involved in player deals coming in and I felt that I wasn't wanted as much. Now Ronald has come out and said he was desperate to keep me, so I'm not sure if it was him or the hierarchy above him that were feeling my time was up.

"As I've done, at all of my clubs apart from Villa - but like at Man City when I joined Everton - once I felt I wasn't wanted, I was looking to go and play elsewhere. I wanted to continue playing first-team football."

"I wasn't desperate to leave the club, to be honest," he adds. "And I've always backed myself and even that year I could see myself playing games. But I just felt, for some reason, the club didn't want me around as much and it was the right time to go. It was a tough move and I definitely wouldn't have minded a fifth year at Everton."

Koeman was sacked as Everton manager two months into the season after a poor start.