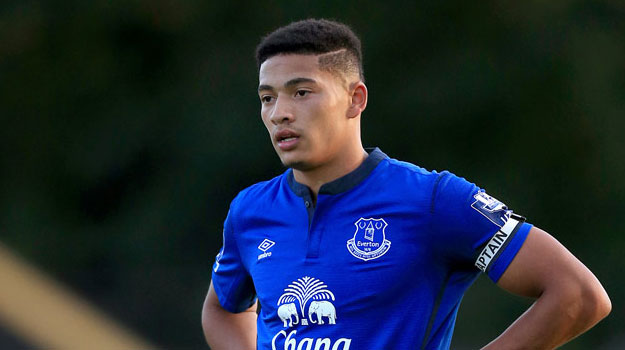 Born in Liverpool, the youngster joined Everton in 2004 at the age of just 10. He made a handful of appearances for Everton's Under-18s during the 2009-10 season, and was also a part of Everton's 2010 FA Youth Cup squad.

Tyias was selected as a part of a new crop of England Under-17 internationals for the annual Nordic Tournament, alongside Everton Academy teammate John Lundstram. He is also eligible to represent China at international level through his grandfather.

In June 2011, Browning signed a two-year professional contract with the Club, just weeks after he had helped Everton to the Under-18s national title.

In 2011-12, he featured more for Everton Reserves and it was here where he made his mark, fitting in seamlessly against far more experienced opposition.

He got a runout against Bulgarian Champions Ludogorets Razgrad in the 2012 preseason, where he was wearing the Number 16 shirt but he went back into the Reserves / Under 21s for the first half of the new season, and was assigned the Number 40 shirt when called upon to make up the numbers on the subs bench against Chelsea in the final Premier League game of the 2012 calendar year but did not feature anytime in 2013 as he continued to gain experience with the Reserves.

He then went out on month-long loan to Wigan in January 2014 but only played in two games before he made another visit to the senior subs bench, preferred over Luke Garbutt for the visit of West Ham Utd in March 2014. He was named Everton Under-21 Player of the Season and debuted for England Under-21s in the Toulon Tournament in May 2014.

By that stage, he was considered ready by Roberto Martinez to make the step up to the first team and he was included in a couple of pre-season games that summer before finally making an accomplished senior debut as a substitute in the cauldron of the Anfield derby in September 2014.

Martinez was typically effusive about Browning following his debut at Anfield: "He showed incredible composure and great pace. He's a phenomenal defender who gave us real penetration. Between the pair of them (Hibbert), they did a terrific job for us."

Another substitute appearance soon followed, against Manchester United, but Browning would not play again until December in the dead rubber against Krasnodar in the Europa League which also proved to be his last senior outing of the season.

A clue to his absence from the first team over the remainder of the 2014-15 season might have come the following summer when he elected to join the Under-21s squad in their training camp in Austria where, it was said, he felt more comfortable.

If he lacked confidence in his belonging in the senior side, it didn't show when he was handed a start against Stoke City in the Asia Trophy in Singapore where he had an accomplished game, first at centre-half and then at right back in a goalless exhibition match that was decided in Everton's favour on penalties.

He went on to play in a handful of Premier League games as a stand-in for Seamus Coleman in the early stages of 2015-16 but suffered an injury playing for Everton's U21s in November. He was forced to go under keyhole surgery on his damaged knee that required months of rehabilitation, dealing the young defender a significant blow just when he was hoping to take the next step in his development. Roberto Martinez revealed that the 21-year-old would not play again until next season.

He started playing again for the U23s in November 2016 after he'd recovered from that bad knee injury. Everton signed him to a new 2½-year contract and sent him on a loan spell at Preston NE were he made 8 appearances in the Championship for the Lillywhites.

In July 2017, he joined Brendan Galloway on a season-long loan with Sunderland, where he should get the opportunity to gain more competitive experience as the Black Cats bid to return to the Premier League at the first time of asking following their relegation in May, his No 27 shirt being assigned to new arrival, Nikola Vlasic.

Browning was initially well thought of by Sunderland fans at the start of the season and got some real experience of Championship football as Sunderland struggled near the bottom of the table, playing in 29 games overall as the Black Cats struggled to avoid the drop.

After not playing for a month, in November 2017, he forced his way into Sunderland’s starting lineup for good, and had been gaining crucial experience through the winter.

But he suffered a groin injury during the loss to Aston Villa in early March 2018. Subsequent scans revealed the problem was worse than first thought and he was ruled out for the rest of the season.

Browning returned to Everton for pre-season but was not included in the first-team squad by new manager Marco Silva and ended up playing for the Under-23s as he was unable to secure a move away. But Silva was forced by injuries to call him up to the first-team bench for the 4th Premier League game, where he wore shirt number 35 on the bench.

He continued to play occasionally for the U23s until February 2019 when he secured a permanent move to Guangzhou Evergande in China for an undisclosed fee.

Browning has since become a naturalised Chinese citizen and plays  in the Chinese Super League under the name Jiang Guangtai, making a number of appearances for the Chinese national team as well,