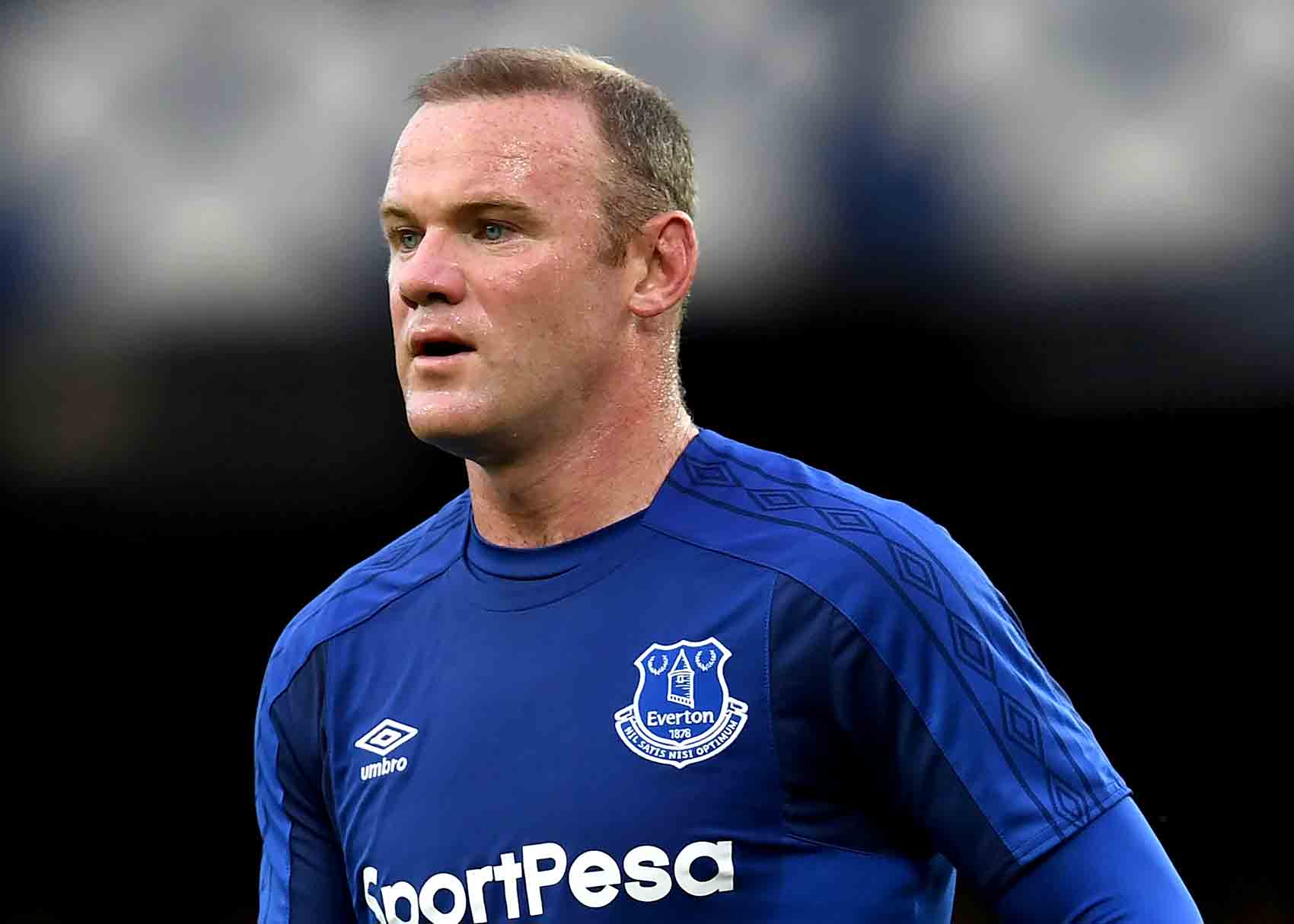 When Wayne Rooney announced himself to the Premier League with a sensational last-minute winner that ended Arsenal's 30-match unbeaten run in October 2002, commentator Clive Tyldesley enthusiastically told viewers to "remember the name" of the young Everton forward. Up until then, the 16-year-old's talents were the Blues' best-kept secret because most Evertonians were already acutely aware of a player who would go on to become a household name and one of the most recognisable faces in the global game.

There had been a buzz around Rooney among those who followed Everton's youth setup for years and he had already started to fulfil his rich promise when he scored a stunning goal in an FA Youth Cup semi-final at White Hart Lane the previous season.  Later, in the final, he would flash an undershirt emblazoned with the quote that would come to represent bitter irony in 2004 and then symbolise the return of the Prodigal Son 13 years later in 2017: "Once a Blue, Always a Blue"...

Liverpool born and raised in Croxteth, Rooney was just days away from his 17th birthday when he exploded into the national consciousness with that one phenomenal swing of the boot against the Gunners.  Three weeks earlier he had notched his first senior goals in a 3-0 League Cup win at Wrexham, confirming the feeling at the club that they had found the answers to their prayers in a home-grown product capable of leading Everton out of more than a decade in the doldrums.

He followed that goal with a real predatory masterpiece against Leeds United that was to slay Everton's 51-year Elland Road hoodoo and a display of technical genius, physical strength, and mental determination with his third league goal against Blackburn after that.

A lucrative three-year contract followed in January 2003 as the club tied their rising star to the longest terms permitted for a player of his age but Rooney's exploits on the domestic and then international stage eventually made him impossible to hold onto.

In 12 February 2003, still only 17 years and 111 days of age, Rooney became the youngest England player ever when he came on at half-time of an international friendly against Australia. By the following summer, he was the bright light threatening to take England all the way at Euro 2004 before a broken metatarsal sustained in the ill-fated quarter-final against Portugal ended his tournament.

Rooney would go on to score goals for his country than anyone before him and rack up 119 appearances but those precocious performances in Portugal where he scored four times would, in hindsight, represent the pinnacle of his international career. A leader of the Three Lions at subsequent major tournaments, he would, unfortunately, find himself at the centre of successive inquests into the glaring failure of the national team at the European Championships and World Cup.

His exploits in that 2004 tournament paved his road out of Goodison Park in August that year, however. It was both an acriminious and frustrating parting of the ways as Manchester United prised him away from his boyhood club in a deal that would ultimately be worth £27m once all the appearance and trophy-related add-ons were taken into account. It was a large fee at the time but still never felt to Everton fans as though it was enough.

David Moyes and Bill Kenwright had vowed repeatedly that he was not for sale but with his agent Paul Stretford feverishly working on making the move to Old Trafford happen, combined with the teenager's own attraction to the bright lights of Old Trafford and the chance to join Alex Ferguson's all-conquering Red Devils, Everton ultimately didn't stand a chance.

A hat-trick for his new club on his debut served to rub salt into Evertonian wounds, as would the sight later in his career of the still immature Rooney responding to taunts from the Goodison crowd by kissing the United badge after scoring a goal on his old stomping ground in L4.

Over the years, his relationship with the Goodison crowd went from fractious to bitter but through it all, in an insurmountable contradiction for many fans, Rooney remained a Blue at heart. His children would become Evertonians and he attended the 2009 FA Cup Final with young Kai dressed in Everton blue, the beginning of a thaw in his frosty detente with the fans who once idolised him.

By 2015, Rooney's standing at Goodison had improved to such a degree that he was asked to turn out in the Royal Blue jersey for the first time in over a decade for Duncan Ferguson's testimonial. And when his own testimonial for United rolled around the next year, it was Everton whom he chose as the opposition.

In between, Wayne had broken Bobby Charlton's long-standing goalscoring record for England and 2016-17 saw the former Blue do the same for Manchester United, surpassing the Red Devils' legend with his 250th goal in their colours in January 2017.

With that milestone successfully passed and him no longer an automatic starter under then United manager Jose Mourinho, the rumblings around a possible return to Goodison began in earnest. A loan switch that was mooted that month didn't come to fruition but a permanent move back to Everton for around £10m was concluded in July 2017.

Rooney, then 31, signed a two-year deal and effectively swapped places with Romelu Lukaku who left the Blues in a record-breaking deal between English clubs when he signed for Man United for £75m (with a further £15m in add-ons) and, true to form, he scored on his second Premier League debut for the Toffees in a 1-0 victory over Stoke City.

Less than a fortnight later, he announced his retirement from international football, explaining his desire to focus on helping Everton become successful again as his primary motivation. However, that romantic notion was soon tarnished when he was arrested for drink driving with a single mother in his car while his pregnant wife Collen was away on holiday in Majorca.

Rooney would weigh in with 11 goals over the next few months, three from the penalty spot, the leading scorer in a team that crumbled under the weight of poor recruitment in the summer of 2017, a gruelling start to the 2017-18 season and the increasingly rudderless management of Ronald Koeman. The Dutchman was sacked that October and, after David Unsworth was unable to spark a genuine revival in an interim capacity, Everton's major shareholder, Farhad Moshiri, made the controversial decision to hire Sam Allardyce to ensure a relegation battle wouldn't be on the cards.

Perhaps the biggest loser under Allardyce was Rooney, who still harbours resentment over how his second spell at Everton came to a less-than satisfying end. Rooney was withdrawn into a deeper midfield role and initially appeared suited to the position. However, with age rapidly catching up with him and inconsistency of distribution creeping into his game, there were fewer guarantees over his starting role in the team. By the time Allardyce was replaced by Marco Silva after the season had concluded, Rooney was already sounding out Major League Soccer club DC United over a potential move to the United States.

“Everton made it clear towards the end of the season that they’d be happy for me to leave. For whatever reason, I still don’t know. I felt I was doing okay, I was top goal scorer [despite] playing most of the season from midfield.

“I said to Everton, ‘Listen, I’m not a kid and if [leaving the club] is what you want, tell me. If you want me to stay, tell me’ and we talked about it.”

The former England international had a year remaining on his contract with the Blues and while it was reported he would have preferred to stay and perhaps deferred a move across the Pond by a year, it was apparently made clear to him that he was not to be part of the new regime's plans.

"There were things that got said, or didn’t get said. At the end of the day, all I wanted from Everton was a bit of honesty with the situation.”

He concluded a deal with DC in June 2018 and officially signed for the MLS outfit when the US transfer window opened on 10 July, the second year of his contract cancelled by Everton who stood to save around £8m in unpaid wages.

Rooney settled in surprisingly well, becoming a talisman with DC United and having a fine spell as he scored 10 goals for them in his first 4 months as an MLS star player. He would go on to score 23 goals in less than 50 games before returning to England and a chance to ease his way toward possible future management with a player-coach role at Derby County, starting in January 2020.