The League Cup, and a little bit of rotation for the Everton stars, Yakubu, Arteta, and Cahill  rested, with starting action for James Vaughan, Lous Saha (his full debut), and Jack Rodwell.  But the troubled defence remains unchanged... in the hope that they might get to know each other a little better...?

The bench included Cahill and Yakubu just in case, with Tony Hibbert returning after recovering from knee surgery.  Just one of the Blackburn players who beat Everton at Goodison a month ago started tonight for the home side.

Blackburn settled a lot more quickly than Everton, who continued to pass poorly, loose position, defend poorly... and give up the early goal.  Full-back Olsson pretty much strolled through on Blackburn's first real attack after being fed the ball by Robbie Fowler and he slotted it firmly between Howard and the post.

17-year-old rookie Jason Brown came on in place of Paul Robinson just after the goal, a muscle pull seemingly...  But the Blues very nearly went two goals down when Derbyshire looked to have beaten Lescott who was both relieved an lucky to see the ball end up in Howard's grateful arms.  Everton had been playing very poorly, with no cohesion, never mind decent basic passing, but started to do more into the second quarter of the game.

A nice Rodwell cross was met by Jagielka, his header flashing across goal.  Later,  another good cross from Rodwell and Fellaini could have perhaps done better with a header that went a foot wide. A kick up the pants for both the lackadaisical new signings at half-time: Castillo and Fellaini were dragged off by Moyes to be replaced by Cahill and Yakubu for a bit more spirit and desire.  Who says he isn't going for it?  The travelling Blues reacted in good voice.

But the next big roar was one of horror for a let-off for Everton, the ball skimming off Jagielka's head to set up Derbyshire one-on-one with Howard but he drove the ball thankfully wide.

As the game wore on, and Everton pushed, Osman sent in a great corner, and Vaughan powered it into the net... along with the keeper.  Disallowed.  A chance then fell to nemesis Fowler but fortunately he screwed it wide.

Baxter came on as a last gasp attempt to turn the game and came out from the off with a stinging shot at Jason Brown. But it was not to be.  A somewhat predictable result on the back of another inadequate performance, underlying much of the difficulties Everton are currently going through.

Everton open up a third front in their 2008-09 campaign as their involvement in the Carling League Cup begins with a tricky fixture at Blackburn Rovers.

With their two-legged Uefa Cup tie against Standard Liege hanging in the balance at 2-2, the Blues have the opportunity to progress in the season's first domestic cup competition by gaining revenge against the team that inflicted upon them a 3-2 defeat on the opening day of the season.

Since that last-minute victory, Paul Ince's side have appeared less than convincing, drawing at home withy Hull, losing 4-1 at West Ham before being drubbed 4-0 at Ewood Park by Arsenal. Saturday's 1-0 win over Fulham was their first league win since beating Everton a month ago so David Moyes will be fancying his chances now that he has a stronger squad on which to call.

Of course, much will depend on how his faltering back line react to yet more embarrassment at the weekend when they gifted Hull a 2-0 lead before the forward line finally got their own act together and rescued a point. Captain Phil Neville issued another Dads Army-esque rallying cry this week saying that the team are working hard to stamp out the mistakes at the back and this will be a decent examination of that. Blackburn have height in their side and their winner on the opening day came from a set piece.

The Carling Cup is usually Moyes's opportunity to indulge in some player rotation but the small size of his squad coupled with the fact that he drew Premier League opposition at the first hurdle will limit his ability to mix things up.

Deadline-day acquisition, Carlo Nash, is cup-tied meaning that Tim Howard will continue in goal and likely won't get the opportunity to ponder his own form from the bench. 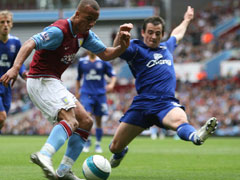 Leighton Baines: could get another look-in

Leighton Baines may get a look-in again at left back with Joleon Lescott dropping to the bench but the rest of the defence will probably remain unchanged, while in midfield Segundo Castillo and Marouane Fellaini especially could benefit from more game time to acclimatise to the English game. One of Tim Cahill and Leon Osman could be rested after playing three games in a week after returning from injury while Mikel Arteta is a doubt after coming down with illness this week.

Dropping one of those three would allow the manager to go 4-4-2 with either James Vaughan or Sunday's star man, Louis Saha, partnering Yakubu up top.

With Manchester City's money putting a different perspective on the race to gatecrash the top four and Aston Villa showing signs of having got their blend right this season, the cups may provide Everton with their best shot at European football next season.

As such, the Blues can't afford to take this game lightly. Rovers have shown that they are apt to concede goals and Everton have shown plenty of ability to score — it's in defence where Moyes's side could win or lose the tie.