The dreadful start that Everton made to the 2008-09 season may have realistically put paid to the Blues' Champions League aspirations before the campaign had really got going but finishing in the top four was certainly a possibility for David Moyes's side... until, perhaps, the full-time whistle at St James Park today.

In the final reckoning, the Blues may look back on this as the match where the dream of breaking the Sky Four stranglehold on the Champions League qualification places this season came to an end. If the twin failure to capitalise on the first-half dismissal of Kevin Nolan and kill off a poor Newcastle side and dropped points by Arsenal and Aston Villa didn't do the trick, the potential loss of Mikel Arteta for the remainder of the season almost certainly will.

As if to underscore such a pessimistic point, Everton dominated this match, before and after Nolan was sent off for planting both sets of studs on Victor Anichebe's shin, but were painfully impotent in the final third and the crucial winning goal was to elude them.

It wasn't for lack of effort by any of the three strikers who played a part in ths game, though. Jô ran the line superbly but didn't get a sniff of a chance on goal, Anichebe was in bullish and disruptive mood before he hobbled off with a Nolan-inflicted leg injury, and Louis Saha played 15 lively minutes to complete his rehabilitation from a hamstring injury. 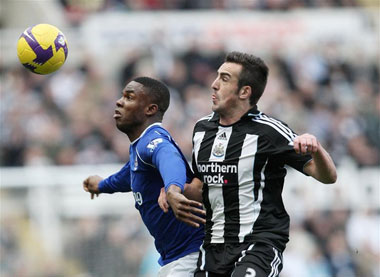 But Moyes's side consistently let themselves down with the final ball, their case not helped by Phil Jagielka's deployment as an emergency right back, a decision that left Lars Jacobsen on the bench still waiting for his debut, another patchy display by Arteta's replacement, Segundo Castillo, and a disappointing return by Marouane Fellaini, who came on in Anichebe's stead.

That left the onus for creating chances through the middle to Jack Rodwell and Phil Neville, both of whom acquitted themselves well but neither could be regarded as playmakers — or in the former's case, not yet.

Not surprisingly, therefore, Everton's greatest threat came from set-pieces and with a bit more luck they might have scored twice in the first half when the Barcodes still had their full complement of 11 players. Joseph Yobo's glancing header off a 19th-minute Leighton Baines corner was brilliantly stopped by Stephen Harper's reflex save and hacked off the line by Bassong.

Nine minutes later, Rodwell's volley off Dan Gosling's corner seemed destined to sneak inside the post but a combination of the keeper's and a defender's legs kept it out. In between, Jagielka had ghosted in at the back post to connect with Baines' deep cross but he smashed his volley wide from the angle when a more natural attacking wide player might have done better.

The home side should have made the visitors pay for not cashing in on their superiority just past the half-hour mark when Peter Lovenkrands found himself with just Tim Howard to beat but, thankfully, he whipped his shot the wrong side of the post. 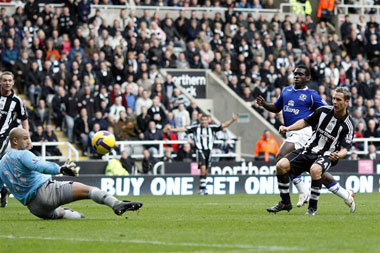 And Newcastle had the ball in the net in the 40th minute but Shola Ameobi had also bundled Howard across the line with it and referee Lee Mason correctly whistled for a foul.

Mr Mason had an equally important decision to make four minutes later. Anichebe was in the middle of another surging run towards the Newcastle back line when a poor touch left him stretching for the ball and Nolan went in with both feet, leaving the striker writhing in agony and the referee reaching for his top pocket to brandish an automatic red card. 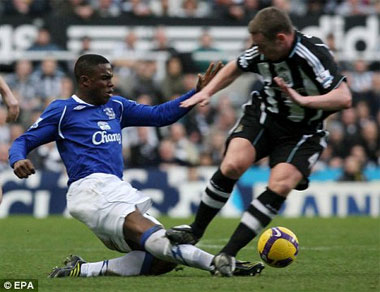 This Press Association photo shows the ugliness of Nolan's challenge

Moyes gave Anichebe a few minutes to try and run it off, probably too long, but it was clear six minutes into the seven additional minutes added on for stoppages that he couldn't continue and Fellaini was introduced.

The second half should have been all about Everton and in terms of possession, it was. At times, it was one-way traffic but a general lack of imagination characterised the Blues when they got into the final third.

Another corner might have yielded a goal when Yobo picked up the ricochet from Joleon Lescott's blocked effort but drove a left-footed shot over the bar despite being given plenty of time to pick his spot.

In the main, though, the Blues either elected to or were restricted to long-range shots but Rodwell, Castillo and Saha all blazed over from outside the box and when a cross from either side did find a Blue head, Jo was let down by the lack of pace on the ball and could only plant a header into Harper's arms.

In between, Newcastle managed a rare foray into the danger zone when Jonas Gutierrez, a second-half replacement for Duff, was released by Obafemi Martins' throughball but he lifted his shot over Howard and the crossbar.

Everton, though, had the last two opportunities, first when Rodwell was fouled by Butt in a dangerous area but Jagielka and not Baines took the resulting free kick and wasted the chance by skying it. Then, Rodwell screwed a right-footed shot narrowly wide in injury time.

His frustration complete at the final whistle, Moyes was no doubt forced to dwell on the fitness of Arteta but admitted in his post-match interview that he "feared the worst" for his star player. The Spaniard seemed to know immediately that he had suffered a serious injury and only the scan he will undergo this evening will erase fears that he has ruptured his cruciate ligaments and avoided a lengthy layoff.

On the plus side, his other talisman, Tim Cahill, returns next weekend against West Bromwich Albion but the question over who can take up the role of playmaker and inspiration in midfield will remain.

Certainly, Fellaini showed few signs today that he can be that player, despite his hefty price tag and all the accompanying expectation. Granted he was not fully fit but he again looked slow and uninspiring.

Neville was never going to be that player, Rodwell is still too green and probably too defensively minded, and Castillo is suffering from the predictable lack of sharpness and confidence that comes from spending most of the season on the sidelines. That leaves the Blues banking on Fellaini rsing to the challenge, the quick return of Steven Pienaar and, despite poor form of late, Leon Osman to get some creativity back into the midfield.

Come what may, though, if Arteta is out for the rest of the campaign, the prospects of finishing in the tope four, perhaps even the top five would seem slim and, on today's evidence, the dreams of a Wembley final in the FA Cup will be significantly dented by the Spaniard's absence.

The Blues have overcome adversity for much of this season, though, and it would be premature to write them off even if the worst fears for Arteta are confirmed this coming week.

One defeat in the last 13, progress to the last eight of the FA Cup, and real self-belief seemingly coursing through their veins, Everton enter the last third of the Premier League season hoping to keep alive the outside chance of Champions League quailfication.

Manchester United may have found the kind of form that has made the destination of the title more or less a foregone conclusion, but the rest of the top five have had their bouts of inconsistency. Whether two of Liverpool, Chelsea, Aston Villa and Arsenal will falter sufficiently for the Blues to sneak into the top four is probably wishful thinking but David Moyes's side are well placed to capitalise should the unlikely happen.

Their cause would appear to be undermined by continuing selection problems which will deprive Moyes of Marouane Fellaini, Steven Pienaar and Leon Osman through injury and Tim Cahill and Tony Hibbert through suspension for this weekend's trip to Newcastle. But Everton have shown in recent months that the closer their backs are to the proverbial wall, the better they dig in and can pull out a result.

Cahill's presence and contribution in that regard can't be understated and he will he sorely missed but Moyes can at least call on a recognised, goalscoring striker in the form of Jô who was cup tied for the win over Aston Villa. The Brazilian will surely make his second start up front but it's in midfield where the manager has his biggest headache, particularly if he elects to move Phil Neville to right back instead of handing Lars Jacobsen his debut.

In that case, newly-secured protege, Jack Rodwell, Dan Gosling, Mikel Arteta Segundo Castillo, and Andy van der Meyde would be the only five senior midfield players available but Victor Anichebe offers an outlet wide on the right and that will probably keep the Dutchman on the bench. 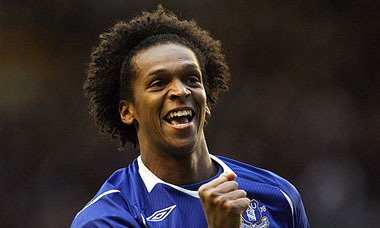 The lack of bite in the center of the park may tip Moyes towards playing Jacobsen at right back and keeping Neville in the middle but his back four will likely be otherwise unchanged.

Louis Saha is fit again but lacking match sharpness and Moyes is understandably reluctant to rush his return after a long layoff with a hamstring injury. The Frenchman will probably start on the bench.

Newcastle, who have been erratic all season long and will be under assistant manager Chris Hughton's control as Joe Kinnear recovers from triple heart bypass surgery, are hoping that Obafemi Martins can play some part, while winger Jonas Gutierrez returns.

Given Everton's terrific away record and recent form, they will be confident of coming away with a good result from St James Park but the Magpies, despite their inconsistency, have a talented squad so this will not be an easy game.

Victory would help consolidate 6th place, though, and enable the Blues to capitalize on any slip-ups by the teams above them as we enter a crucial stage of the season.