James McFadden got a good reception back at Goodison, with Lee Carsley on the bench.  David Moyes named a fairly strong team but only Saha as a recognized striker.  James Vaughan returned to the bench from yet another interminable lay-off, after going on loan to Derby and getting injured again, almost immediately.

Everton got off to a storming start in this must-win game, Bilyaletdinov hammering in an early goal off an excellent chest down from Saha off a throw-in.  Saha made it two inside 10 minutes but it was atrociously denied when the linesman flagged incorrectly for offside.

Cahill came so close with a fabulous shot and Fellaini was next as Everton swarmed forward with attack after attack. Osman smacked in a great shot that was blocked. But the second would not come.

But the first Birmingham attack and Birmingham scored, Everton didn't defend well, no-one picking up Larsen and he hammered it in off the post: advantage of an early goal squandered yet again!

After the equaliser, Everton lost their confidence while Brum gained theirs and much more even game ensued until half-time.

Everton struggled to impose any kind of control on the game after the break.  Subs were finally made with 20 mins left: McFadden replaced by Johnson and Bilyaletdinov replaced by Yakubu.

Saha came close with a header but could not finish. The game was summarized by Osman, going for goal in the last minute, firing wide and almost hitting the corner flag.  Osman was replaced by James Vaughan for stoppage time. But it was not to be: another must-win game... not won.

In what has unquestionably been a frustrating season so far, Everton have dropped an inordinate number of points to teams they really should be beating. Just two points from 18 in the matches against Wolves, Stoke, Hull, Bolton, Burnley and Fulham speaks volumes for the Blues' form in a campaign wrecked by crises of injury and confidence.

Now, sitting just one point above the relegation zone but with confidence returning on the back of morale-boosting performances against Liverpool, AEK Athens, Tottenham and Chelsea, David Moyes's side have a real opportunity to make up some ground on the top half of the table with their three next games.

In seasons past, matches against Birmingham City, Sunderland and Burnley might be deemed "easily winnable" games but perhaps only the home game on 28th December against Owen Coyle's Clarets could fit that description, if only given their poor away record; no one fancies visiting the Stadium of Light these days and Birmingham, this weekend's visitors to Goodison

On Boxing Day they visit the Stadium of Light to face Sunderland before hosting Burnley in their last match of 2009 but, first they play Birmingham City this weekend, a team that is now unbeaten in eight matches and who have won five Premier League games on the bounce.

Alex McLeish's men, ex-Blues James McFadden, Lee Carsley and all, are flying right now and they will be brimming with confidence against an Everton side that still hasn't won on home turf since mid-September.

Moyes, of couse, has yet another injury with which to deal after Jack Rodwell limped out of Thursday's defeat to BATE Borisov with a hamstring injury. The midfielder is officially listed as doubtful but, given the failed attempts to press Sylvain Distin and Joseph Yobo back into action too soon with the same injury in the last month, it would be unthinkable for him to play any part this weekend.

Indeed, there's little need given the fact that the manager has options in midfield where he had precious few in defence where Distin and Yobo were concerned. Tim Cahill returns from a one-match suspension and Leon Osman came through an hour against BATE with no ill-effects after recovering from a foot injury and it would not be surprising to see Moyes's loyalty to him tip the scales in his favour at the expense of the off-form Diniyar Bilyaletdinov this weekend. 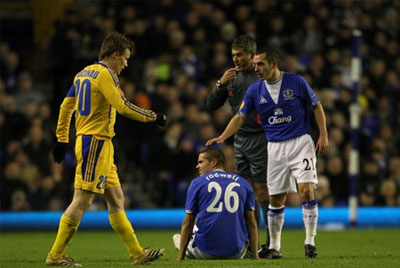 Jack Rodwell: surely ruled out with a hamstring strain

At the back, it's likely to be Lucas Neill and John Heitinga in central defence and then a choice between Tony Hibbert and Seamus Coleman for the right-back slot.

Perhaps the biggest question will be whether Moyes has the courage or the conviction to play two up front again given the success of that formation at Stamford Bridge last Saturday. Louis Saha and Jo started that game but sat out in midweek while Yakubu had an unproductive run-out, but if the Brazilian is fit, the manager has the option of fielding that strike partnership again.