But  in less than 10 mins a goal conceded through poor defending, a good save form Howard off Altidore not enough to prevent Stephen Hunt from hammering home the rebound.

After a few more free-kicks given away, Andy Dawson curled in a second over the defensive wall from another on 18 mins.  So much for 4-4-2!

Everton tried to get into the game with a corner put in well from Baines and Distin got in a header but it was off-target.  But Hull were soon three up, Marny's shot taking a wicked deflection... 3-0!!!  More poor defending...

Things improved marginally in the second half, with Yakubu departing in favour of Dan Gosling and a driven cross from Heitinga soon resulting in an own-goal from Zayette.  Jo then came on in place of Jack Rodwell, who was not having a great game.

After a vital interception by Yobo on Giovanni, a break saw Cahill play in Saha who was fouled by Zayette, who was booked ; penalty.  Saha smashed it home, sending the keeper the wrong way... 3-2 and GAME ON!

Far better stuff from Everton, with the passing actually finding blue shirts for a change.  Plenty more chances and 4 mins of added time but the scoreline remained and another 3 points squandered.

Everton embark on a three-match series on Wednesday that could have enormous ramifications for their season, offering David Moyes's struggling charges the chance to apply the defibrillators to a flagging season.

The Blues travel to the KC Stadium to face Hull City in midweek, face off-form Liverpool at Goodison Park on Sunday, and then travel to AEK Athens next Wednesday where victory would give them one foot in the next phase of the Uefa Europa League following consecutive defeats to Benfica.

Having won just once in their last nine outings, Everton badly need the moral boost that victory would bring and Moyes will be hoping that the imminent return of Steven Pienaar after 8 weeks out and the visit to a ground on which his side have already won handsomely this season — the Blues beat an admittedly under-strength Hull side 4-0 in the Carling Cup two months ago — will give them the confidence to get the job done.

Pienaar has been on the sidelines since the game that followed that League Cup win over Hull. He badly injured his knee in an ugly collision with compatriot Aaron Mokoena and although it seemed he would return fairly quickly, it's been a long wait for a player whose importance to the team has been underscored in the run of results since.

Everton have won just twice in his absence, a come-from-behind victory over BATE Borisov and the 2-1 win at West Ham two and a half weeks ago. His manager is cautiously optimistic that he will be able to play some part either at Hull or on Sunday against Liverpool after Pienaar returned to full training this week. If he is to figure at the KC Stadium, it's likely to be as a substitute.

One player who won't be playing is Phil Neville after he was forced to finally undergo surgery on a cartilage tear that he sustained at Fulham in mid-September. He now faces an additional three-week lay-off and if Pienaar is not passed fit, Moyes will have something of a selection headache in midfield if he wants to play 4-5-1 because Marouane Fellaini is suspended after picking up his fifth yellow card of the campaign at Old Trafford on Saturday.

With Diniyar Bilyaletdinov serving the third and final game of his suspension and Leon Osman is still not yet ready to return from an ankle injury. That may force Moyes to go with the formation that many fans now want to see used, namely a 4-4-2 line-up spear-headed by Louis Saha and Yakubu. The pair looked lively, albeit starved for service where it mattered, against Manchester United and Hull may be the ideal opposition against which to give a more attacking approach a try. 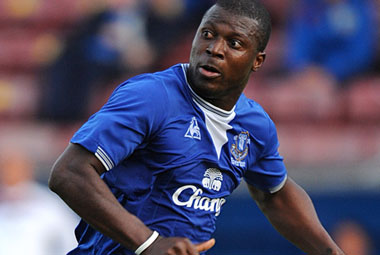 Yakubu: scored his only goal of the season so far against Hull in the League Cup

So, no prospect of young Jack Rodwell getting a well-deserved rest. He will almost certainly play alongside Johnny Heitinga, Tim Cahill, and, possibly, Dan Gosling. At the back, assuming Lucas Neill isn't drafted into midfield, the Blues will probably be unchanged.

The Tigers will be without the suspended Bernard Mendy so Paul McShane will deputise at right back, while Seyi Olofinjana is a big doubt with a hamstring injury. Goalkeeper Boaz Myhill is also questionable but will probably play.

A win would, depending on how Fulham do in the other Premier League fixture, lift the Blues into 10th in the table and leave them four points off fourth place. That's a far better position that the team's performance this season might suggest but it will mean nothing without a sustained run of good results to keep them in the right half of the Premier League.