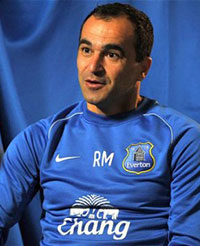 Roberto Martinez has highlighted the vital role that Everton's raucous home support can play when they're on song and has called upon supporters to match the atmosphere of the Arsenal game when Crystal Palace visit this evening.

Three of the Blues' remaining five games are at Goodison Park and with home advantage proving so important this season — Everton have lost just once on home turf this campaign — that could be a huge factor in whether the club realises the dream of Champions League qualification.

Arsenal reclaimed fourth spot with victory over West Ham last night but Martinez's men can take it back again with a win over Tony Pulis' much-improved Eagles.

Martinez is wary of the threat posed by Palace, who have pulled themselves clear of the relegation zone since the teams last met with an impressive run of form.

“You are not going to get a better defensive set-up in the Barclays Premier League than Crystal Palace," the Catalan says. “We all know the threat they carry on the counter-attack and from dead-ball situations and the strategy work they do."

Having orchestrated a seven-match winning run, four of those coming at home, Martinez is fully aware of the shot in the arm his players get when Goodison is rocking under the floodlights.

“We need to get the balance right in getting a clear picture, like the atmosphere we created against Arsenal," he says. "We are the most fortunate team in the league in terms of home games.

“[I]t is just an internal feeling about Goodison. As a player at Everton you can feel your crowd and that makes you run an extra yard and run that yard quicker, and you don't get tired.

“And then you have the opposite side as an away player. You feel that chemistry between the home fans and home players, it can be intimidating and you find it hard to express yourself as a footballer.

“In the same way, that feeling can work against us if we take games for granted and are thinking we just need to turn up and we will win games. So, it is a double-edged sword."


Ian Jones
579 Posted 16/04/2014 at 07:03:53
The support is vital. I have been an Everton supporter all my life, about 50 years now. My Mum, a football mad Everton fan, was born in Wallasey and would have been 80 years old today. Sadly she passed away nearly two years ago. She had previously suffered a stroke after the Everton Man Utd FA Cup semi final penalty shoot out a few years ago. The tension got to her. Who can imagine what pressure the players and managers must experience.

I have never been a fan of Palace, for no apparent reason, other than watching Palace Youth team beat us in late 1970s in Youth Cup final and would have been more than happy to see them relegated this year.

However I went to the Palace Everton game this season and the Palace support were magnificent. They sang and cheered their team throughout. Their fans deserve to be in the Prem.

Everton supporters need to do the same if only to prove my Mum wrong. As our Chairman suggested last year you don’t want to upset Liverpool Mums....

This went on for about an hour. Let's get the old girl rocking!!! Sing yer heart out blues!!!

I thought there was one or two nervous performances at the SOL and it wasn't the younger players who were looking shaky. Palace will be testing those nerves to the max again tonight.
Robbie would be better concentrating on relaxing the players and letting the fans worry about the atmosphere.

Palace wont make this easy, the crowd may have to be
patient. The last thing the players want is for the crowd to start showing signs of tension.

This could be a long night. Everyone one wants this so badly. but we don't have to win it in the first ten minutes