In Search of George Brewster

When I was asked for assistance by a fellow historian to find out what became of a former captain of Everton, I set off, armed with the information he had supplied, in the direction of Wigan. The last resting place of the man I was to search for was that of George Brewster and also to find out the year of his death because it was missing from the records of both Everton FC and the Scottish FA. I had not been aware, as my train drew slowly in to Wigan North West Station, that I had just passed within 100 yards of the spot that, eventually, was to be my final destination. This turned out to be Westwood Cemetery at Ince-in Makerfield.

I had to make a short walk, after alighting from the bus, back across the West Coast railway line, to reach the cemetery gates where, luckily, I met two of the local council workers who were having their lunch break. I had been informed of the plot and the grave number, so this made it easy for them, kindly, to take me to the correct location where I took this photograph that verified that this was indeed the final resting place of the man I was looking for. 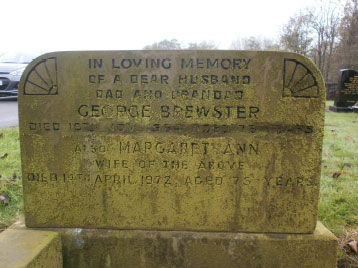 George” Dod” Brewster was born on the 7th of October 1891, in a small rural community known as the “Kirkton of Logie Buchan” which lies several miles to the north of the Granite City of Aberdeen. Alexander Brewster, his father, was employed there as a Gardener while his mother, born at Crimond, is named Margaret. Their home address is given simply as Auchmacoy.

The 1901 census reveals that the Brewster family were living at Gradholm Street in the Woodside district of Aberdeen and George is listed as the fifth born in a family of eight children. Around 1911 George is reported to be playing football for a leading local junior side called Mugiemoss who appear to be centred on a large paper mill that once stood in this area of the town. Standing well over 6 feet tall, George is soon persuaded to join the playing staff of Aberdeen Football Club and he made his senior debut for them, against Celtic, in February 1913. He then established himself in the Aberdeen first X1 until his football career was interrupted by the outbreak of World War One.

George Brewster enlisted in the army and became a “Sapper” with the Royal Engineers. During his period of training he made guest appearances for both Ayr United and Falkirk and also played for Aberdeen when possible. He was later posted to France where he became one of five sons on active service of Mrs M Brewster who lived at Don Street, Aberdeen. George Brewster served his country well and, in November 1918, he was awarded the Military Medal.

On his return home he recommenced his playing career with Aberdeen where his outstanding play caught the eye of the football scout who covered this area on behalf of Everton. The Merseyside club then approached Brewster with the view to signing him but the big Scotsman was reluctant to leave and it was only after their second attempt, as the New Year approached, that he finally put pen to paper. The fee, a record at the time, was £2,400 of which, it was reported, £500 was paid to Brewster. He then enjoyed the Hogmanay celebrations at home before travelling down to England on the overnight train.

He made his Everton debut on the 3rd of January 1921 against Sheffield Wednesday at Goodison Park. He played another 4 first team games before Everton, who finished in 16th place, ended the season. He did however, during this period, win his one international cap for Scotland and helped them to beat England at Hampden Park by 3 goals to 0.

During the summer months Brewster found himself a home at 58, Briardale Road in the Mossley Hill area of Liverpool while Everton signed John McDonald from Airdrie. They made him club captain while George Brewster was made sub-captain. George then took part in the opening game of season and scored his first goal as Everton beat Manchester United by 5 goals to 0. The season however, did not go well for them and they failed to register a win from 8th of October until they beat Sunderland on Boxing Day. Brewster struggled to find his true form and, when he was called upon to captain the side, struggled to cope with the responsibility. Everton flirted with relegation during the rest of the season and finished third from bottom of the league. Their problems were further compounded by the fact that main rivals, Liverpool, had finished the season as champions.

Nevertheless, life was not all dull for George Brewster for he had now fallen for the charms of a Liverpool Lass by the name of Margaret Ann French who lived, in the shadow of Goodison Park at Smeaton Street in Kirkdale. The couple were married at the church of St Frances-de-Sales. Their first son William was born soon afterwards and the record of his baptism, which took place St Frances-de-Sales, lets us know that the family had taken up residence, at 151 Bedford Road, in Bootle. The Brewsters, while residing at this address, had a second son to whom they gave the name of Fredrick.

George Brewster, as he began his third season with Everton, was still not living up expectations and the club executive was not happy with the situation. The following article, which gave credence to this fact, appeared in a Scottish newspaper...

The report had gained currency that George Brewster, who went to Everton 2 years ago, is likely to return to Aberdeen. Brewster has not been appearing regularly in the Everton first X1 of late, and it has been common knowledge for some time that he has been desirous of a change, and wishes to return to Scotland. (Aberdeen Journal, 16-4-1922.)

Brewster played his final game for Everton on the 16th of September 1922 against Blackburn Rovers at Ewood Park where a disaster occurred. The visitors, with the score standing at 1-1, conceded 4 late goals, all of them scored by John McIntyre in a period of five minutes to lose by 5 goals to 1. In November George Brewster left Everton and the news of his transfer was recorded in a Scottish newspaper…

George Brewster, the captain of Everton, has been transferred to Wolverhampton Wanderers at a fee that is a record for the latter club. (Dundee Evening Telegraph 6-4-1922.)

The Midland club were languishing near the foot of the table and George Brewster, despite his best efforts, could not prevent them from being relegated to the Third Division. He was not retained by them and began to play non-league Football.

George Brewster first of all played for Lovalls Athletic who were members of the Western League. They were formed by the management of a sweet factory that was based at Newport in South Wales. The Brewster family remained in Monmouthshire for one season before moving back to Liverpool where they took up residence in Smeaton Street. George then signed for a club that were the latest addition to the Merseyside non-league scene. Wallasey United had been formed following the break up New Brighton FC and they took over their former playing pitch inside the Tower Grounds at the Wirral seaside resort. They became members of the Cheshire County League where they competed against such clubs as Altrincham, Runcorn and Northwich Victoria.

The new club, nevertheless, lasted just one season before they disbanded but George Brewster, just prior to this, had accepted a coaching job in America with Brooklyn Wanderers. He remained in the States until June, playing six matches, and then returned to his native Scotland in time for the 1924-25 football season where a new job awaited him

Highland League outfit Inverness Caledonian had, for the last four seasons, seen their neighbours, Clachnacuddin, win the championship and they had become very much the “second best” club in the city. They turned to George Brewster for help. The club found him a job in a local wool mill and appointed him player/manager. They also put him in charge of training the team. The next season, under the guidance of Brewster, Inverness Caledonian were crowned Highland League champions.

He remained with the club for the rest of his playing career and later became a prominent member of the committee. The Brewster family, with the advent of World War Two, returned to Lancashire for reasons which are as yet unclear. The best possible explanation could be the desperate need for workers at the new Royal Ordinance Factory that straddled the West Coast mainline between Leyland and Chorley. The site was eventually developed in to an enormous weapon-making complex which, at is peak, employed over 28,000 people. It was, at the time, the largest employer of labour in Britain. Maybe the Brewster family worked here and remained in the area when the conflict ended.

The 1956 voters list tells us that George and Margaret were now living at 19 Chorley Street, in Ince–in- Makerfield on the south side of Wigan. Their two sons, William and Frederick, were still living with them. However, ten years later, the two boys have left the house and the couple lived there alone. George Brewster a former captain of Everton Football Club, died in Wigan on the 18th of November, 1964. 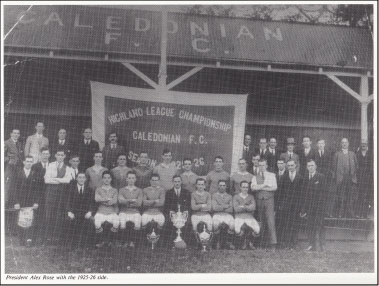 George Brewster, centre, back row, with his Caley team mates.

Thanks for the research.