Everton insist “nothing imminent” regarding Eto'o 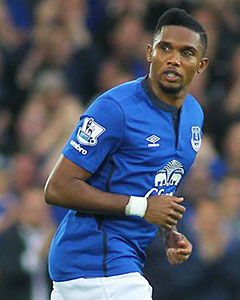 Samuel Eto'o's move to Sampdoria remains in the balance after Roberto Martinez reiterated that Everton will likely take until the end of the transfer window to decide the player's future.

The Cameroonian's move back to Serie A appeared to be close to completion after he struck an agreement with the Italian club last week. Comments by his agent, Claudio Vigorelli, last week and from both Sampdoria's director of sport, Carlo Osti, and president, Massimo Ferrero, over the weekend served to confirm that the formality of a medical was the last step in concluding a deal involving a nominal £1m fee to Everton.

Everton appear to be blocking the transfer, however, perhaps because Martinez is hopeful of persuading the veteran striker to stay or because he is looking to have a replacement lined up before he will sanction the move.

Vigorelli told Italian media that his client "[has] chosen Genoa and he's really motivated. In the last few hours, an offer arrived from Santos, which was greater from a financial viewpoint, but he isn't interested in it."

Osti told Telenord, meanwhile, that “Eto'o should be in Genoa on Tuesday,” where he was expected to undergo a medical.

Ferrero meanwhile told reporters that, “Eto'o will arrive and he will score many goals. The Everton President will soon give us the all-clear.”

That consent has thus far not been forthcoming from Bill Kenwright and Eto'o remains a Blues player even if he is not in the line-up at the moment. The 33 year-old was seen at Goodison Park for last night's draw with West Bromwich Albion but is not playing while there is interest in his services from other clubs.

"The Samuel Eto'o situation is something that we're going to make sure that the next two weeks is a period of reflection and see what's the next move in that respect," Martinez told evertonfc.com. "[By the end of the window] we'll find out one way or another if Samuel is part of Everton going forward or not and we'll announce it [if there's anything to say]."

Ferrero remains hopeful, though, telling Rai Sport: "We are working hard [on the deal] and I am in close contact with the [Everton] coach.”

Unless a player is moving imminently (ie 48 hours or so), he should be in the squad if fit to play.

At this rate we will pay Eto'o for the whole month of January while he twidles his thumbs.

Crazy behaviour by our club

Meanwhile, we continue to pay his wages and he isnÃ‚’t available to play. Amateur hour open 24/7 at Goodison.

Will Firstbrook
16 Posted 21/01/2015 at 13:35:05
Management posturing as if they are in control of the situation here. Please.
Will Firstbrook
17 Posted 21/01/2015 at 13:40:49
Eto'o has ruled himself out of matches of late claiming not to be in the 'right mind' to contribute. Bobby could use the same excuse if he wanted - nobody would question it.
Conor McCourt
18 Posted 21/01/2015 at 15:42:14
It looks to me that they want Eto'o out but have another target which may not be in his position. I just hope its a winger or a centre back. Even if this useless board don't release funds I hope that they will at least sanction a loan or two.

What is the point of having 3 left backs in the club when we have only had 2 wingers in the squad for nearly all the season?? I hope his statement about going with what we've got is designed at putting a bit of pressure on these money pinching idiots above him.