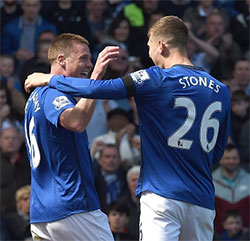 James McCarthy and John Stones scored the goals that put Everton into an unassailable lead by half time.
(PAUL ELLIS/AFP/Getty Images)

Everton recorded a third successive home win and their biggest margin of victory over Manchester United since 1992 with a thumping 3-0 win in the sunshine at Goodison Park.

The Blues carried out the kind of masterful game-plan of containment and pace on the break that brought similar victories over the likes of Arsenal last season, roaring into an early lead through James McCarthy and then doubling their advantage later in the first half when John Stones headed in his first Everton goal from a corner.

With United continuing to be frustrated in their attempts to get back into the match, Martinez introduced Kevin Mirallas for Leon Osman with 22 minutes to go and the Belgian took just six minutes to wrap things up with a typically composed one-on-one finish.

Along with the return of Romelu Lukaku, Osman was one of two changes for Everton as Martinez opted for the veteran's experience and defensive ability but it was McCarthy who raced forward in the fifth minute after sending a ball wide for Seamus Coleman, collected it after it came off the heel of Paddy McNair and then evaded two red jerseys before slotting past David de Gea.

It was the perfect start for the Blues in the face of what would be concerted pressure from Louis van Gaal's men. Everton maintained their shape and focus, however, to consistently frustrate United and the returning Marouane Fellaini who flashed a shot narrowly over in the seventh minute and then picked up a booking for hacking down Ross Barkley.

A good move from the visitors gave Daley Blind a sight of goal but he fired straight at Tim Howard and the American, enjoying a good performance against old side, came off his line smartly a few minutes later to deny Luke Shaw.

Everton increased their lead from the third of three successive Leighton Baines corners, though, 10 minutes before the break. The young defender rose superbly to glance Baines' in-swinging set-piece under the crossbar and Ashley Young on the goal line was unable to prevent it from flying into the net.

Predictably, United began the second half on the front foot and more impressively proactive work by Howard to charge down Wayne Rooney's denied the former when he Blue popped up unmarked on the far side of the area three minutes after the restart.

It was a rare opportunity for the visitors, however, as Everton defended dilligently and kept them at arm's length while always posing a threat on the counter-attack. A handful of decent chances to put the game to bed on the break went begging as Lukaku fizzed a tempting cross across the face of De Gea''s goal, Barkley shot weakly at the 'keeper when he slipped mid-shot and Seamus Coleman's cross was put behind by Chris Smalling but the third and final goal eventually came with a quarter of an hour to go.

Barkley chipped a ball over the top looking for Lukaku who was obviously offside but while he sensibly left it, Mirallas ran in from an onside position and capitalised on acres of space in the static opposition defence to stroke it past the 'keeper and make it 3-0.

The substitute almost made it four in the closing stages but he was foiled by De Gea who palmed his excellent shot over the bar before the Blues comfortably saw out the final few minutes to secure a handsome win that lifts them back into the top half of the table for the first time since November.