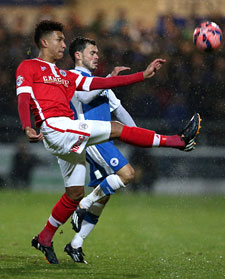 (Jan Kruger/Getty Images)
Everton have announced the acquisition of Mason Holgate from Barnsley in a deal that could ultimately be worth Ł1m to the Yorkshire club.

The 18-year-old defender passed a medical and agreed personal terms yesterday and put pen to paper on a five-year contract.

Holgate, who can operate at centre half or right back, spent a time training with Manchester United this summer as they followed up their own interest in him but the Blues have now secured a player whom the boss is happy to have on board.

“With Mason, an opportunity came up and we didn’t want to lose out,” Roberto Martinez said.

“He is a young man with a very impressive future. His development is going to be important and it will be interesting to see how quickly he can have an impact on the first-team.

“But he is not a player who I would expect to perform straightaway in the Premier League - that would be very unfair."

Like John Stones, another signing that Everton brought in from the Tykes, Holgate joined Barnsley aged just eight and has come through their youth ranks where the emphasis for centre-halves is on the passing football that Martinez has established at Goodison Park.

BBC Sheffield Sports Editor, Andy Giddings, was asked about Holgate whom he described as “a technically gifted centre-half in the mould of the modern day CB who looks comfortable in possession.”


Victor Jones
1 Posted 13/08/2015 at 15:49:48
Nice to get someone on board. But strange to see Luke Garbutt go out on loan. Let's hope that this lad turns out to be as good as Stones. And lets hope that his "impressive future" will be with Everton. We could have a very promising young defence in a few years time. Browning. Galloway. Holgate. Garbutt. Whats the odds. We now need a top class goalkeeper to command his box. Looks like Stones will be going. But please, lets not bring in journeymen players, just looking for a last payday. If the youngsters are good enough. Then play them.
Ajay Gopal
2 Posted 13/08/2015 at 16:01:29
Intriguing - what Martinez is trying to do. We have potentially 4 of the best young English central defenders in the game today - Stones, Galloway, Browning, Holgate. When Jags is ready to hang up his boots, we could have Galloway or Browning or Holgate ready to step in. And then we have a few from the U-21 who are trying to break through. All very rosy (theoretically) for Everton, BUT 2-3 years down the road. The question is - for the NOW, do we have enough depth in defence? I think Johnny Evans would be a good addition to the squad and would support that move. If that happens, then it might be worthwhile to farm out either of Browning or Holgate on loan to a Championship club.
Philip Bunting
5 Posted 13/08/2015 at 16:52:14
Victor jones....why do you say Stones is going? Sick to death of reading fans telling us hes going. The fact is you don't know so why add or state unless its a known fact. Youre only adding fuel to the rumours and thats all they are, idle gossip.
Alex Parr
6 Posted 13/08/2015 at 17:04:49
Good choice Mason. Welcome to the club. Heres to a long and exciting career at Goodison mate.
David Donnellan
7 Posted 13/08/2015 at 17:10:11
Gotta be happy with this signing, especially if he lives up to the potential they see in him. I hope he succeeds!

Just turned off the radio, Durham & Gough the latest monkeys championing a move for Stones to Chelsea. Apparently Everton are hypocrites by signing this kid from Barnsley, allowing him to make the step up, but we won't allow Stones to make the step up to Chelsea. Pair of cretins, not really a fair comparison, this kid has come from league 1, ffs! Everton play in the same league as Chelsea last time I looked!

Drew Shortis
8 Posted 13/08/2015 at 17:11:23
Potentially a very wise investment for the future, especially if he can follow in Stones footsteps. I completely agree with Martinez's policy for the future. Stones, Browning, Holgate, Galloway and Garbutt (Moyes signing but new contract under RM) are all very promising defenders and in a few years time we could have one of the best home grown defences in the league. This is definitely a very sound strategy for a club with limited resources and its good to see young players view Everton as the place to go. Best of luck to you Mason!
Victor Jones
9 Posted 13/08/2015 at 17:35:51
I would love Stones to stay at Everton. Believe me. But the nature of the beast is that when the right money is offered, Stones will go. I just hope that Martinez can spend his transfer kitty wisely. Only I wouldn't hold my breath on that happening.

Until we get new owners, and a new direction and ambition, we will always be selling our Rooneys and John Stones. I hate that. But it is a sad truth.

I can see what Martinez is doing and if these youngsters turn out how we hope they will then that will be brilliant.

Let's hope we can get some good results against Saints,City and Spurs so when the new arrivals come we will then be stronger as a squad and push on from there, I am trying to be positive as is been frustrating times so far but we need to get behind the team and manager and just wait and see were it takes us.
Jamie Tulacz
12 Posted 13/08/2015 at 17:59:24
Yes a good long term strategy, but we still need somebody for the here and now!
Keith Harrison
13 Posted 13/08/2015 at 18:01:50
Roberto has stated today that Stones will not be going. Can we just accept this please and stop trying to have the lad sold in your own minds. The reason I believe the club have not stated categorically that he is not for sale is because EVERY player has a price. If that Chelsea clown came calling with a £55 mill bid, I would shake his hand and carry JS there on my back. Welcome to the club Mason, and lets hope similar speculation is surrounding you in a couple of years time lad.
Colin Glassar
14 Posted 13/08/2015 at 18:07:44
We won't hear of this kid now until next season at least so let's give him time to settle down. I'd lend him back to Barnsley for the season.
Keith Harrison
15 Posted 13/08/2015 at 19:03:41
What else is in the pipeline Colin, or is Madre the word for the moment? Miss you on the OF too pal.
Paul Ellam
16 Posted 13/08/2015 at 19:24:53
Chuffed. I have friends who are Barnsley fans and while they don't think he is as good as Stones they do think we have got a cracking little player on our books now.
I also would loan him back to them for the season - as a kind of thank you as well as to get him game time.

Joe Foster
21 Posted 13/08/2015 at 21:01:28
Keith you should ask him round for Xmas dinner as well
Chris Kelly
23 Posted 13/08/2015 at 22:21:00
A good signing, we hope. Agree david#4 we should not be a feeder team to Chelsea or any other of the nouveau Riche. They may have more cash and indeed play champions league but sorry pundits they do not have the best record for developing talent. Just look at the you germs Chelsea, Man City have let bought, sat on the bench...if they are lucky and then get loaned out or sold out. Maybe if the kids world class they may get a bite but most don't. Terry may be a good defender but I would say jags is the better man...if you get my drift in terms of passing down to the next generation.
Abhishek Saha
24 Posted 14/08/2015 at 04:34:19
Investment for the future always delivers the goods (be it money or good players) if done in the right fashion and if Stones, Galloway, Browning are any kind of a track record then no reason why we shouldn't be doing this. So good signing!!

I like the idea of Barnsley being a feeder club... get our youngsters playing there on loan.... buy some of their talent when ready for the step up at a good price with a healthy sell on clause... win-win.

Poor decision for the penalty though but that will come with experience.

He appears to have all the tools.

Still, let's hope RM is in charge while he is ill and Stones won't be going anywhere.

Sandra Williams
46 Posted 19/08/2015 at 21:24:12
Was Jose there tonight waiting to bid for anyone in Blue? Wouldn't put it past him and his classless cronies. And can we keep it quiet re Holgate, otherwise he'll be gone by friday! (don't you know 'they' are monitoring our every word?!)
Trevor Lynes
47 Posted 19/08/2015 at 21:24:55
Fully agree about Holgate, he was our best player by miles and he is only 18 years old playing with lads in their 20s. He seems really comfortable on his right side so could be an able deputy for Coleman. The kid also looks comfortable on the ball so could well play defensive midfield.

Just wish we could find someone who could play up front as the general ball control apart from in defence was pretty average.We seem to have an absolute abundance of defenders but no one is coming through as an attacking midfielder or ball player. :(