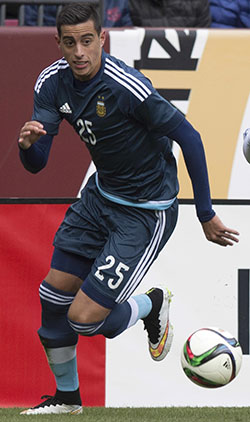 Everton went from elation to exasperation at the Vitality Stadium as they twice threw away a precious lead and had to settle for a point following Junior Stanislas's second equaliser deep into disrupted stoppage time.

The Blues were in a comfortable position heading into the last 10 minutes of their first ever League encounter at Dean Court thanks to Ramiro Funes Mori's first goal for the club and Romelu Lukaku's 12th of the season.

The Argentine defender had risen impressively to meet a 25th-minute corner before powering a header that ex-Bue Sylvain Distin couldn't keep out under the crossbar to notch Everton's first set-piece goal of the 2014-15 campaign.

Lukaku doubled the lead 11 minutes later, latching onto Gerard Deulofeu's early ball around the fullback and then rifling a right-foot shot inside the near post.

Perhaps with one eye on Tuesday's League Cup tie at Middlesbrough, Roberto Martinez's side sat back in the second half, ceding more than 65% of the possession to their hosts and though Lukaku had a great chance to extend the lead but couldn't connect with a right-wing cross, they paid the price initially for not killing the game off.

Poor defending from an 80th-minute corner where Arouna Kone and Deulofeu left space for Adam Smith to line up a shot from 25 yards ended with the Bournemouth man smashing an unerring strike in off the post with Tim Howard helplessly looking on.

Then, with less than three minutes of the regulation 90 remaining, a quick free kick in midfield led to a cross from the Cherries' right that found Stanislas who gleefully converted with a first-time, side-foot shot.

Not to be denied, though, Everton grabbed what looked to be the winner in the fifth minute of added time. Seamus Coleman lost the ball under his feet with a crowd of red and black shirts around him but it broke to Barkley who screwed an effort goalwards that skidded in off the goalkeeper's foot.

That should have been that but after stoppage time dragged through another three minutes as jubilant Everton fans were cleared from the pitch and Martinez withdrew Arouna Kone in favour of Darron Gibson, Bournemouth scored straight from the restart. Again the ball went down the flank and Charlie Daniels' cross from the left picked out Stanislas who bulleted a header past Howard to stun the visitors.

The result extends Everton's unbeaten run to five games but it represented a lost opportunity to gain ground on the clubs chasing a spot in the top four and will hopefully serve as a harsh lesson to be heeded for Martinez's men.