by Lyndon Lloyd | 03/12/2015  [Jump to last]
Matty Foulds won't officially sign until next month but the 17-year-old defensive prospect is already getting to know his future home.

Everton recently agreed a fee with Bury that is officially undisclosed but is reported by the Liverpool Echo to be around Ł225,000 for Foulds, beating off plenty of competition from rival clubs in the process, and will complete the transfer when the window opens at the start of January.

Bury manager David Flitcroft, who oversaw John Stones's initial development at Barnsley, explained that Roberto Martinez and the draw of the Toffees were big factors in the central defender's final decision.

"[T]here are quite a few clubs interested,” Flitcroft told the Bury Times, “Everton really sort of drove the bidding war and wanted him.

“Once the player knows and understands that a club like Everton and particularly Roberto (Martinez) wants him, once he spoke to Roberto about his pathway and his development there was no holding him back and it’s a fantastic deal for the club. It’s a good deal all round and I’m delighted for the kid.

"I have spoke to him since and he has gone in at Everton and he is quite enjoying it. 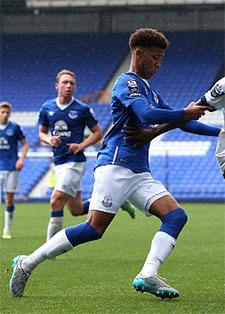 “The club has acted very well in protecting the interests of Matty Foulds and I’m really plotting his career and rooting for the kid because he could be a fantastic player.”

Foulds will become the latest promising centre half to join the Blues' Finch Farm Academy, following in the footsteps of Stones, Brendan Galloway and Mason Holgate. Holgate arrived in mid-August, also from Barnsley and he has revealed that the "Martinez effect" was crucial in his decision to choose Everton over Bournemouth as well.

“As soon as you speak to [the gaffer], you just know," the 19-year-old told the Echo. “I’m only young but it felt like some of the managers didn’t know a lot about me, they were asking what my position was but Roberto rang me and he knew everything.”

“It just happened really fast,” he continued in reference to the day he agreed to join Everton. “I was on my way to Bournemouth and it was then that I first heard about Everton’s interest.

“But he rang me as I was going down and so I turned the car around. We were by Birmingham on the motorway and just turned around.”

Nice to see an Everton manager held in high regard by others.

Les Martin
4 Posted 03/12/2015 at 20:09:51
Players like this are of very little risk financially and the rewards of seeing a player progress as per John Stones are so rewarding.

He is a left footed centre half and looks tough and ready to fill out, I hope he developes as hoped and could be another gem. It appears that Everton scouts are doing a fantastic job, with Galloway already established, Garbutt, Holgate, Foulds and home grown Browning, we could have quite a defence of young talented players.

Massive statement by Colin there to claim the kid will be better than Stones too!

Can't see it to be honest like but if this lad is half the player Stones is I will be delighted.

Keep up the good work, Blues.

Charlie Burnett
9 Posted 04/12/2015 at 10:40:20
All the kids he has signed are young CBs that are calm as hell on the ball, for example, the next Stones. All involved with the English national upbringing; I think they have all represented England at younger ages.

It's good to think players are respecting our manager when he calls and Roberto has the charm and knowledge to seal deals for the future. I just hope all these players are not tied into contracts with a massive sell-on clauses and that's the reason we are getting them...

I have to say, I like hearing this type of thing.

You would imagine all managers would have (more or less) the same dedication to the job etc, but I remember being quite stunned a few years ago when Sven Goran thingy was at City.

They had just bought someone for a lot of money and he said something along the lines 'We knew... right away... he was a gut player... after we watched... his wideo'

I remember thinking I could probably organise a video of me that made me look alright (certainly harder to knock off the ball than Osman).

The last five or so years Moyes was in charge I found it just about impossible to like or admire anything about the man, but one thing I couldn't deny was his dedication (miserable, imagination-free, predictable, but he was dedicated).

He'd be actually attending games all week in all kinds of hell-holes because he (apparently) wanted to take a 4th look at Grimsby prospect, Wayne Haddock (or whoever).

I can't (and never did) knock that type of effort.

According to Mrs Martinez (if memory serves), Roberto has a two-telly system, built into a corner of the room, so he can watch two games at a time.

Kind of sums up Moyes and Martinez – probably not that much difference in results overall, or dedication to the job, but one of them just has a bit more... imagination.

Still a remarkable statement for anyone to make was more my point.