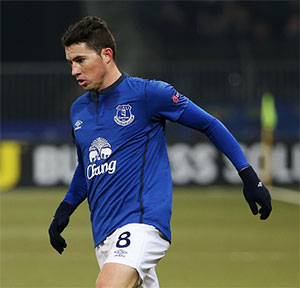 With a new contract signed, Bryan Oviedo is hopeful that two years of injury problems are now behind him so that he can give everything to Everton.

The Costa Rican fullback is enjoying his best spell of form and fitness since he suffered that awful double leg-break at Stevenage in January 2014 and is currently keeping England international, Leighton Baines, out of the starting XI.

It makes a change from the succession of injuries he initially suffered once his fractured leg had fully healed – the 25-year-old picked up a hamstring injury this time last year in the Europa League game at Young Boys and then broke a metatarsal bone in his foot which prematurely ended his 2014-15 campaign – but now he is looking forwards.

"I have felt really good in the last games," Oviedo told the Liverpool Echo. After the games I have been recovering well with no problems. Last week I played three games in seven days with no problem.

“I feel good, and I just want to continue with this. I am happy, and I want to help the team with everything I can do.

“Sometimes it is difficult," he continued, looking back on his lengthy spells on the sidelines. "You don’t want to be injured, of course. Nobody wants that. But you can have bad luck which you can’t do anything about.

“Over the last 18 months or two years, that has been the case for me. But at the moment I feel great.

Oviedo credits the unwavering support from Everton fans and the way in which he feels completely at home at the club for not only helping him through his periods of rehabilitation but also for making the decision to extend his contract an easy one.

The former FC Copenhagen man penned a new three-and-a-half-year deal last week that ties him to Everton until 2019.

“I have been here a long time, and I feel completely at home,” he explained.

“When I go to training, when I go to games, I am always so happy. The atmosphere is nice in every respect, you know? With the staff, with the players, with the fans, it is always great.

“For me, it was an easy decision because of this. I am so happy to stay here."


Rob Hooton
1 Posted 17/02/2016 at 20:18:39
Great to have you back on song, Bryan! The lad was on fire when he broke his leg and at the time I thought he might be even better than Bainesy and that we could afford to take the big money from Man Utd.

Can only be good for us to have them fighting for the left-back spot, we are spoilt for choice in that position for sure.

Actually think that we're a bit over-loaded at left back with 4 good options following Galloway's emergence this season, so may want to shed one at some point (though not Oviedo)?

I've never been at all convinced by Garbutt, and his Fulham loan has been a disaster. His nadir was Tuesday night against Blackburn when he was hauled off in disgrace after 34 minutes and later publicly apologized to the home fans.

Also, I tend to believe Galloway's future is in the center, so I don't think we're overloaded at LB.

Oviedo was poor against WBA when we needed to go forward. We offered nothing down the left all game. He's good defensively but is no Baines overall.

Mike Gaynes
7 Posted 18/02/2016 at 17:22:28
Charles and Clive, no question Bainesy offers more offensively, but I think Oviedo is better defensively at this point. He pressures crosses much more effectively and is a better tackler in the open field.
Jimmy Sørheim
8 Posted 19/02/2016 at 01:15:45
If anyone can remember Garbutt is first and foremost a great swinger of crosses, like he did last season. I think Fulham are playing him out of position, and that he is more of a left-sided midfielder in the making.

He even outshone Baines with his pin-point crosses last season.