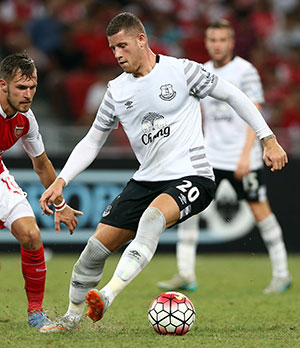 Everton are into the quarter finals of the FA Cup thanks to a 2-0 win at Dean Court behind goals by Ross Barkley and Romelu Lukaku and a tremendous first-half penalty save from Joel Robles.

The Spanish ‘keeper, now first-choice between the posts by right after a series of safe performances in Tim Howard’s recent absence, sprang to his left to push away Charlie Daniels’ first-half penalty to keep things goalless and Everton used the platform to eventually win the game with two strikes in the second half.

Roberto Martinez had named an unchanged line-up from the one that had dominated the game against West Bromwich Albion last weekend but ended up on the losing end of a 1-0 scoreline and they struggled to create clear-cut openings during a choppy opening to the game.

The Toffees had the lion’s share of possession but after a couple of tame efforts from Barkley, it was Lukaku had their best moment of the first period when he accelerated down the left and drove inside but was foiled by Federici’s leg as he tried to flick the ball home.

Bournemouth, meanwhile, had been restricted to shots from distance, one of which Juan Iturbe drove wide and the other King hammered well over, before James McCarthy gifted them an opportunity to break the deadlock with an inexplicable handball in his own box eight minutes before the interval.

Robles came to the rescue, however, and the rebound was hammered into the side-netting prompting celebrations and pumped fists in the away end behind the goal.

Everton improved after the break and after  Aaron Lennon’s had seen a volley deflected behind, Barkley benefited from a decisive slice of fortune when he lined up a curling effort from the edge of the box that clipped Dan Gosling’s boot and looped over the goalkeeper.

Barkley then turned provider for Lukaku as the game opened up but although the Belgian put the ball in the net with a tidy finish, he was narrowly flagged for offside.

That heralded the most important spell of the game for Martinez’s side as Bournemouth stepped up their efforts to find an equaliser, with Eddie Howe introducing more firepower in the form of Matt Richie and then Glenn Murray.

They came very close to equalising when Junior Stanislaus’s heavily-deflected free-kick squirmed a foot past the post with Robles moving in the opposite direction and Gosling lashed an effort into the side-netting from the resulting corner.

Jagielka had to be alert to block Murray’s shot behind for a corner and Gosling had Evertonian hearts in their mouths with a free header from six yards but he planted it straight into Robles’s arms.

Then, after Ritchie had swept King’s cutback wide at one end, Everton carved out a lovely counter-attacking move that eventually led to the killer second goal. McCarthy backheeled neatly into the path of Lennon who shuffled it on to Barkley but his placed effort searching for the inside of the far post took a crucial knick off a defender and behind for a corner.

The resulting dead ball delivery was flicked on impressively by Gareth Barry and arrived on a plate for Lukaku to ram home.

That allowed Martinez to withdraw his two goalscorers, give some minutes to Kevin Mirallas and new signing Oumar Niasse and Everton to see out the contest in professional fashion.

Lukaku for all his supposed strength, just walked around and pointed to where he wanted to be set up without him doing any work. Rom had one run when he skinned the defender for pace. Most of the game, veteran Distin had him in his pocket apart from losing him for Everton's second goal.

Barkley's passing mostly was very poor but for once we got lucky with his deflected shot looping over the cherries keeper. We just don't have that cutting edge to our play in the last third. Bournemouth came more into the game when they realised we were not much threat up front.

Great penalty save from Robles that kept it level and in the end we deserved to go through against an under-strength Bournemouth. We will have to stop this multi passing game with no end-product.