An Everton fan who has raised over Ł27,000 for a local cancer charity by wearing only his swimming trunks at home and away games was invited to Finch Farm to share his remarkable feat with manager Roberto Martinez and the first-team squad on Tuesday.

'Speedo Mick' has become a terrace favourite after braving the elements at Everton games up and down the country, collecting money for Woodlands Hospice in just his royal blue swimming trucks, cap and goggles.

The Blues boss, Duncan Ferguson and the rest of the squad were delighted to hear the tales of his fundraising efforts, with some of the players even trying on the swimming cap and goggles themselves as they congratulated Mick on all of the work he has done over the last few seasons.

“Mick’s a remarkable human being to be able to have that focus on doing such a lot of good work - using the love of his life, Everton, and travelling up and down the country just sends a really strong message to other people and other fans to follow suit," said Martinez.

“It’s been great to welcome him to Finch Farm. We always try to help him as much as we can and it was great to meet him face-to-face and hear about some of his experiences.” 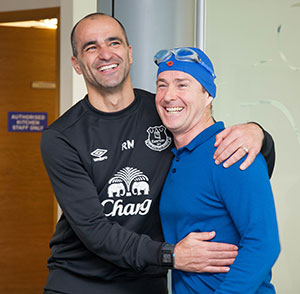 The intrepid fundraiser, real name Michael Cullen, got the idea after swimming the English Channel and he’s gone on to raise his staggering amount by collecting from supporters on matchdays.

He also recently walked from London to Bournemouth before Everton's FA Cup game at Dean Court in just his swimwear.

Woodlands Hospice is an independent charity in North Liverpool that provides specialist palliative care for people with life-limiting illness and Mick chose the charity after a personal experience led him to see the fantastic work they do first-hand.

“Everyone has been absolutely fantastic today, signing my shirts and giving me a big well done," he said. "They’ve been right on board with all of my fundraising, sending me messages on Facebook and Twitter and it’s been a great day meeting them all.

“After I swam the channel, I came up with the idea to turn up at Goodison in my speedos and it’s basically carried on since then. With the support of Everton Football Club and especially the support of the Everton fans and away fans we’re up to over Ł27,000 for Woodlands Hospice, so thank you to everyone for your continued support.”

Despite clearly having a soft heart, this is a proper hard and determined man to do what he does regardless of the temperature.

Every now and then you come across an individual and feel a little bit humble.

Mods, there is no donation link above, would you mind sorting please. Fantastic effort by Mick and all donators. COYB