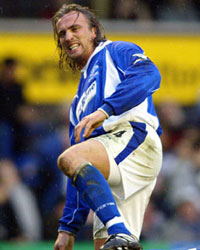 The 49-year-old was participating in a golf competition at the Mapauto Golf Cup near Nice when he suffered the heart attack but was treated at the scene before being airlifted to Princesse-Grace hospital in Monaco where he was initally said to be unconscious but stable.

The ex-player was thought to have regained consciousness following a post from his Twitter account but subsequent reports said he is still in a coma and eventually underwent life-saving surgery.

Ginola played for the Blues briefly in the 2001-02 season, Walter Smith's last season in charge, following successful spells elsewhere in the Premier League with Tottenham Hotspur and Newcastle United.

He made just 7 appearances for the Blues before hanging up his boots and moving into a career in television.

this is his Facebook page if you want to offer support.: https://www.facebook.com/teamginola/

Not trying to put a downer on what is already a downer of course, and wish the guy well. He was a class act at one time, bags of talent and a handsome devil of course.

Nice guy by all accounts too - hopefully he'll be OK long term.

Extremely gifted player. For a couple of seasons arguably the best winger in Europe although competition was stiffer in that era before wing backs or wingers became strikers.

Hope he gets well soon.

Either way, hope he's on the mend.

Just read a journalist claim that the tweet from 'him' making light of it was actually posted by his agent while he was in a coma! Am I alone in thinking, if true, that's pretty fucked up?