James Gourley of Everton and Morton

Looking out from their Ayrshire brae the inhabitants of the former coal mining community of Annbank have an unobscured view of the evening sun as it sets below the horizon on the Firth of Clyde. This prospect may also be enjoyed while they are watching their local junior team playing football in the centre of the village, on Pebble Park.  This location was once graced, however, by a certain local-born man named James Gourley who worked at the local colliery.  His exploits soon caught the eye of the local selectors who chose him to represent Ayrshire, against Edinburgh, at Rugby Park in Kilmarnock.

He was spotted during the game by a scout who persuaded him to sign for Lanarkshire outfit Cambuslang whom he helped to reach the 1888 SFA Cup final but they were beaten 6-1 by Renton. Gourley then won his one and only international cap when he represented Scotland on 10th of March, 1888 against Wales at the Easter Road, home of the Hibernian club in Edinburgh, where he lined up alongside Andrew Hannah and Alex Latta who, in due course, would both play football for Everton. He failed to get on the scoresheet as the home team won by 5 goals to 1. Gourley was by now a married man whose wife bore him several children, one of whom was destined to wear the colours of Everton Football Club. 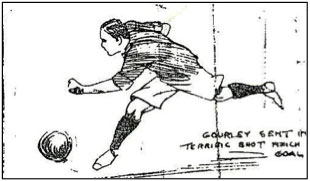 James McCrorie Gourley was born on 11th September, 1888 at Annbank where, after a short education, he followed his father down the coal mine and onto the local football field where it was quickly noted that he had inherited his father's talent for the game. In 1908 he transferred his services to Port Glasgow Athletic who were, at the time, struggling to survive in the 2nd Division of the Scottish League. He remained with the Clydeside club for one season before leaving for what was described as a large fee to join Everton and arrived at Liverpool Exchange Railway Station in August, 1909.

His new employers club then placed him in the care of Mrs Joanna Brown who lived in shadow of Goodison Park at 4 Diane Street. The young Gourley would, no doubt, have marvelled at the gigantic grandstand that had recently been constructed along the Goodison Road side of the Everton ground, bringing its capacity up to over 70,000. Nevertheless, the structure was not quite complete so the club's pre-season practice match took place, with the kind permission of Liverpool Football Club, at Anfield. The young Scotsman took part in the game and was back at the same location one week later.


Gourley made his Everton debut when he represented the club's second X1 against Liverpool in a Lancashire Combination fixture where a crowd of around 10,000 saw him score the goal that earned his side a 1-1 draw. He quickly settled into the side and helped them to finish at the top of league. The first team fixture list, however, was by then becoming congested because they had reached the semi-final stage of the FA Cup where a game against Barnsley at Leeds now awaited them.

Gourley was brought into the squad and made his first team debut on 19th March, 1909 against Chelsea at Goodison Park where he scored the opening goal in a 2-2 draw. Everton drew the tie with Barnsley and were then compelled to play a home game against Bury on the following Easter Monday. Gourley, who replaced Sandy Young, took part in the game and scored one of the goals in a 3-0 win. The following Thursday, with Young back in side, Everton lost the replay 3-0 at Old Trafford, Manchester. James Gourley made two more first team appearances for the first X1 and was retained by the club in readiness for next season. 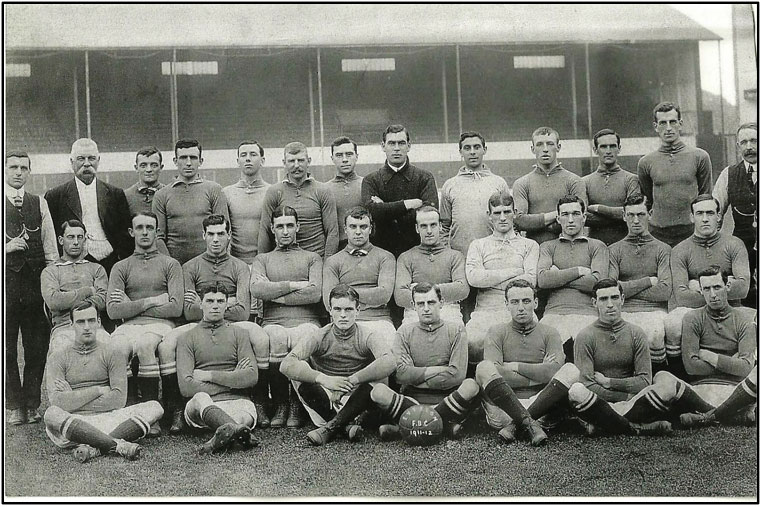 Gourley, third from right centre row, with the Everton team

He featured prominently in the first team line-up during the opening matches of a campaign that saw Everton pipped for the league championship by Blackburn Rovers. He remained a reliable member of the playing squad for the next two seasons while the executive twice refused offers from other clubs who were anxious to obtain his services. Nevertheless, when the club approached Morton FC in the hope of signing their full back John Fulton, the Scottish Club demanded that Gourley be included in the deal. The Everton directorate, who received £500, accepted the terms and the Scot returned to his native land.

He had made 54 first team appearances for Everton and scored 8 goals in the process. He had also left behind some happy moments for the Everton fans to remember him by, the most memorable of which occurred on 16th of September, 1911 in the home match against Liverpool. The score was standing at 1-1 when Gourley scored with a terrific 25-yard drive that settled the game in favour of Everton. His greatest achievement, however, now awaited him back in Scotland with Morton.

The Greenock-based club had recently rebuilt their team and were now considered to be the best Scottish side outside of the Auld Firm in Glasgow. Gourley became a permanent fixture in the Morton team and was 34 years old when the club reached the SFA Cup final. The match, against Rangers, took place at Hampden Park on the 15th of April 1922 before a crowd of 73,681 people. Play had been in progress for eleven minutes when Gourley, following an infringement by the Rangers goalkeeper, became the first man to score a goal directly from a free kick in a Scottish Cup final. It proved to be the only goal of the game and Morton club, who had not been expected to win, lifted the trophy and then celebrated by drinking a bottle of champagne that had been gifted to them by the resident Queens Park club. (This remains today, the only major trophy to be won by Morton Football Club). 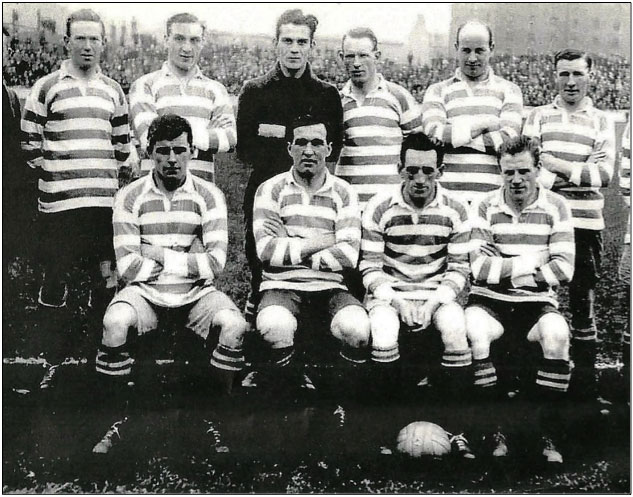 Gourley was 38 years old when he finally left Morton and had a short spell with Third Lanark before retiring from the game to take up a coaching job in Sweden. Since leaving Everton he had played 426 games for the club and had scored no fewer than 125 goals. Gourley had planned for his family to follow him out to Sweden but he quickly became homesick and returned back to Greenock.

He then took up his former job at the Scott Lithgow Shipyard and accepted the position of Trainer with the Morton club where he remained there until his retirement in 1959. James Gourley spent the final years of his life pursuing his love of bowls until his death, at Greenock, in September 1970. He was 82 years old.

Playing for Everton more or less at the same time as Gourlay was Robert Cliffford. He was a centre-half and occasional full-back. Bob was another footballer from Ayrshire. Bob and Jimmy lodged together in Langham Street.

After a reserve match on 31st December 1910, Bob Clifford disappears from view. I wonder whatever happened to him.