The Hope of Everton

The story of another Scottish import, Hope Robertson, who played for Everton between 1890 and 1892, leaving the club shortly after the move to Goodison Park.

In November 1890, the Everton executive dispatched their club captain, Andrew Hannah, back to his native Scotland and instructed him to find a player who would strengthen the side and help them clinch the Football League Championship. They informed him he could offer a signing on fee of £50 plus a weekly wage of £3 and 10s a week. Hannah later returned with Hope Ramsey Robertson who had agreed to join the Anfield club from Partick Thistle.

He had been born 17th January, 1868, in the Govan area of Glasgow and was the third child born to Assurance Agent John Robertson and wife Catherine. The 1881 census finds the family now living in the Whiteinch area of the City where the young Hope, now 13, working as a rivet heater in a local shipyard. He began his football career with a team who played under the name of Minerva before joining a Partick Thistle club who, at the time, played on an area known locally as Inchview.

Robertson matured quickly and soon became a regular feature of the Partick Thistle forward line. In 1885, the Glasgow club entered the FA Cup for the first time but were beaten, in the first round by their all-conquering neighbours Queens Park. It was policy around this time for Scottish clubs to tour England during the Hogmanay Holidays and Hope Robertson was in the Partick Thistle side when, on the 1st of January, 1886, they took on a “patched up” Everton side before crowd of 2,500 spectators at Anfield. They proved too strong for the home team and beat them by 3 goals 1. The teenage Robertson, who was now an apprentice boilermaker, took part in several local knockout games, which proved to be unsuccessful between then and the end of April.

Next season the “Jags” again entered the FA Cup where wins over Blackburn Olympic, Fleetwood Rangers and Cliftonville saw them reach the last sixteen of the contest. Robertson, in the meanwhile, was again in the Partick Thistle side when they made their second visit to Anfield on New Year’s Day 1887 where a crowd of around 5,000 people saw a much-improved Everton side hold them to a 1-1 draw. The Scots then turned their attention back to the FA Cup competition where a trip to the Capital now awaited them.


The draw had given them an away tie against the former pupils of Westminster School in Central London. The school Governors, expecting a large crowd, transferred the game from their own playing at Vincent Square across Vauxhall Bridge to the more suitable enclosure at the Kennington Oval. Around 3,000 people watched a closely contested match that was settled in favour of the home side with a single goal from Sconnes. The next season the Scottish FA stepped in and banned all their member clubs from entering the English competition so Hope Robertson and his team mates were obliged to play all their competitive football North of the Border. He then spent another two uneventfully seasons with Partick Thistle before accepting what appeared to be a short-term offer to join a Royal Arsenal Club who had recently turned professional and moved on to a new enclosure at Plumstead.

It is almost certain the London club had their sights set on joining the recently formed Football League by bringing in players from Scotland and the North of England. They also had, for a second time, entered the FA knockout having previously being eliminated by Derby County. Hope Robertson helped himself to two goals as the Gunners began the campaign with an easy 11-0 win over local amateurs Lyndhurst. Wins over Norwich (Thorpe) and Crusaders then left Royal Arsenal with just one home tie to win if they were to reach the first round proper of the tournament. Their opposition, who played under the name of the Swifts, were the last of the noble amateur sides still left in the tournament.

Formed at Slough, the side consisted entirely of former public school men and had been formed under the guidance of the three Bambridge brothers, all of whom had previously played for England, who resided at Windsor. The Birdmen overwhelmed Royal Arsenal and beat them by 5 goals to 1. Robertson then returned to his native Glasgow from where he signed for an Everton side who were having problems with their forward line because an injury to Alex Latta. Robertson made his debut on 8th November, 1890, against Blackburn Rovers at Ewood Park playing on the right wing as Everton went down by 2 goals to 1. Nevertheless, it was reported that he had acquitted himself creditably and was retained in the Everton line-up when they faced Sunderland at Anfield next Saturday. The decision to switch him to centre forward proved a success as he scored the only goal of the game but was immediately dropped from the Everton side when Alex Latta returned from injury. 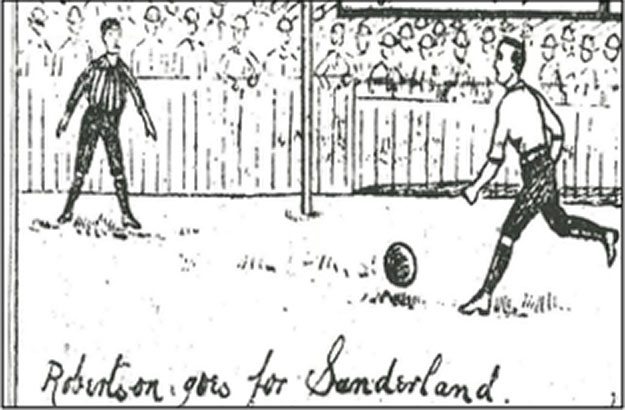 It was early in the New Year when Robertson next returned to the Everton first X1 where he helped them to a 4-2 home win over Notts County but was dropped again for the fixture against a Preston North End side who were fighting off the Anfield club's challenge for league leadership. The game, played before a capacity crowd at Deepdale, was a rough affair that saw the visitors lose by 1 goal to 0. The Everton captain, Andrew Hannah, was injured in the game along with Alec Brady and both men were unfit for the FA Cup tie at Sunderland. Hope Robertson was returned to the forward line.

The visit of Everton created an enormous amount of interest in North East of England where the local population filled the Sunderland enclosure, then located on Newcastle Road, to capacity. They were treated to a frantic first half of cup tie football and cheered as Campbell gave the home side a half time lead. The game was less hectic during the second period as the heavy pitch, thickly coated with sand, sapped the energy of the players and slowed down the play. Sunderland won the game by 1 goal to 0. Robertson, it was reported, was a rank failure at centre forward but was in the Everton party when they left Liverpool the following Friday for a three-match tour of the Capital which began with a game against the Corinthians at the Kennington Oval. 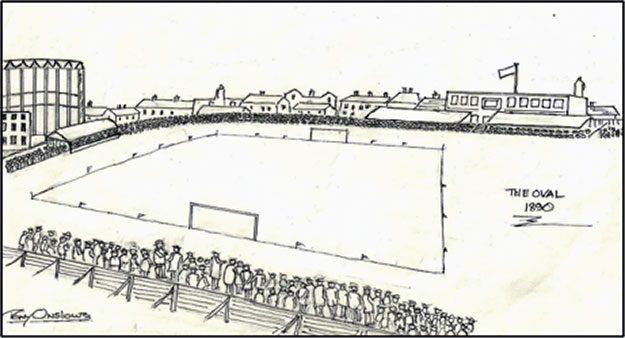 Hope Robertson, who played at centre forward, scored twice as the visitors beat their aristocratic hosts by 3 goals to 1. The young Scotsman, after a day of rest, then lined up to face his old club Royal Arsenal and scored again as Everton won by 5 goals to 0. Robertson was not selected to play for the first X1 again that season and must have been disappointed when Alex Lochead, a recent signing from Third Lanark, was given the nod ahead of him in the Championship-deciding game against Burnley at Turf Moor. (Everton lost the game but still won the Championship.)

Nonetheless, he was retained by the club at the end of the season. He then received a keepsake to remember his time on Merseyside when he was awarded gold medal having helped Everton to lift the Liverpool Senior Cup with a win over Southport at Bootle. During the summer, Robertson married Elizabeth Phipps at West Derby Registry Office and, when the new season started, was living, with her family at 41 Bulwer Street in Everton.

He began the new campaign playing in the reserve side but quickly returned to first team duty playing in the half back line against Preston North End at Anfield. Robertson continued to “perform well” in his new position which seemed to delight the club executive because he played twenty league games in the course of the season and scored once in the FA Cup tie against Burnley. When Everton left Anfield at the end of season he joined them on their trek over to Goodison Park and took part in the first Football League game there against Nottingham Forest. He then took part in another five Football League matches before making his last League appearance for Everton against Newton Heath in Manchester.

The two clubs had previously met on the 26th of September but the game had to be abandoned due to the diminishing daylight so the league committee, having debated the issue, decided that the game should be replayed on the afternoon of Wednesday the 19th of October. Everton, owing to an injury to Jardine, had no regular goalkeeper available so Hope Robertson filled the breach as his side won by 4 goals to 3. He was then dropped back in to the second X1. The recent signing of Scottish International Richard Boyle, along with Jimmy Jamieson from Airdrieonians, lessened the chances of first team football for the Glaswegian who then accepted the offer to join a Bootle side who were struggling near the bottom of the newly formed Football League Division Two.

He played a warm up game against South Shore of Blackpool before making his debut on 26th of November against league leaders Sheffield United at Bramall Lane. Robertson, who played at centre forward, could do little prevent his side from suffering a humiliating 8-3 defeat. He was then switched in to Bootle half line where he made another seven appearances as the as they hauled themselves above the re-election zone when the season came to an end. Next season Bootle appeared on the Division Two fixture list, where games against Liverpool awaited them, but withdrew at the eleventh hour and went in to liquidation.

Their decision left it too late for Football League committee to replace them, so the season had to be played out by an uneven number of fifteen clubs. Hope Robertson then returned to his native Scotland where he spent one season with Partick Thistle before returning to England where he joined Division Two outfit Walsall Town Swifts. He made his debut in the opening game of the season against Burslam Port Vale and made his twelfth and final appearance for the Midland club against Notts County on Christmas Eve, before returning to Scotland where he ended the season with Airdrieonians.

Hope and Elizabeth then must have returned to Liverpool because local records reveal that their first child, Hope Junior, was born there in 1905. The family then moved to the Humberside town of Goole and took up residence at 66 Boothferry Road. Hope Robertson found work as a plater in a local shipyard and was working at this occupation when died on the 27th of September 1927. He was buried in Hook Road Cemetery.