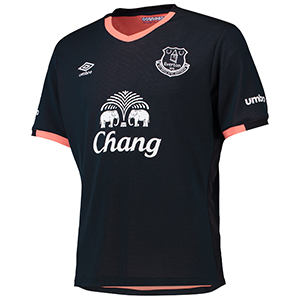 The club have unveiled a dark navy change strip for 2016-17, an attractive twist on the black of recent years following last season's white number.

The new away jersey is predominantly dark navy with a salmon colour on the inside layer, cuffs and V-neck rib collar, offering a striking visual contrast and is a nod to the 1890/91 season when the Toffees captured their first ever English First Division title.

Accompanying the jersey, the dark navy shorts have a tailored silhouette with a reduced volume waistband offering optimum comfort and fit. Contrast back detailing in salmon features alongside the Club and Umbro logos.

The dark navy socks feature a contrast salmon hoop and Umbro logo, with a cotton footbed providing optimum comfort for 90 minutes and beyond.

Like this season's home strip, the away shirt celebrates the Club's historic ground and includes the co-ordinates of Goodison Park inside the neck of the shirt. And like the year before last's black third strip, the badges and Chang logo are in white.

The new away strip is available to pre-order now from evertondirect.com, Everton One at Goodison Park and Everton Two in Liverpool One. It will go on sale on Friday 22 July both in-store and online and is available in men's, women's, juniors, infants and babies' sizes. .

All mildly interesting but as usual a foil for the lack of real news we seek... player acquisitions. We are three down with more expected to go... need to move on if our season is to start in August (as opposed to October)!

Sorry to be pedantic but last season's 3rd kit was the green one. Think I'm right in saying our last black kit was 2 seasons back and was our away kit.

I'm not sure when we can actually wear this. Presumably we will want to change our strip when our opponents are playing in blue (e.g. Chelsea, Leicester) but surely this strip is too close in colour?

The kit his horrendous, glum and cringeworthy. Just give me the yellow/blue any day.

Saying all that if we win in it then I don't give a flying salmon what colour it is.

The third kit will have to be completely different to be practical. Orange would be different.

"I really like the new kit. Sorry this is in crayon. They won't let me have anything sharp in here."

As far as I'm concerned, so long as the manager improves the team and our prospects by way of new acquisitions, if they want, the players can wear blue feathers topped off by a salmon loincloth.

Which brings me back to transfers. Thirty odd days to go before kick off.

I think that given the choice fans would prefer NO advertising on the kits yet that choice is not available, I can remember the days when even the club badge wasn't on the shirts, let alone adverts, much like the bizarre haircuts many players now 'sport' for reasons only they can explain.

The game itself is becoming a freak show and real entertainment is taking a back seat, as evidenced by the 2016Eurobore, only highlighted by Iceland and Wales, for excitement.

Not really sure why we needed the big build up and "teaser" to make us think it would be a different colour though.

Keeps someone in a job I guess.

Nowt's changed, boys... it's all cosmetic Kenwright none sense. Where's the substance?

And I thought it would have been a nice touch to mark the 30th anniversary of our last league title in the home jersey, which I received in the post a while back and isn't great. Some diamond detailing in the material would have been nice.

There's not even anything wrong with it, it's just a simple, plain design. Which bit could possibly be 'bloody awful'?

Or is ToffeeWeb just like therapy to some people, go on and moan about anything and everything no matter what it is just for the sake of it?

We can't even launch a kit without at least a substantial swell of negativity. Is being negative actually fun? Or are people just that fucking miserable?

Why does there have to be incessant whinging about every little thing?

It could look like something out of Tron and nobody would really give a toss as long as we win while wearing it.