Coleman claws back a point for lacklustre Everton 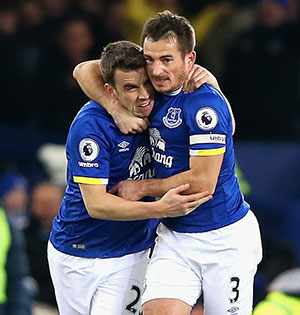 Seamus Coleman popped up with an 89th-minute equaliser to prevent Everton from losing at home to Swansea for the second time this year but it was scant consolation from a match Ronald Koeman's side were expected to win.

The South Wales side travelled to Merseyside sitting one place off the bottom of the Premier League and on the back of a poor run of just one point from four games under new manager Bob Bradley.

They proved to be anything but the walkover that Manchester United found comfortable hosts at the Liberty Stadium before the international break and their industry was rewarded four minutes before half-time when Phil Jagielka conceded another clumsy penalty.

The Blues' number 6 was bailed out by Maarten Stekelenburg at the Etihad Stadium last month when the Dutchman saved the two spot kicks his skipper had given away against Manchester City but there would be no mistake this time as Gylfi Sigurdsson confidently despatched his effort from 12 yards.

The Swans' opener arrived with a sense of inevitability for many among the subdued home faithful because Everton had failed to summon up the requisite imagination and purposeful football required to break their opponents down.

Jordi Amat went very close to giving the visitors the lead in the 18th minute after Lukas Fabianski had saved low at his near post from Romelu Lukaku but, despite their struggles going forward, it was Everton who had the clearest-cut chance of the first half.

Yannick Bolasie picked out Ross Barkley in the area with a cross that the 22-year-old touched past his marker but, having done the hard part, he dragged his shot disappointingly wide with the goal yawning in front of him.

Other than another Bolasie centre that was too strong for Lukaku and bounced over the bar off the Belgian before he could react, Koeman's team created little until just before the break. Bolasie was put in behind the Swansea by Lukaku but Fabianski made an excellent save to block his shot behind.

As expected, Everton came out of the half-time interval with more determination going forward but it yielded a number of set-piece opportunities but almost no real openings.

They were getting increasingly desperate in the closing stages as Stekelenburg denied Sigurdsson a killer second goal at one end when Coleman intervened at the other. Bolasie hooked the ball back into the Swansea box, Amat's attempted clearance looped up and the Irishman rose to plant a header beyond Fabianski's fingertips to level the game.

Bolasie almost won it in stoppage time but Amat cleared his shot off the line while Lukaku failed to test the ‘keeper with a soft drive seconds later and the Blues were condemned to drop another two important points at home.